Most professional music producers consider reverb to be an inevitable effect in modern music. Reverb enriches the audio signal by adding a sense of space, depth, and texture to it. Basically, it makes everything sound better. Modern times gave us a sea of choices when it comes to reverb, from ridiculously expensive hardware units to cheap software plugins. Without any doubt, an iconical reverb effect that was used throughout the better part of the 20th century and been a part of many famous records is the plate reverb created by EMI studios in the famous Abbey Road.

Introduced in the 1950s, plate reverbs have been a fixture of recorded music ever since. Used most prominently in the ‘60s and ‘70s by pioneering bands, including the Beatles and Pink Floyd, Abbey Road Studios original reverb plates were first installed in 1957 to complement the fixed reverberation times of the studios’ echo chambers. Later on, Abbey Road’s technical engineers tweaked these beautiful-sounding plates with a variable reverb time of up to six seconds, to perfection. Additionally, to keep noise to a minimum, EMI’s Central Research Laboratories designed unique hybrid solid-state drive amps for Plates A, B, and C. Moreover, Plate D was fully valve-powered on both drive and output stages, allowing a varied array of sonic characteristics, from warm and dark to lush and smooth.

Recently Waves audio offered us an impressive digital emulation of the mentioned plate reverb and called it Abbey Road Plates. In my opinion, this plugin unit is really a faithful copy of the real unit and in the next tutorial, I will talk more about it. So, let’s start by adding the Abbey road Plates plugin on the newly made MIDI channel within Soundbridge. 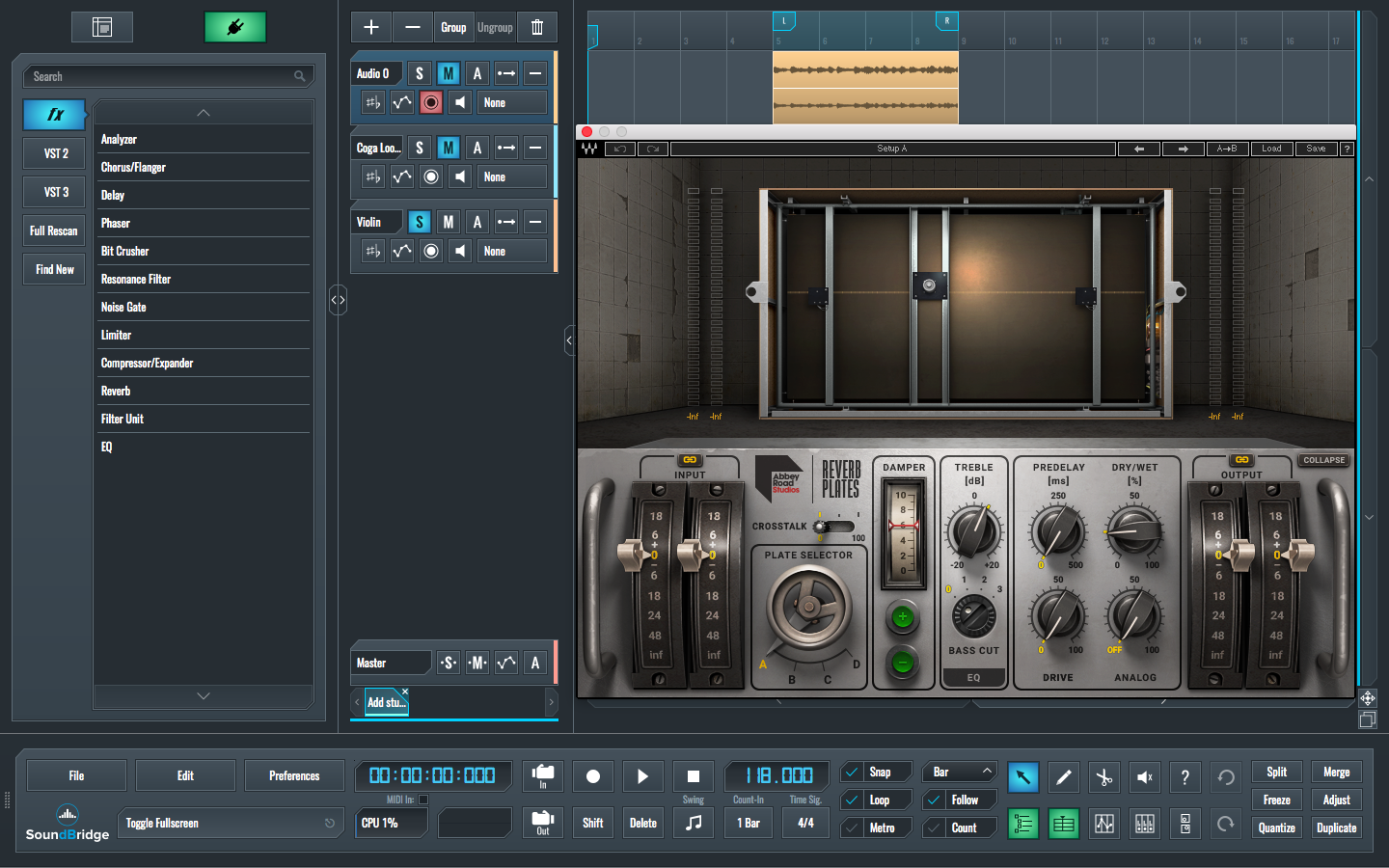 Upon opening of the plugin interface, we can see that the graphic designer really dedicated it to the looks of the original unit. Besides that, in the upper part, we can see the image of the plates in a room. Consequently, below this, there is a section with the controllable parameters. Furthermore, the left and right sides contain input and output parameters. The faders look like the ones on the original unit, which is a nice touch as well. What’s more, the middle of the interface contains a section for chaining the plates type, a damper section, built-in EQ and the classic parameters like pre-delay, DRY/Wet, drive and analog noise.

To conclude, I will show you how this special reverb unit sounds on different instruments, so check out the examples.