The Complete Guide to Understanding Compression 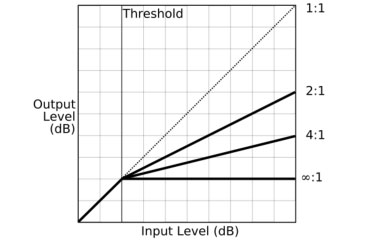 Today, many DAW users tend to operate compressors without enough background knowledge – without knowing what compressors “actually” do. Compression can be a blessing or a curse. It can make a poor performance sound tight or ruin the dynamics of a good performance. What’s more, it can polish the master output, or make it sound tiny and crushed. Let’s dive a bit deeper into it.

In the early days of radio, producers had to adjust levels manually. In an attempt to disrupt this archaic practice, the limiter was born – a device that automatically attenuates sudden peaks above a threshold to prevent clipping. To protect equipment, recording engineers adopted this idea and developed leveling amplifiers. Since limiting is a form of compression, one could say it initiated compression techniques.

In audio, compression is the process of reducing the dynamic range of an audio signal by squashing the loudest peaks in the signal and boosting the lowest peaks by a certain ratio. To put it simply, a compressor is a dynamic range processor. The parameters given on a compressor are typical:

There are some exceptions and additions when it comes to different gear.

VCA: Voltage Controlled Amplifier compressors use an integrated circuit to allow for very precise control. They are less colored and do not suffer from the distortion side-effects that other compressors do. This makes VCAs ideal for a lot of tasks.

Opto – Compression: Opto (short for optical) refers to the light-sensitive circuits that control compression amounts in this piece of gear. Optical compressors have a unique slow-acting attack while the release has an almost two-staged quality to it. The device begins releasing quickly but is ultimately slow in getting the signal back to its uncompressed level

FET: Field Effect Compressors use transistors to emulate a valve sound with high reliability at the cost of a higher signal to noise ratio. They are popular on vocals and great for drum compression.

As we are – and have been for quite some time – in a digital era, most audio processing equipment (including compressors) have digital functionality. Let’s get a closer look at some digitally emulated techniques that are proved to be useful throughout this period of time.

Serial compression, unlike parallel compression, does not require duplicate tracks. It simply feeds the entire output of the track into the input of the compressor so that 100% of the sound is affected.

For example, take a vocal you want to process and insert a compressor onto its channel strip. Set the threshold pretty high so that you do not lose the character of his/her voice. Then, add another compressor to address the overall level. Give that one a slower attack/release, a lower threshold, and some heat on the gain. Experiment with the order of the two compressors to achieve different coloration.

Let’s say we have a drum loop we want to process. We could insert a compressor on the channel and compress the entire signal like before, or, use another very neat technique called parallel compression. In this configuration, the dry signal is mixed with the compressed signal, preserving the genuine character of the loop while still impacting the listener with compression. This way, you can control the mix of dry and wet sound. Many VST compressors today have a Dry/Wet control which lets you balance between processed and original signal. Keep in mind, when a device has a variable dry/wet parameter set to anywhere other than 0 or 100, that in it of itself means it is a parallel effect, even when it is inserted serially.

This is a great way to “glue” the elements together. By busing multiple tracks to a channel with a compressor on it, you are forcing them to move and change together; thus, creating the illusion of a tighter performance. Group compression is great for mending sloppy ensemble performances and making multiple drum samples sound like one person is playing them.

A set-up in which the compression ration is infinity to 1. Meaning, no matter how loud the input is or damaging the distortion is, the output will be flattened. This effect was more desirable in the 90s and early 2000s than it is now but is still evident in music from artists like Daft Punk and Justice.

A multi-band compressor is nothing more than a compressor that divides the spectrum into 4 (typically) bands and allows you to compress the bands independently. It is like an EQ and a compressor in one. You could use it on a synth track in which some frequencies ranges are peaking (or are too low) in the overall mix. This way you can locate that specific range and apply compression while preserving the dynamics of the rest of the spectrum.

Side-chain is a feature built into most compressors these days. It allows for another track in the mix to trigger or “key” compression. Originally, this technique was used to automate level balance. For example, instead of recording volume automation on a track that needs to get out of the way of a vocal, you can use a side-chained compressor on it with the vocal as the “key”. This way, when the vocal passes the threshold, the accompanying track will duck for it automatically. This technique is used a lot in commercials to automate the balance between narration and background music.

Today, this effect is almost exclusively used creatively. It imposes that pumping, gasping effect you’ve probably heard in just about every pop production since 2010. The kick drum squashes interfering instruments each time it hits then pulls them back up like a ball on a chain.