The tape stop effect, as it’s known nowadays, has existed for a long time. It has its roots in old reel-to-reel machines and tape recorders that when turned off, would continue to play the tape at a progressively slower speed until it came to a full stop. It has gained a lot of attention in hip-hop and electronic music releases. If you have listened to popular music in the last few years, you’re likely to have heard it on a track or two. In the next tutorial, we will show you how to achieve that effect on your track.

As usual, we have made a short sequence within our SoundBridge: DAW, which has most of the essential elements of a full mix. Let’s have a quick listen. 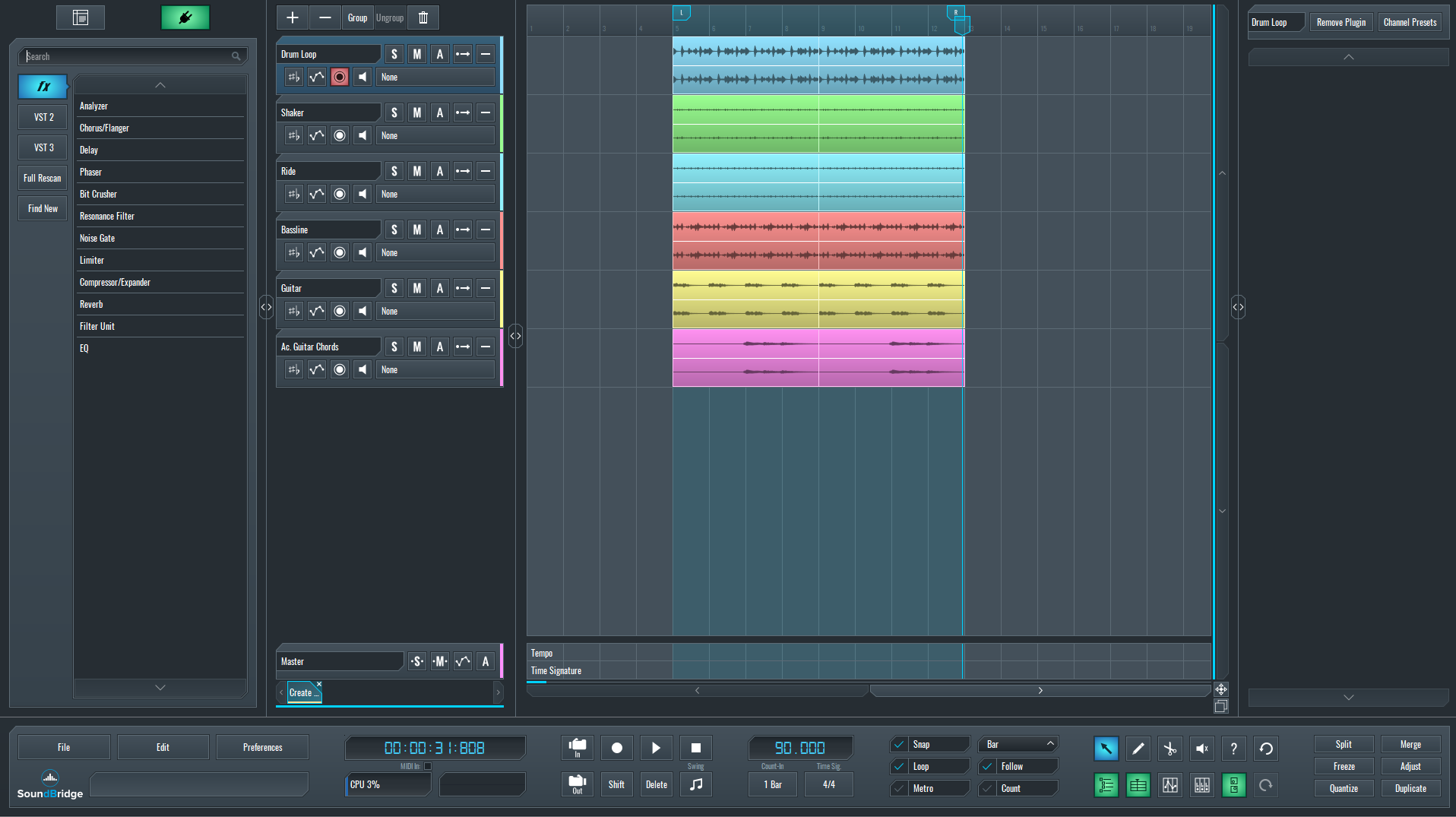 Some argue that the tape stop effect is often overused. However, if you’re a hip hop, electro, glitch, or pop producer, you might get a request for it at some point. At its core, the tape stop effect is just a pitch down effect. There are many VST effects that offer a tape stop effect, so feel free to explore which one suits you best. For the sake of this tutorial, we have selected the Effectrix by Sugar Bytes.

Since we want to apply the tape stop effect on the whole track, the best solution would be to group all the channels. On the newly created group, which we called “Tape Stop Group” we will add an instance of the Effectrix plugin. 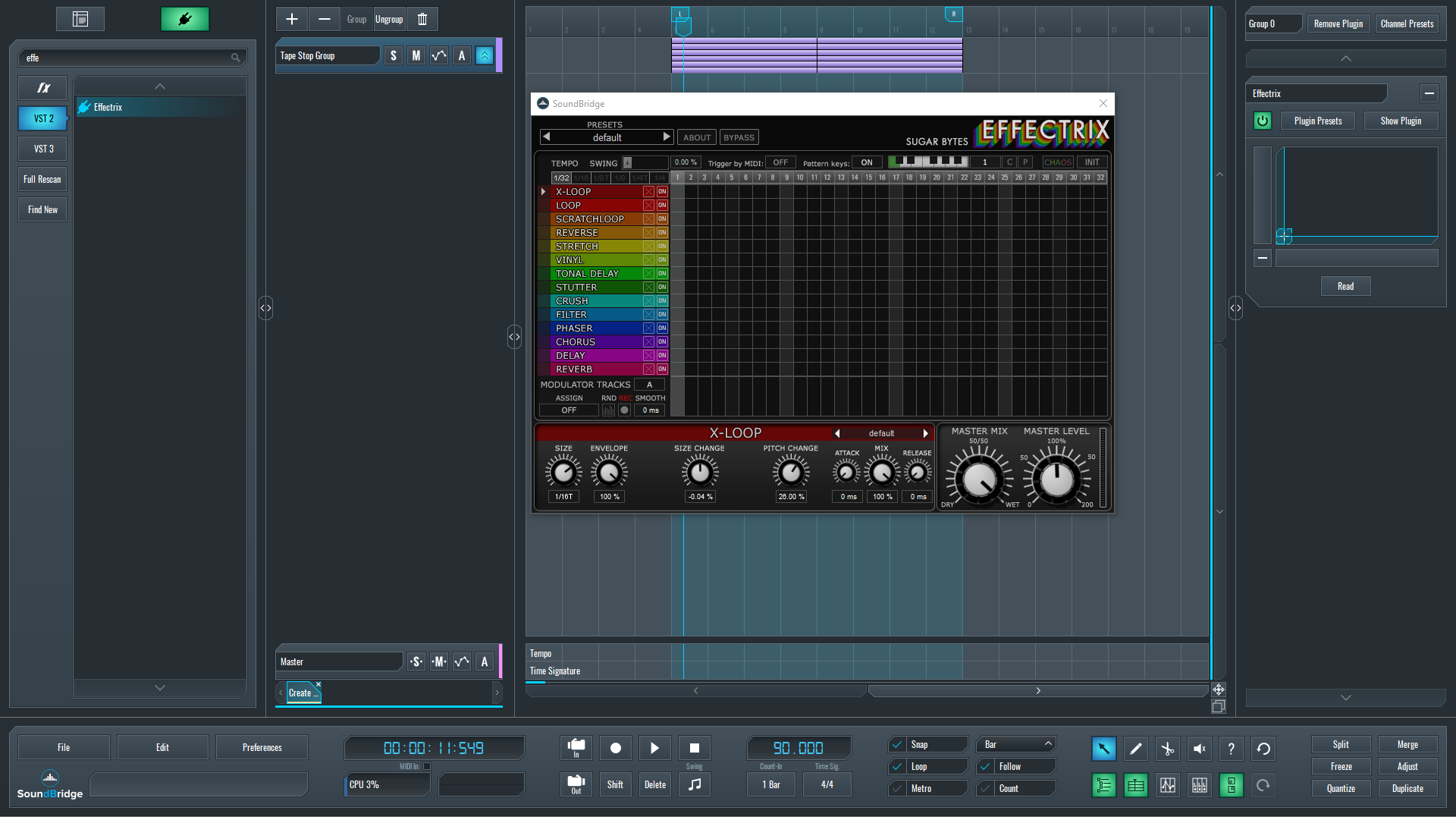 Effectrix is a rather complex plugin which can be considered a multi-effect. However, in this tutorial, we will not bother with its full potential. Instead, we will just focus on just one section of it. If you pay attention to the colorful section of blocks on the left part of the interface you will notice one lane called “Vinyl”.

When we click on it, a set of parameters appear in the bottom section of the interface. This section contains “Time”, “Size” and “Slope” as main parameters. Besides them are “Attack”, “Mix” and “Release”. The most important parameter to mention is the “Stop” mode. When turned on, it is the one actually engaging the tape stop effect. You will notice that the “Size” parameter is bypassed. We won’t deal with it here.

To set the impact and duration of our tape stop effect, we will have to look at the middle part of the Effectrix interface. This section is reserved for the sequencer. Here, you can write blocks that will trigger the desired effect at a certain point in time. Since we want the tape stop effect to start towards the end of our sequence, we will write a corresponding block in the sequencer, on the “Vinyl” lane.

Lastly, if you look to the upper part of the overall interface, you will notice the “Tempo” parameter. Just below it, you can switch between 1/32, 1/16, 1/8T. 1/8. 1/4T and ¼ subdivision. This setting will effectively determine how long the Effectrix sequence will last. In our case, we will set it to ⅛. 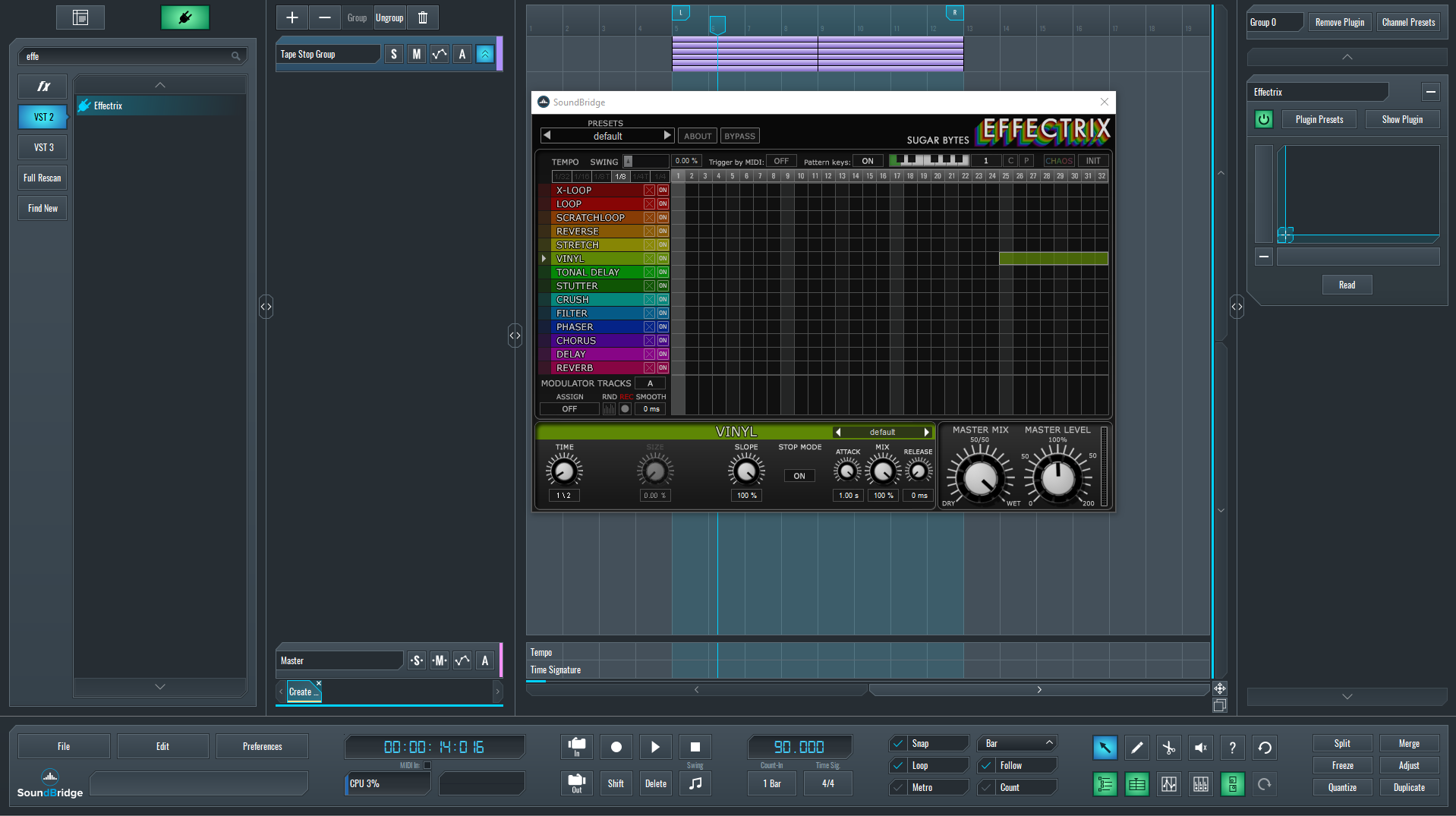 Let’s listen to our sequence again with the tape stop effect applied.

We could also add a bit of reverb to the portion of the sequence where the tape stop effect transition is ending.