In movie production, most of the audio work is done in a separate process after the filming stage. Actors re-record lines (dialogue replacement) and the audio team layers the soundtrack and Foley over the film. Foley, by definition, is the process of creating sound for video and film.  Foley artists (“walkers”) don’t deal with music; but rather, short sound clips and effects that mimic what would happen in real life. For example, if an actor pulls keys out of his pocket, that sound of keys rattling will be recorded in a studio and retrofitted to match the video. In this article, I will make a kick and snare using Foley layers to show the unconventional application it has in music – more specifically, electronic production.

To begin, I’m using the sound of a hammer hitting a chair as my mid-range layer. In addition to this, I’ll be editing and processing my samples in Native Instruments’ Battery 4 because it gives me a consistent way to work with all the samples together.

~ This is how it sounds unprocessed.

Firstly, I’ll change the articulation of the sound using the volume envelope. I give it a short percussive tail to make it sound more like a drum hit.

Then, in the effects section, I’ll add some saturation. Consequently, that’ll boost the signal (which is relatively quiet) and will give the sound more “body” by adding harmonic content and distortion.

The LoFi section can be dangerous as it can degrade your sound, which is, ironically, the idea of LoFi processing. I’ll use it to add some noise and thicken up the sample. This will help blend the different layers of our kick together.

Unfortunately, the kick is not potent enough in the low end for me to use it as the low part of the kick. Keeping that in mind, I’ll high-pass the sample to make room for another sample underneath it.

The volume envelope did a lot of good in shaping the sound to be more like a kick drum. However, it still isn’t quite tight enough. To solve this, I’ll use a Transient Master to reduce the sustain and boost the attack.

With layer 1 ready, I’m going to use this sound of knocking on an acoustic guitar to fill in some of the low mid.

Since the sound is taken from a whole loop, I have to isolate the hit that I want before I can go on to affecting the sound.

Now that I have the sample on its own, I’ve gone into the volume envelope to make it shorter and punchier like the first sample. Note that having different lengths for samples can make it easy to tell them apart, which is not a good thing if we want the kick to sound coherent and organic.

After the saturator, I activated the filter and set it to a four-pole low-pass. The purpose of this filter is mainly to get the two samples out of the way of each other. I prefer the high-frequency content of the first layer, and so I’ve decided to eliminate those frequencies in the second layer to prevent any conflict. 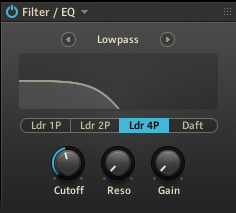 Finally, I added the Transient Master at the end of the signal chain to tighten it up as I did with the previous one. I also lowered the output by about -2.4 dB because the transient master is quick to distort and boost the volume further.

Now the kick sounds good, but there still isn’t any substantial low end. I’ve decided to layer a low-passed kick to fill in that space.

To glue these layers together, I added some effects to the master channel. The high shelf will help bring out some of the highs since they are only coming from one sample. The compressor, transient master, saturator, and limiter really aren’t doing much but applying some effects to a master bus that affects all your kick layers. I am sure you will agree that they can really help to make the layers more coherent and make the kick sound as one.

Here is how the kick sounds all together:

Now that we have a solid kick, it’s time to work on the snare. As my first sample, I’ll be using a recording of a hammer hitting a desk in a warehouse.

As usual, I start by setting the volume envelope. I don’t want to do much to the sound because it already has the qualities of a snare. With the decay knob, I’ll shorten it ever so slightly to get rid of some of the ambiances from the warehouse.

I’ll add some saturation as I’ve done with the other sounds to add some harmonic content and boost the signal.

The filter will help to eliminate environmental mud in the low-end of the live recording. 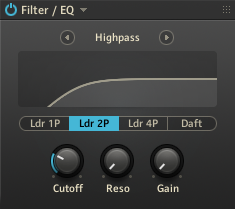 This layer and the snare in general already sound pretty complete. However, the ambiance that was captured when recording the sample is making it sound distant. To reduce this some more, I’ve shortened the sustain of the sound using the transient master.

~ Here’s how our layer sounds now.

The snare is sounding good but, texturally, it’s not consistent with our kick. Furthermore, the white noise introduced by the LoFi in the first layer of our Kick is missing from the snare. To fill this in, I’ve found a sample of a spray can I’m going to layer with it.

Moving forward, like with layer 2 of the kick, I have to isolate part of the sample that I want to use since it’s actually a loop with multiple sprays. I’ve highlighted one of the sprays in Battery 4’s sample view.

The sample has a consistent sustain. For this reason, To make it sound more like a drum hit, I have to shorten the decay.

Back in the effects section, I’ll add some noise using the LoFi module, as I did to the first layer of the kick. Not only will this help thicken up a sound that is a little thin, but it will also make the snare more consistent with the kick. The LoFi has really shaped the way the kick sounds.

As I mentioned before, a good way to make these different sounds fit together is by applying effects to the master bus. I’ve implemented a compressor, transient master, and saturator. However, the saturator is the only one doing a substantial amount of work. Working with sounds that were recorded in entirely different environments means they will immediately sound out of place when played together. This step helps to fix this issue.

~ And here’s an example of the drums with some other elements.