Good drum mixing is a telltale sign of mature production and often the first thing labels will focus on when listening to a demo. With the status that house music has reached in recent years, artists and sample companies have been quick to saturate the market with sample packs to satisfy this particular genre. Unfortunately, the same has yet to happen for more underground genres like Dubstep and Drum & Bass. For this reason, this article will provide you with the knowledge to build your own Dubstep drums.

First and foremost, people often overlook the process of choosing the right samples. In the electronic production community, there seems to be a common misunderstanding that having good drums comes mostly from good sample processing (WRONG!). Therefore, if the samples you’re working with don’t have the right frequency content or are corrupted by a weird stereo image or artifacts, there is not much you can do to fix them. As they say – “garbage in, garbage out”. Keep in mind that, in a lot of cases, drum samples will be layered. Don’t lose your mind over finding the perfect sample; the final sample can be a combination of several, great quality samples.

The kick is going to be very central in your mix. So, if you’re trying to build a strong drum kit to use over your drop, eliminate samples that are panned unconventionally or have a strange stereo image.

Since we’re talking Dubstep, the kick is going to have to protrude through all your nasty bass and sub-layers. That means you should keep your eyes out for kick samples that have an impact between 50 Hz and 60 Hz.

Don’t forget about the highs. Your kick has to fill the frequency spectrum. A common mistake is to use deep kicks that have no high-frequency content. This creates a strange contrast with the rest of your synths and basses, especially if you’re using sidechain compression – whereby, the synths duck when the kick hits but that kick does not occupy frequencies that are missing from the spectrum.

Although articulation can be tweaked to a certain degree, watch out for the delay between the transient and when the sub of the kick (50 Hz – 60 Hz) hits. The reason for this delay is because digital kicks are often designed by putting a pitch envelope on a bass. Depending on the attack of the envelope, the kick can actually reach the fundamental frequencies sooner or later than desired. You don’t want the attack to be too long, because, the sub frequencies of your kick will end up conflicting with your sub-bass.

A big snare will have a frequency peak between 150 Hz and 200 Hz. Keep an eye out for samples that have some body.

Producers often mistake the tail of a snare to come solely from the reverb. However, you should apply reverb only to the higher frequency layers of your snare.  A better way of getting that tail is simply to layer white noise samples or rides that have this high content and decay.

Keep away from over-compressed snare samples. A lot of sample packs contain snares that sound pleasingly loud but have lost their transient as a result of over-compression or limiting. For your snare to cut through the mix, it has to have a defined transient and maintain a certain dynamic range.

Try going through some clap samples. Adding claps can widen the snare a bit and give it a more unique sound. Clap samples can be high passed – acting as a top layer for your snare.

Once you’ve collected a solid group of snare and kick samples, it’s time to identify what their strongest attributes are and compile them into coherent samples, respectively.

Using a free third-party spectrum analyzer like Voxengo’s Span, we can identify a sample’s qualities:

With these qualities, we can layer the different samples. As you superpose the samples, use an EQ to filter out any conflicting frequencies. Play with the envelope to ensure a clean, transient body and tail.

For this demonstration, I’ll be using Native Instruments’ Battery 4 to layer my samples.

First, I’ll open up an instance of Battery 4 and load up the samples that I’ve found.

Although you can use more samples in this process, I am only using two. The first sample seems to have some sort of artifact or unwanted frequency around 1 kHz. I am going to EQ these frequencies out and then use the second sample to fill them in.

First off, I am going to shorten the sample length in order to prevent the tail of the kick from interfering with the sub.

I will do this by using the volume envelope in Battery’s “Main” tab. I’ll set the same envelope for both kicks so that they sound cohesive. 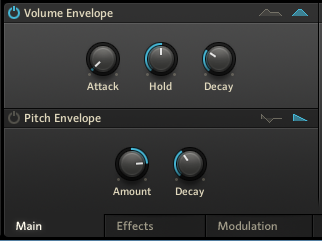 Next, starting with the first kick, I am going to get rid of that problematic frequency.

In the effects tab, I am going to select “Band 3 EQ” and turn the gain down around 1 kHz. This should eliminate that problem frequency.

This is how the sample sounds now, notice that the resonant sound is gone.

Finally, I am going to apply some effects on Battery’s master bus in order to mesh the two samples together a little better.

I’ll start with adding a little compression; paying special attention to the attack in order to conserve the transient. Then, I’ll add a little saturation, set to “drums” to give the sound some more energy. When I layer the two samples together, we have our final kick drum.

Now that I have my kick, I will load up another instance of Battery 4 and load up the snare samples I found. The first snare sample I found is going to serve as the main snare. I will affect the other snares around it to complement it and strengthen it.

Since the first sample is shifted and starts only halfway through the clip, I will use the sampler to change the playback starting point.

That way, the sample will play as soon as it is launched.

I want to use the second sample as a high textural layer to give the snare some character.  I’ll set up a high pass filter in the effects tab and move the cutoff to about 550 Hz so that it will not mess with the low end.

Moving on, I want to use the third sample as a white noise tail for my snare. This enables me to ease up on the reverb and still get that characteristic snare articulation that is often heard on Dubstep tracks. To get rid of the transient, I’ll move the sample starting point along to the tail of the sample.

Next, I’ll high pass the sound, just like snare 2, to keep it out of the way of the main snare.

I will use the last snare to strengthen the fundamental frequency of the overall sound. However, I don’t want it messing with the transient of Snare 1, so I’ll increase the attack. 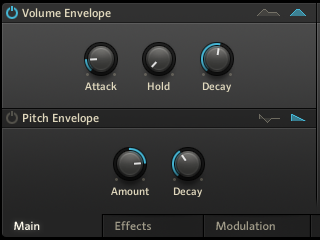 For the final step, I’ll add some effects on the master bus – as I did with the drums – to blend the layers together.

And then when I play all the layers together:

So there you have it! Hopefully, you’re a little more familiar with the process of gathering samples, layering, and mixing them to create some Dubstep drums. As you can probably tell, the way you affect the samples will depend greatly on the samples themselves. Additionally, you’ll have to train your ear by going through this process many times and trying different things. To conclude, use the tips above when searching for your samples and mixing them. They’ll set you on the right track. Happy Mixing!