How to make a Dirty Dutch House Lead?

Dutch House is a sub-genre of Electro-House that was made popular in 2010 by guys like Afrojack, Hardwell, and Laidback Luke. However, it distinguishes itself from mainstream House by using more rhythmic elements and often a characteristic detuned lead. As a producer, building up a repertoire of sounds that are popular in various EDM genres is very useful as it can introduce a sense of familiarity in your tracks. Therefore, if your listeners can identify certain sounds you use, it will make it catchier and, in general, more memorable.

What sound are we talking about?

The lead we will be making is the classic, detuned and gliding, dirty dutch lead. It has been used in countless productions including THIS remix by R3hab on the first drop. Furthermore, I will be remaking it in Massive, but you could do it in just about any analog or analog modeling synth.

All in all, I think that this dutch house lead is relatively easy to recreate.

1) Firstly, load up a new instance of Massive and, keeping the waveform on Square-Sw1, set the oscillators to saw and square waves respectively by changing their wavetable positions (Wt-position).

2) Then, set 5LFO to modulate the pitch of each oscillator and turn up the range to around 0.50. The greater the controlled range, the more unstable and dissonant the patch will sound. 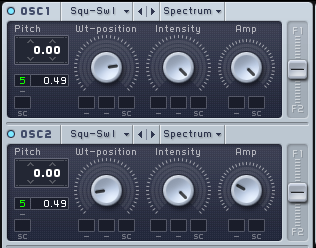 4) In addition, in the amp envelope – 4ENV – make sure the sustain is all the way up so we don’t lose any energy after the attack.

5) One way that this lead produces its characteristic effect is by gliding between notes. To enable this, go to the Voicing tab, set the voices to Monophon and Legato. Then, turn up the glide time to around 12 o’clock. The time determines how long it takes for a note to glide to another note. This glide is initiated by overlapping the actual MIDI notes.

6) Moreover, to add more detune and some stereo width to the sound, add a second voice and turn on Pitch Cutoff and Pan Position. The Pitch Cutoff will detune the voices, and the Pan Position will pan them right and left respectively some amount.

Now the patch is really taking shape. But it sounds very dry. Using the master effects slots, insert a Small Reverb and a Chorus Ensemble.

7) Turn the Dry/Wet of the reverb and chorus down and turn the depth of the chorus down. This will give the sound some space, which is important because otherwise, it is pretty thin.

8) Additionally, to thicken it up a little, add a hardclipper on INSERT 1 and some feedback. The hardclipper will bring out the “square” characteristic of the sound by flattening out the wave at the top and bottom (distortion).

9) Now that we have the patch let’s arrange a simple melody for it. It is important to keep it rhythmic and make use of the glide that we’ve enabled within Massive. As I mentioned earlier, overlapping MIDI notes exaggerates the glide effect between them. This particular melody is in the key of G minor (or G Phrygian if you consider the Ab as a scale tone). 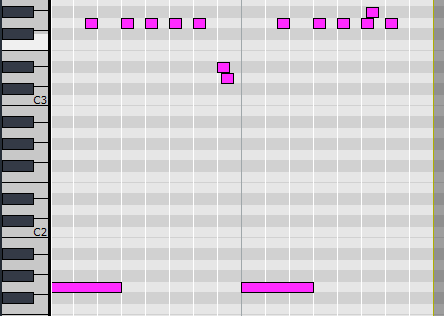 10) The first glide is 2 octaves long whereas the ones in the upper register are only a semitone. As a matter of fact, I should not use one single glide time setting for all of this. To use the glide more appropriately, I automated the glide time in SoundBridge. 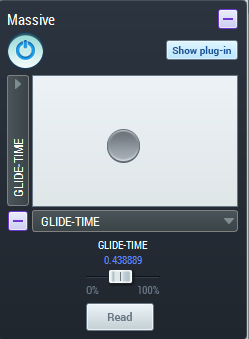 Here’s how the patch sounds with automated glide time…

And finally, here’s an example in context!