An Introduction to FM Synthesis

Frequency Modulation synthesis (FM synthesis) is a method for sound creation that generates very complex and unique timbres containing many spectral components. As a matter of fact, the first FM algorithm was invented by John Chowing in 1967, and the technique was made popular when Yamaha released the first commercial digital synthesizer, the DX7, in the early 1980s.

This is what a frequency modulated waveform looks like in NI FM8. Notice the number of cycles per time period varies periodically.

This timbral change happens because modulating pitch of an oscillator at an auditory rate adds spectral components to the output called “sidebands”. In addition, the amplitudes and position of these “sidebands” can be calculated mathematically using “Bessel Functions” –  functions involving the ratio of the carrier frequency to the modulator frequency (C:M ratio), “frequency deviation”, and the modulation “index”. However, no math is necessary to create sound. This is the jist of it…..

For example, if your carrier (the center frequency) is 220Hz and your modulator (the control oscillator) is 440Hz, the C:M ratio is 1:2 and the result will be harmonious. Some FM synths like NI FM8 modify the modulating frequency to match the ratio for each note played so that the timbre stays more or less consistent across the keyboard. FM8 also depolarizes sidebands to avoid confusion (it makes all the frequencies and amplitudes positive). Negative sidebands are only necessary for understanding Chowning’s mathematical models for prediction.

Where are these parameters in FM8?

FM’s “matrix” is where you decide the number of oscillators (FM8 calls them Operators). You can also change the depth and routing in the “expert” section. 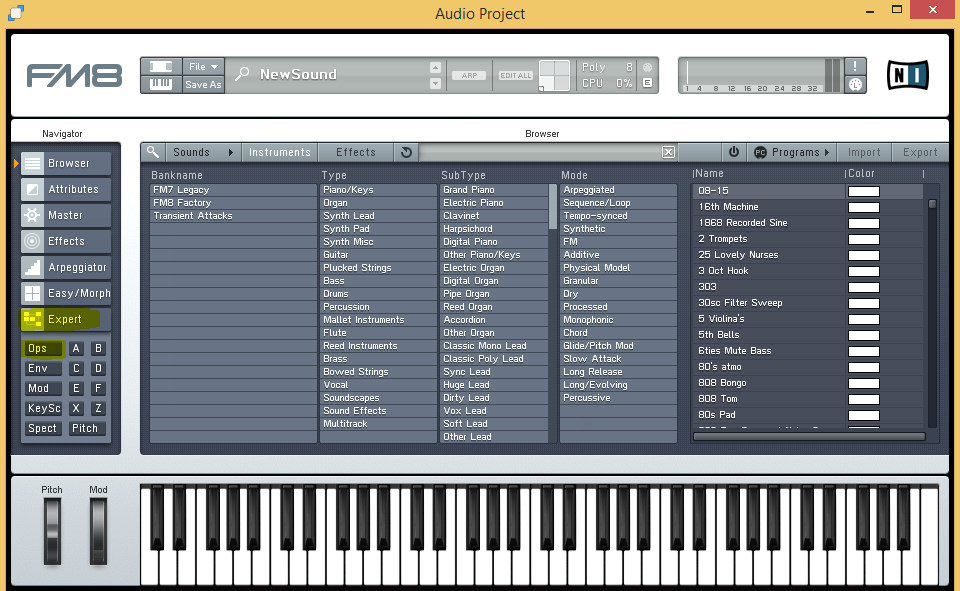 In the picture above, the lighter colored bottom row is the output. Any operator that is routed to that (F in this case) will be “carried”. Right click on operators to enable them. Moreover, to modulate an operator, click and drag in the box that “lines up” with both operators, like the “33” box above. “33” is arbitrary. You can select any value from 1 – 100.

In addition to this, within the expert tab, you can determine the C:M ratio in the highlighted box below. Each operator can have its own ratio; however, having a ratio other than 1 on the carrier will transpose the fundamental frequency.

FM8 allows the user to customize the temporal envelope (amplitude over time) of each oscillator. This is useful when trying to emulate bell-like and “plucked” sounds because most of the noisy, inharmonic energy in these sounds exist within the initial impulse, leaving the tone to ring and decay over a significantly longer amount of time. On the contrary, making ambient, evolving, spacey sounds merits linking envelopes together. These sounds don’t need that initial, characteristic impulse because there is no distinction between the sound and what caused it. For further temporal control, try enveloping the filter (operator Z). Here is where you’ll find the enveloping options in FM8.

So, here are a few basic patches I made in FM8.