The Doppler effect (or the Doppler shift) is the change in frequency or wavelength of a wave in relation to the observer who is moving relative to the wave source. The effect got its name after the Austrian physicist Christian Doppler, who described the phenomenon in 1842. A common example of Doppler shift is the change of pitch you hear when a vehicle sounding a horn approaches and recedes from you. Compared to the emitted frequency, the received frequency is higher during the approach. It is identical at the instant of passing by and lower during the recession.

Exploring sound with the Doppler effect

With the Doppler effect, you can explore new dimensions of sound and movement. It is possible to create the illusion of traveling through space or the rush of a passing train. Furthermore, with Doppler, you control the frequency change, speed, and distance from your sonic source with pinpoint accuracy. One of quite old software plug-in units, but at the same time really easy to use, is definitely Doppler by Waves audio. In the next tutorial, I will try to introduce the plugin and to show you some practical examples.

As usual, we will start by adding a new instance of the Doppler on a newly created audio channel within the Soundbridge: DAW, which contains a simple drum loop. 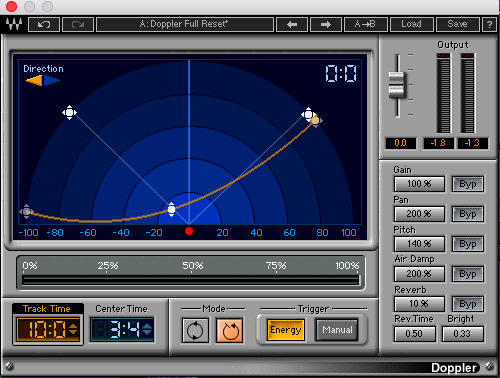 Space display is taking the main part of the Doppler interface. This window shows a “field” in front of the listener. He is always located at the 0,0 point (indicated by the red dot). A sound that is moving from the Start to Endpoint will be shown in this space display, along with the start/ end points. Additionally, the Moving Cursor will travel on the Track.

Direction is shown in the upper left of the Space Display. The two arrows which control the direction of Travel on the Track.

Elapsed time in the upper right of the Space Display is the elapsed time counter which resets at the beginning of each Doppler cycle.

Track is presented as the orange line as seen in the Space Display shows the path of the sound source as if it were moving. The Track has start and end points, and the center handle.

Mode choose either continuous cycling or one-shot behavioral modes. Continuous will simply repeat the Track Time and Doppler process over and over; one-shot mode will start when the process is triggered, either by Energy (triggered by the threshold) or Manual.

In the right part of the interface, listed vertically, there are additional parameters which are controlling gain, panning, pitch, and reverb. Also for the reverb, the connected parameters are air dump, reverb time and brightness. Moreover, each of these controls has an associated Bypass button for easy comparison or elimination of that effect.

After the initial introduction let’s hear this awesome plug-in in action!