Cinematic music production is, without any doubt, a vast industry. Its approach to sound processing is, in many cases, much more complicated than producing a regular pop tune. Scoring and layering of many instruments is often a time-consuming process. In earlier decades, most of the sounds used in cinematic music required a live orchestra, expensive studio recording, and lots of other aspects necessary to produce a great sounding movie theme, for example.

Recently, we were introduced to sound banks that contain pre-recorded live instruments and cinematic drum ensembles. As time progressed, these soundbanks sounded more and more realistic, offering a lot of options for further sound manipulation. One of these great-sounding sound banks is Ethnic Drum Ensembles by Heavyocity.

So, we have created a short loop in the SoundBridge: DAW, and we will enrich it with drums from Ethnic Drum Ensembles soundbank. Let’s fist hears how the loop sounds without drums.

The next thing to do would be to open a new instance of Kontakt player and place it on a new MIDI channel in SoundBridge. Additionally, in Kontakt, we will choose a new Ethnic Drum Ensembles bank. As mentioned before, the palette of sounds that this bank is offering is enormous. However, for this purpose, we will select the “Ethnic Mid Ensemble“ preset and make some drum sequences which we will hear next.

The central part of the interface consists of several sections. On the left side, we can see the part of the effect (Delay, Modulation, Reverb, and Distortion). Moreover, the center section contains three parts. The Twist is used for further modulation, Mix, which allows us to mix between 3 different microphone levels and Punish, which is a useful compressor/distortion processor.
The right side of the interface is reserved for ADSR controls of 3 channels. Lastly, on the top, we have an equalizer and T-Fx section, which contains more effects (distortion, filter, filter, panner, and delay). 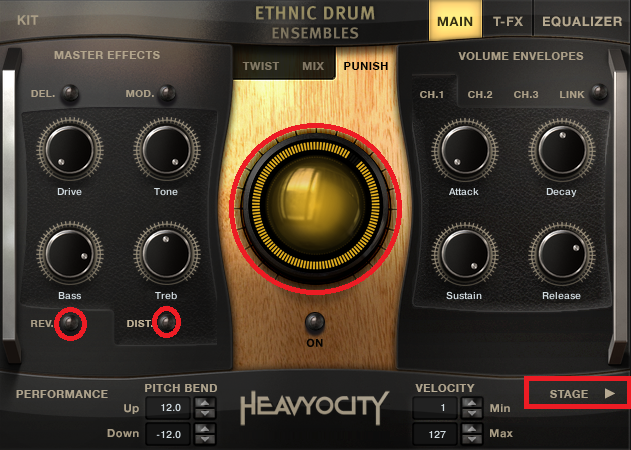 For this example, we will use reverb and distortion from the left side, marked in red. Furthermore, we’ll compress the overall sound with the Punish effect. On top of all of that, we’ll pan the positioning of different triggered drum sounds by entering the “Stage“ section, which you can see in the bottom right corner of the interface. 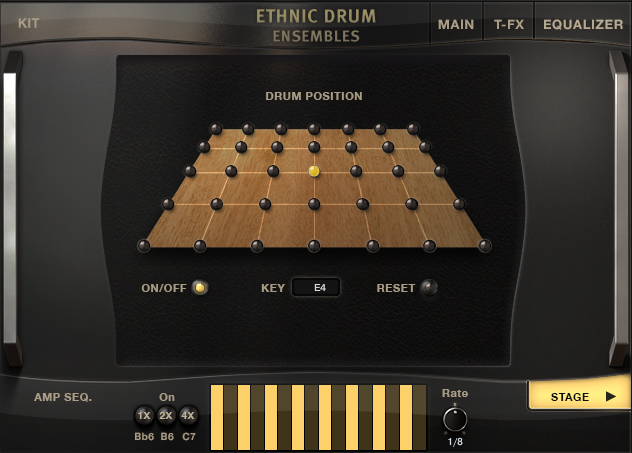 In the Stage section, you can easily position the individual drum sounds by selecting the dots in the upper field. By doing this, the sound will become more realistic. After final processing, let’s hear now how this drum sequence sounds, the first solo, and then with other instruments in the mix.