How to Properly EQ the Kick Drum

Firstly, we will make a short loop of a kick drum sample on the newly created audio channel within SoundBridge: DAW. We have selected this kick drum sound since it has a lot of low ends, kind of a room reverb layer underneath it, as well as some resonant peaks which need processing. Here is an audio example of how the kick drum sounds unprocessed. 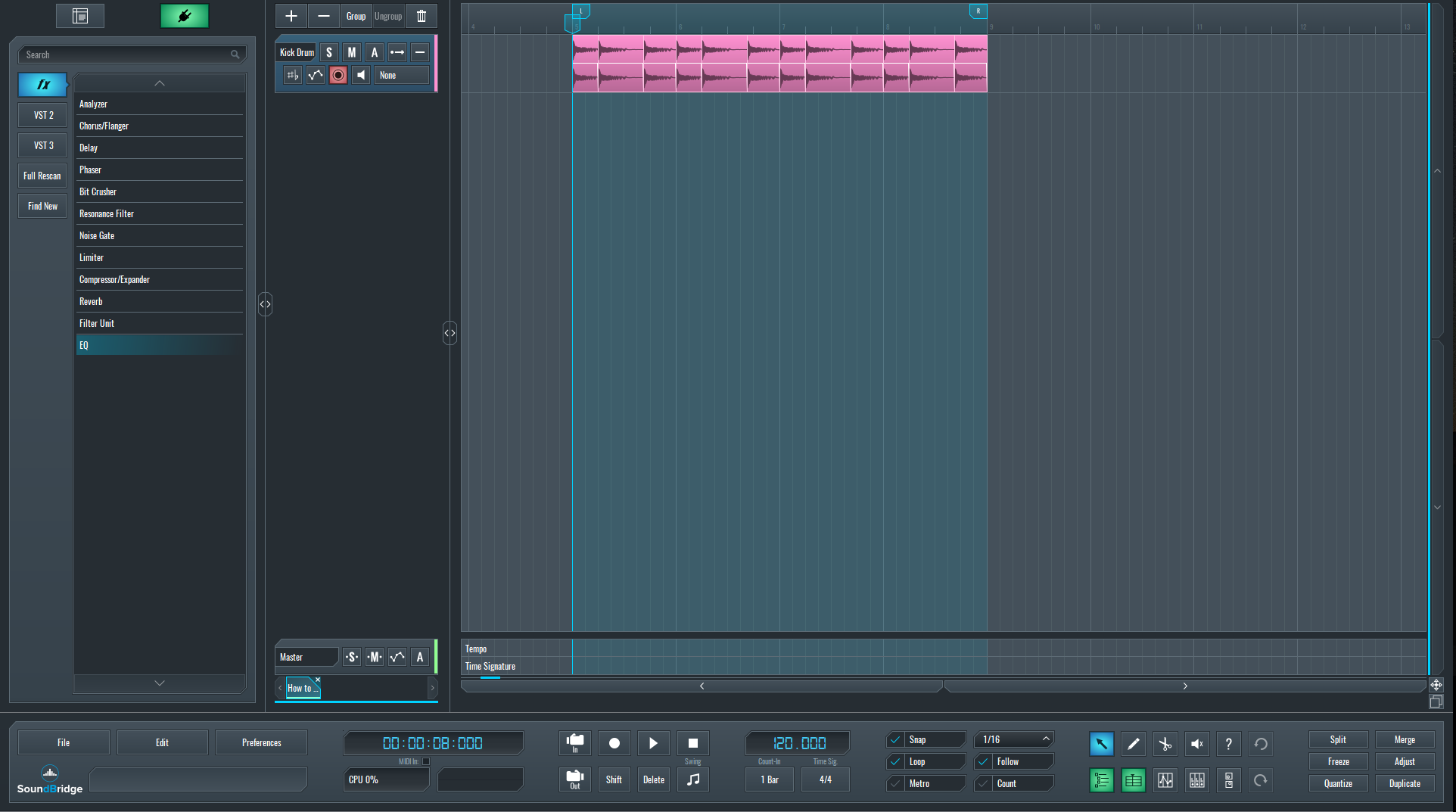 The next step would be to load an instance of an EQ on the kick drum channel. For the purpose of this tutorial, we have chosen to use a built-in EQ which can be found among other built-in effects within the SoundBridge: DAW. 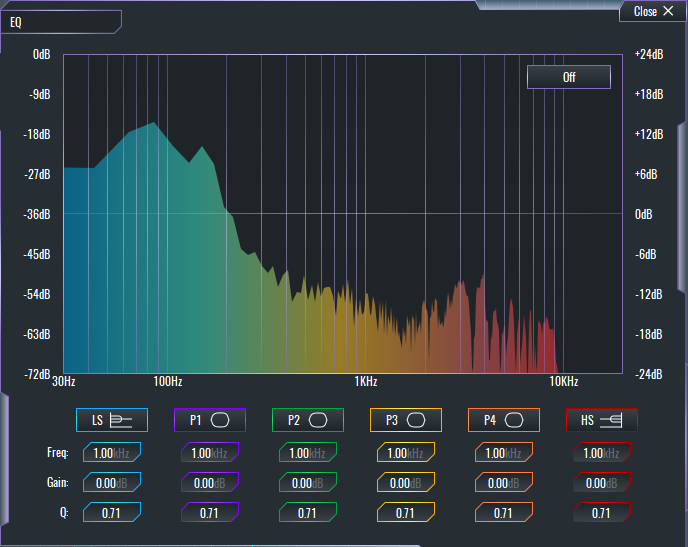 As you can see from the picture above, there is a spectrum analyzer embedded in this EQ. This will come quite handy for use in order to see which frequencies of the kick drum have the most energy. As we expected, there is a lot of energy in the low frequencies, some on the mid and some obvious amount of energy on the high frequencies as well.

Maybe you have heard about it before, but there are, so-called, “magic” frequencies for kick drum sounds which usually work pretty well for the majority of kick drum sounds. According to that, we should first get rid of “boxy” sound which manly appears between 200 Hz and 500 Hz. To do this we will enable the first band of the EQ and search for mentioned sound in that range of the frequency spectrum. Here is an audio example of how it sounds and you can see it in detail in the picture below. Have in mind that the dB value for this band of the EQ is extremely exaggerated, but this is necessary in order to find which frequency has that unwanted resonance. 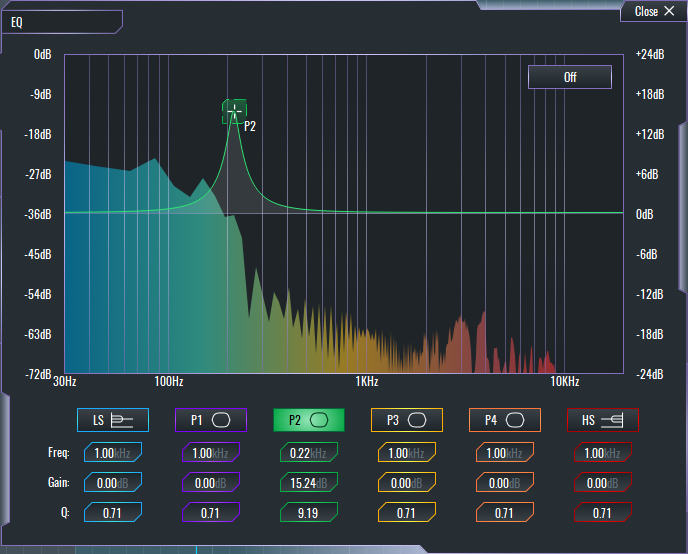 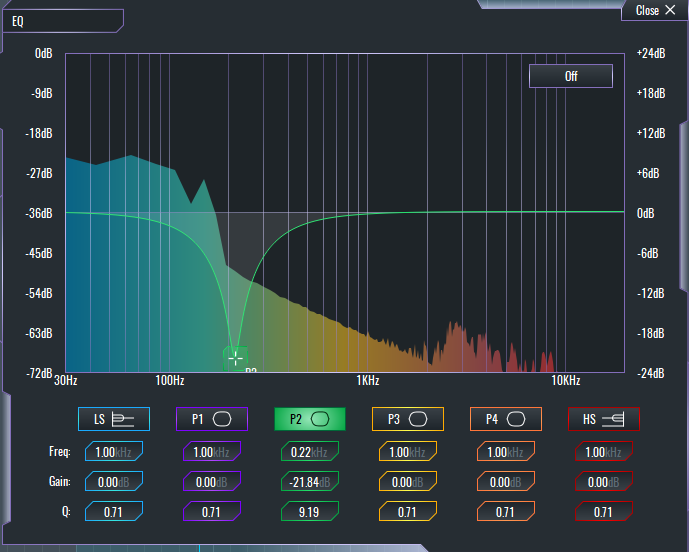 Moving forward, we have another magic spot that appears from 1 to 2 kHz and this is mainly where the attack of the kick drum is placed. Let’s repeat the same process as above and hear the unwanted frequency first boosted and then attenuated. 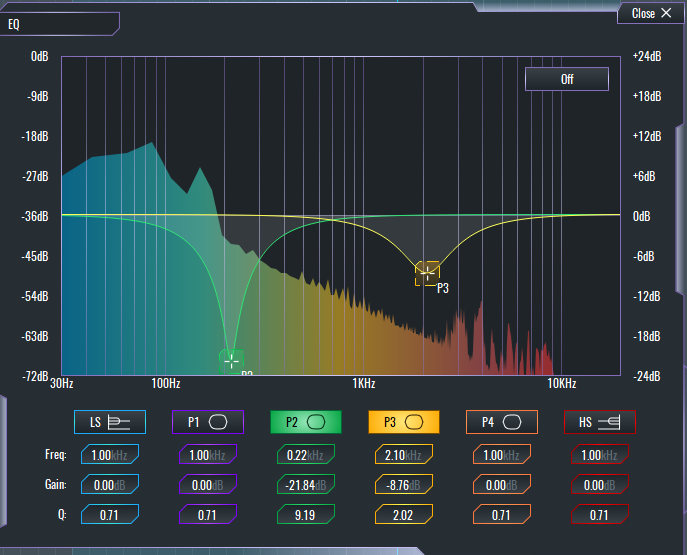 The 3rd unwanted frequency which we found in this kick drum sound is appearing around 3.7 kHz. It has a really resonant peak which we think needs to the tamed. Therefore we will apply the same process as used in the previous two bands and listen to the boosted and attenuated versions of the 3rd equalizer band. To finalize the processing with EQ, we will cut the sub frequencies of this kick drum. This is because it has too much energy in that area. To do that we will use a simple Low Shelf filter which can be found as the first band on this EQ. You can check that in the picture below. 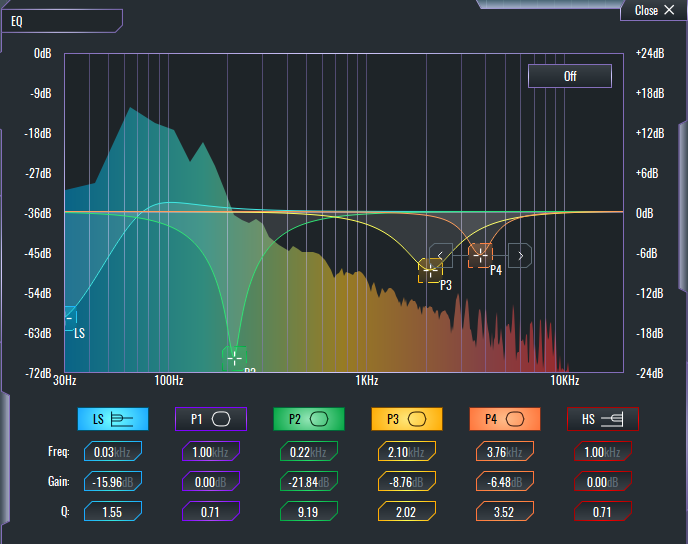 Since we got a bit far from the original/unprocessed sample it will be wise to hear the difference. It will also be good to mention that there is a tremendous amount of different sounding kick drums out there. So not every kick drum will have problematic resonance around 200 Hz or 3000 Hz. Therefore we encourage you to experiment and trust your own ears as well.