Today we have a large number of sound banks at our disposal. They became an inevitable part of music production starting from famous redesigned synthesizers like Moog and Oberheim, all the way to complex live string and drum ensembles. Consequently, the dedication with which these sound libraries are made is just stunning and they sound genuinely realistic. In the next tutorial, I will speak about one of these banks which is based on a completely different idea regarding layering and blending of the number of sound sources.

The Galaxy-X by Best Service is a stunning instrument. At its core, it is a convolution synthesizer creating exceptional sounds by using extraordinary sound design, FX convolution. Fx convolution basically refers to a very special interaction between two sounds creating a stunning new one. This convolution process which develops one of the kind sounds is quite complicated but Galaxy-X makes it easy and intuitive to handle. That’s is because the Galaxy-X for the first time unites all the elements of the convolution in one integrated system within one virtual instrument. In this tutorial, we will look at the Galaxy-X interface and explain how it works. So without further delay let’s start!

As Galaxy-X requires a base sampler to work, I will load a fresh instance of the Engine 2 into a new MIDI channel within Soundbridge. Engine 2 is a sampler instrument much like Kontakt player by Native Instruments which you will need to install separately.

Upon opening of the Engine 2 interface, we can see the “add layer” icon on the top right part of the interface. By clicking on it we have loaded new, empty, layer. Within the layer, if we click on empty blue space next to the on/off sign, we are switched to the browser which is showing the list of the sound banks. In this case, I will choose a preset from Galaxy-X FX bank. 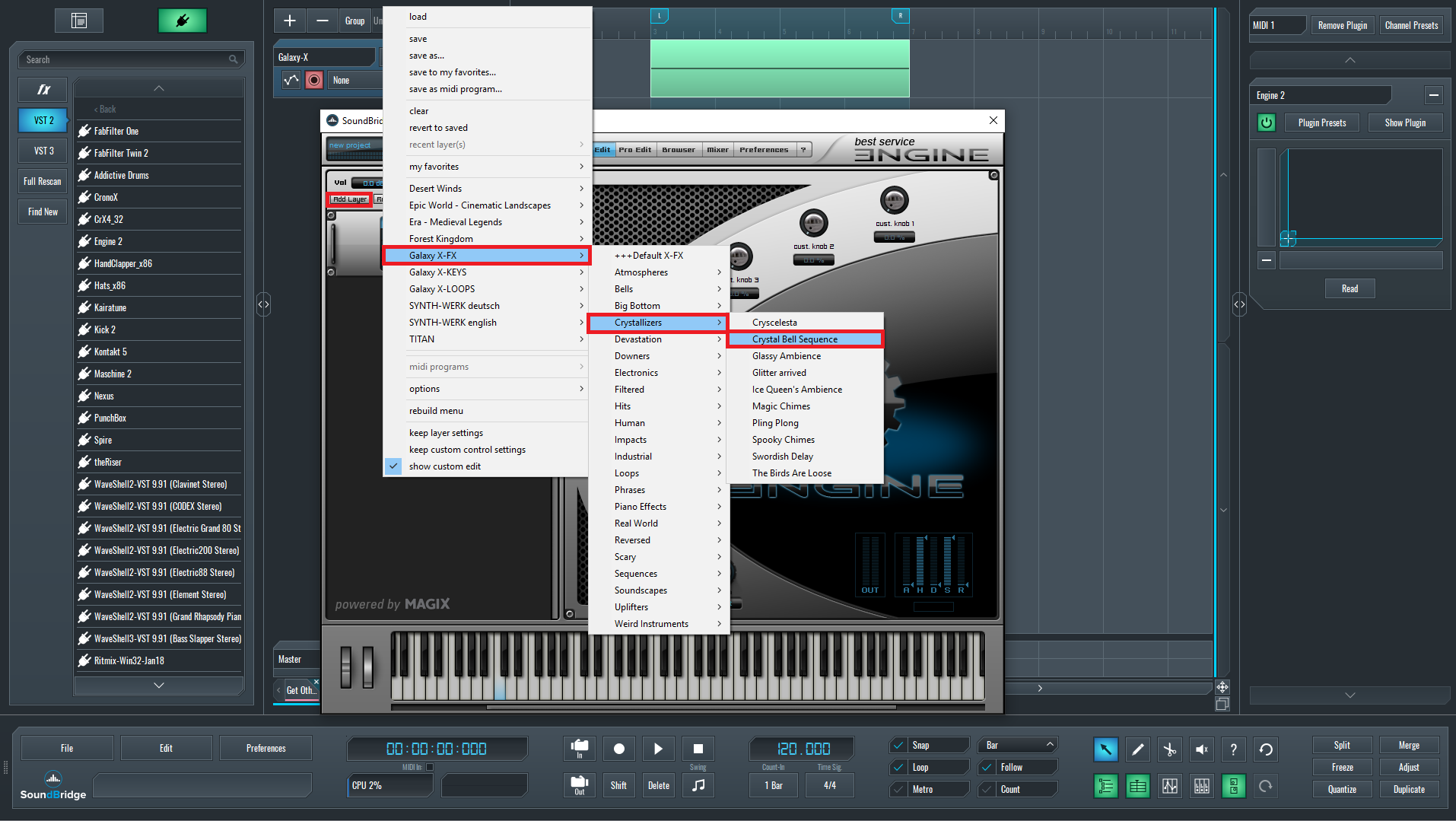 Once we are done with that, the user interface of Galaxy-X will appear under “Quick Edit” tab. Furthermore, the user interface is divided into 4 sections set around the centre. Their chronological order also describes the sounds way thru modules. It begins with the sources, followed by the pre-X engine, the X engine itself and finally the post X engine. 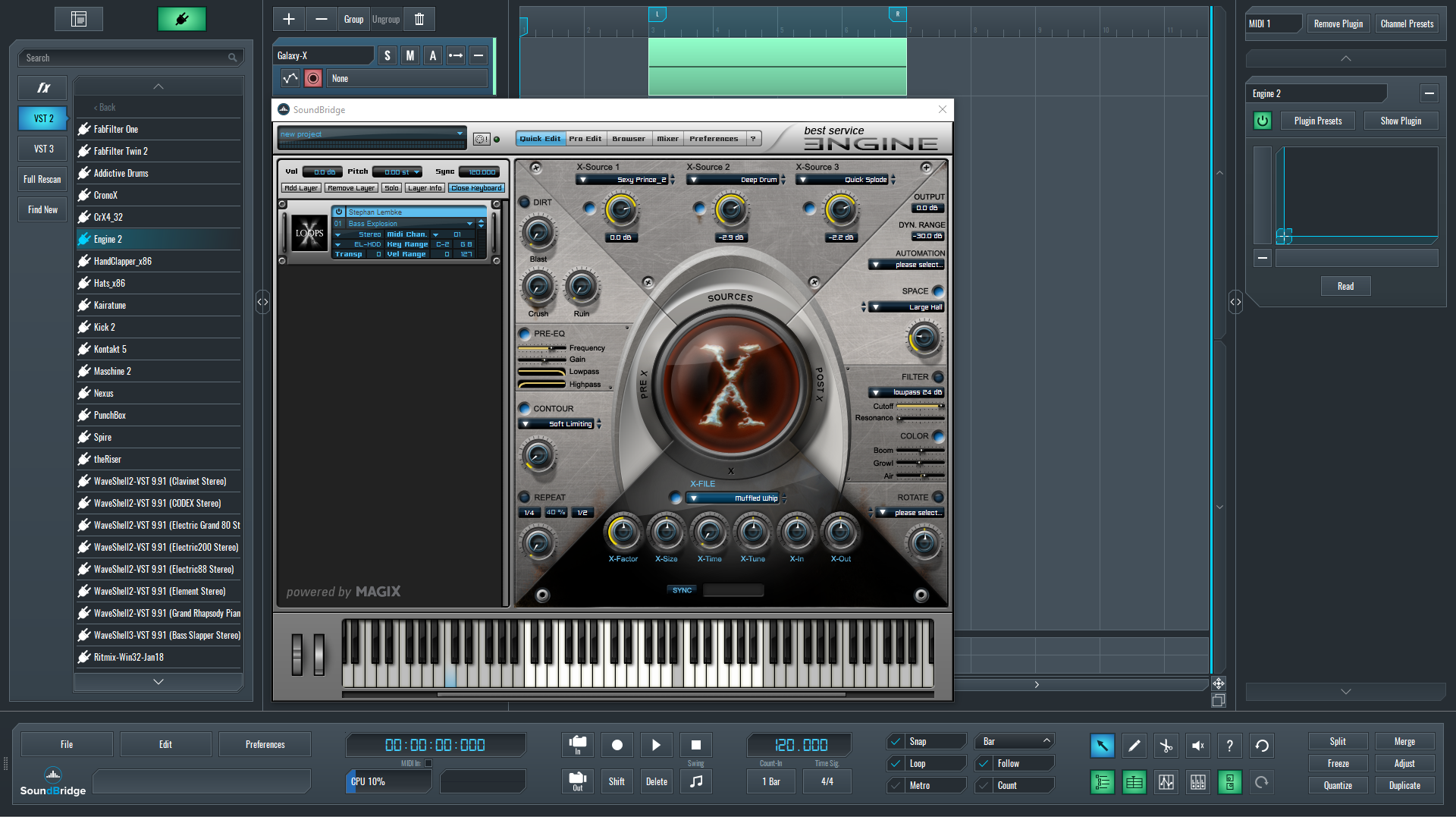 It all starts with the top triangle, which is a source module containing thousands of basic sample sets. So, depending on the layer category, these three layers can be a mix of effects, loops or tonal instruments. Keep in mind that convolution means a combination of the two sounds creating a third one. In addition to this, the next in line is the pre X engine which contains effects like dirt, bit crusher, and ruin. You can use them to make the sound distorted. Below that you can choose different arpeggios and groves and there is a repeat effect which is basically a well-designed delay effect.

After that, the already processed sound meets its counterpart in the convolution module of X, the X engine. Usually, the convolution sound files are called “impulse responses” referring to the way they are created. But as these convolution files in X are much more diverse, the creators choose to call them “ The X files “. You can find around 8000 of them in the drop-down menu just above the knobs. Now let’s hear how the Galaxy X sounds with different combinations of the “ X files “.

This was just the basic sound coming from module 1, which is made from 3 different sounds generating a drum loop. Now let’s move to the second module where I will engage some distortion and delay to spice the sound up.

Next, let’s engage the heart of the Galaxy-X, the X file and hear how it nicely blended some airy chord sound onto the drum loop.

In the end, we can engage the last module named Post X. This module features a couple of effects designed to finalize the sound. Rotate, for stereo effects, EQ and filter, space (which is a convolution reverb) and finally controls for dynamic range and output level.