Double-tracking, or just doubling, is a technique in which a second identical take of a performance is recorded on top of the first. The purpose is usually to produce a stronger or bigger sound than can be obtained with a single take. It’s a form of overdubbing. The distinction though, is we’re doubling a part, as opposed to recording a different part that interacts with the first. Vocal harmonies are and example of the latter. The effect of this technique can be further enhanced by panning one of the performances hard left and the other hard right.

The double-tracking effect is very beneficial for vocals or guitars, but it’s worth saying it can be used for a variety of other audio sources as well. In the next tutorial, we will show you how to apply it on a guitar riff to make it sound bigger.

As usual, we have prepared a short sequence in our SoundBridge: DAW. It contains all the essential elements of a full mix and includes a guitar riff. Let’s have a quick listen. 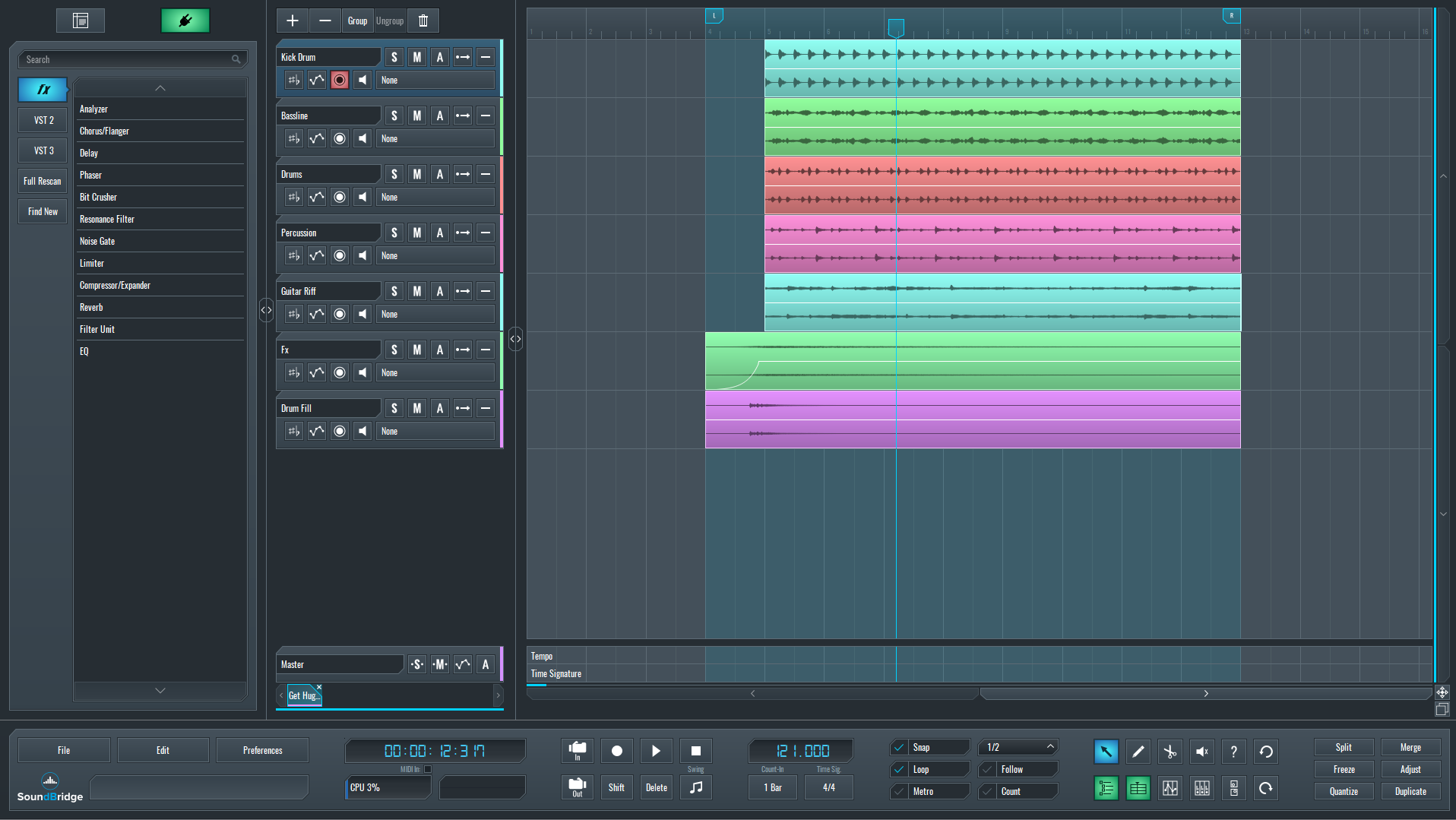 Our riff can sound wider and be more present in the full mix. To that end, we will use the double-tracking concept. We can’t ask the guitarist to perform another take for us at this time, so we’ll need to use audio effects for the task. Many exist which are suitable. In this tutorial, we have chosen the MDoubleTracker by Melda Productions. Let’s start by adding an instance of it on our guitar track. 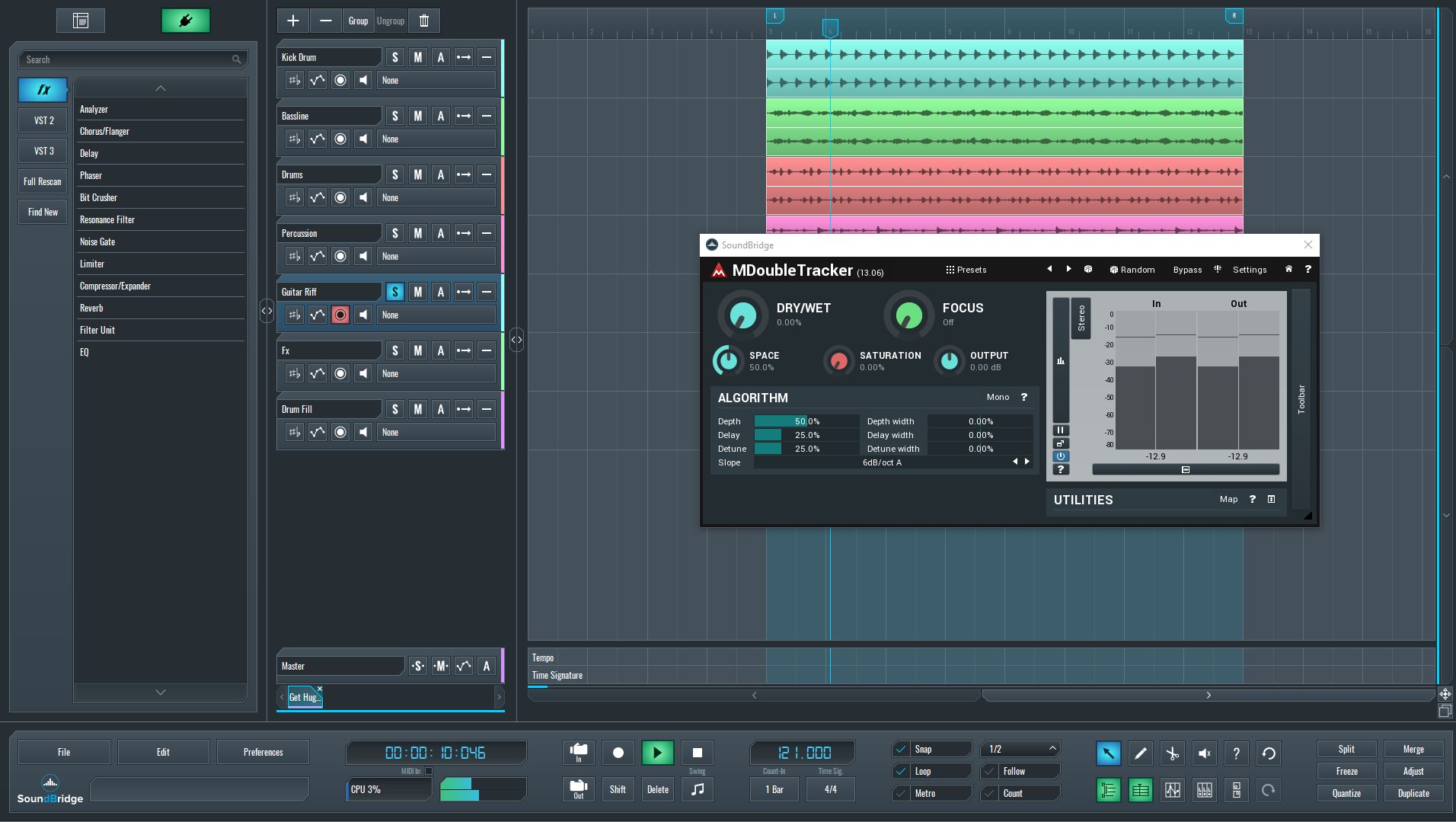 As we can see from the picture above, the interface of the plugin is very straightforward. On the top part there is a section with big DRY/WET and Focus knobs. DRY/WET, as you probably know, controls the balance between unprocessed and processed signals. The Focus defines the minimum frequency from which the stereo expansion will start to act. You can use this to avoid widening and phasing issues in the low part of the frequency spectrum.

Below we have Space, Saturation, and Output gain parameters. Space controls the overall delay sizes used by the algorithm. This results in the feeling of smaller or bigger spaces that the processed audio resides in. You can essentially control the stereo field with this parameter. Saturation defines the amount of saturation applied to the signal. This generates higher harmonics, which makes the signal richer and more exciting. Finally, Output gain defines the level processing applied to the output signal.

Now, we have the Algorithm section below. In this section, the first thing is the Mono switch, which is very useful to quickly adjust the parameters for maximum mono compatibility, if that’s relevant for your needs.

After this brief introduction of the MDoubleTracker and its control parameters, it’s time to move to some practical audio examples. 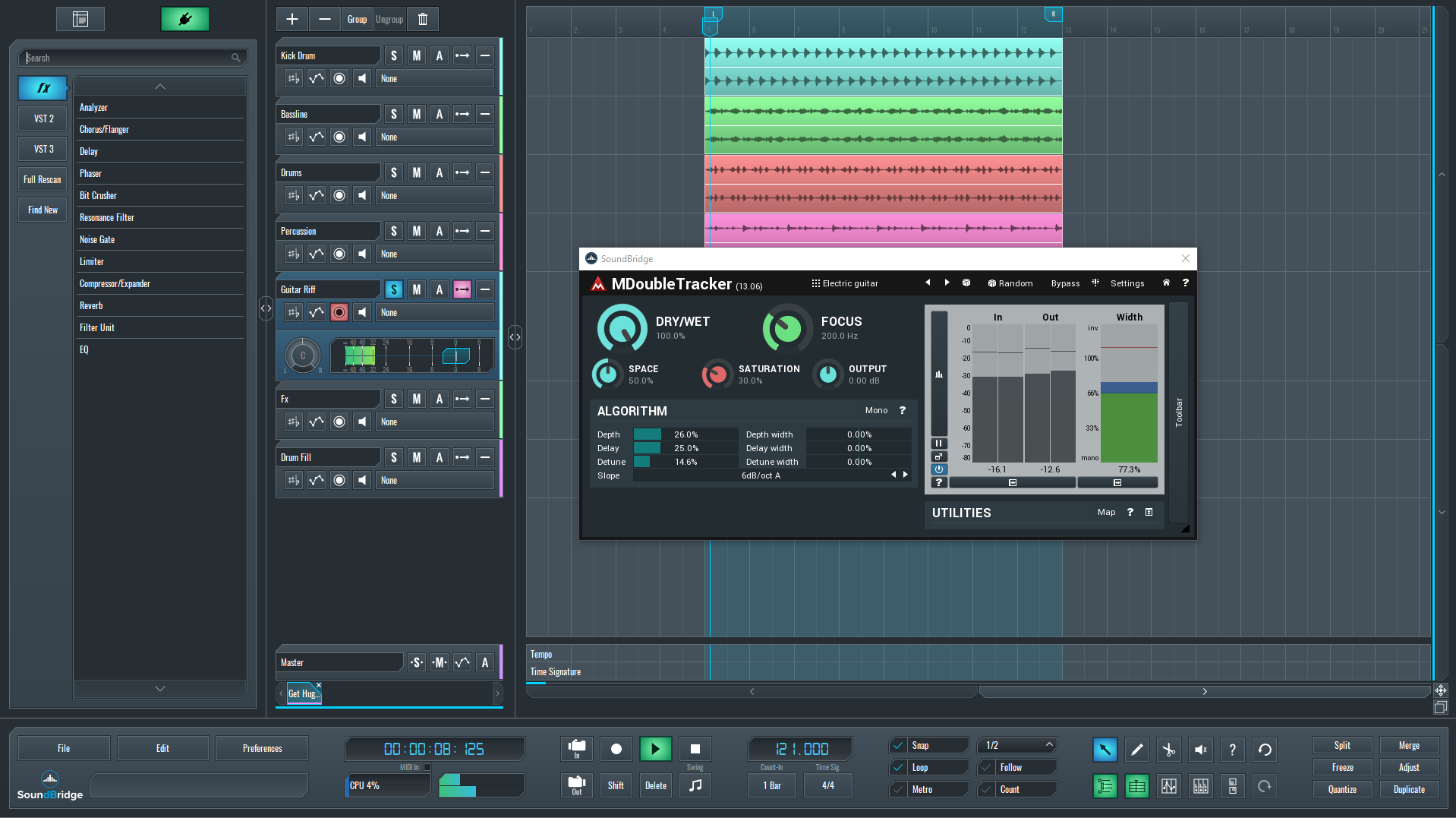 As you can see from the picture above we have set the DRY/WET parameter all the way to 100%. The Focus is set to 200 Hz. The Space parameter is at 50%. We have increased the Saturation amount to a light 30%, while the Output stayed at its default setting of 0 dB. On the algorithm section, the Depth is at around 26%, Delay at 25%, and Detune value at around 14%. Finally, the band separation, or Slope, is at 6dB per octave. Overall it’s a rather subtle processing of the original sound. We can compare before and after in the audio examples below.

Finally, let’s listen again to the guitar riff before and after processing in the context of the full mix.