In most mixes, the role of a synth pad is to fill in a certain space with harmonic content and noise. They are usually made up of several different sounds and take the spotlight during a bridge or breakdown section. There are countless preset patches for synths and samplers that might satisfy the role on their own, but their glamour may convince you to settle for something you weren’t actually looking for or something that doesn’t mesh with the track. And, they often contain too much spectral content – tones that rub against the grain of your harmony. Here I will show you my process for creating a custom pad that is both unique and sympathetic to the mix. You can download a sample HERE and re-sample it if you’d like. I used iZotope’s Ozone 6 to show the spectrum of each component.

1. Open a VST synthesizer capable of producing at least two basic waveforms at a time, FM8 is a good choice.

2. Enable two oscillators, make one a triangle wave and the other a sine wave.

3. Send all of both oscillators to a low-pass filter with a little bit of resonance. Set the cutoff to something like 150 Hz.

4. Detune one of the oscillators slightly.

6. Turn the polyphony to 1 or set the synth to mono mode.

8. Turn key sync or phase lock on for all the oscillators so that they start in the same phase each trigger.

9. Add a little gain with an amplifier effect, but keep the drive low.

1. Open a VST synth capable of producing up to 5 basic waveforms at a time.  I chose to use FM8 again.

2. Enable five oscillators: 2 triangle waves, two sine waves, and a sawtooth wave. Start with all of them an octave above the sub synth.

3. Transpose a couple of the oscillators. Think harmonic series. Try octaves, fifths, and thirds. If you want a darker sounding pad, use minor thirds – but be consistent, don’t use both major and minor thirds. Drop these tones down low in the mix of oscillators.

4. Turn on key sync or phase lock to ensure each oscillator starts at the same phase position on the trigger.

5. Pan the outputs across the image: hard-pan the triangles, half-pan the sines, and keep the sawtooth up the middle.

7. Add a little bit of feedback to a couple of the oscillators.

8. Add a little vibrato by turning up the vibrato control in FM8 or modulating the pitch of each oscillator with a shallow, moderate speed LFO.

9. Try inserting a phaser on the output to make the patch move around a bit.

10. Insert a resonant band-pass filter on the output at around 300 Hz followed by a high-pass filter cutoff around 150 Hz just to make sure the low frequencies are cut.

1. Open an instance of Massive or any VST synth with additive waveforms and LFOs.

2. Enable three oscillators. Make them some sort of complex wave, but nothing too exotic or digital sounding – I used additive waveforms and a polysaw.

4. Transpose one of them up a perfect fourth or fifth, your call.

5. Modulate about half of the amplitude of that transposed oscillator and one other oscillator with an LFO. The modulation should be barely noticeable, but indeed noticeable.

6. Modulate a small range (a semitone or two) of the non-transposed oscillators’ pitches with a different LFO.

7. Use an amplifier effect to drive the gain a bit.

8. Filter the output with a band-pass filter set to around 1 kHz.

9. Use a parametric EQ to highlight harmonics and cut undesirable content.

1. Open a VST synth capable of producing at least three basic waveforms at once. I used the operators in FM8 again: two hard-panned sawtooths and one sine up the middle.

2. Route them all to a high-pass filter. Set the cutoff to something like 2 kHz with some resonance.

3. Adjust the amplitude envelopes so that they match the subs.

4. Slightly detune one of the oscillators.

5. Turn on key sync or phase lock so that each oscillator starts at the same phase each trigger.

6. Drop a low-pass filter on the output with a non-resonant cutoff at around 8 kHz. This is to smooth out the natural harshness of this range.

7. Try using some modulation effects like talk-wah, tremolo, or vibrato.

1. Open Massive or any VST synth with a noise oscillator.

2. Disable all the oscillators and enable the noise oscillator. Full amp and full color.

3. In the amplitude envelope (4ENV), adjust the settings to match the previous envelopes.

4. Activate Filter 1 and make it a bandpass filter.

5. Bring the cutoff to about max, the bandwidth to about 9 o’clock, and the resonance to about 3 o’clock.

7. Use an LFO to modulate about half the range of the pan dial slowly and smoothly.

6. Add some phasing and a lot of reverb.

7. Drop a high-pass filter on the output with a cutoff around 10 kHz. Keep the resonance low. 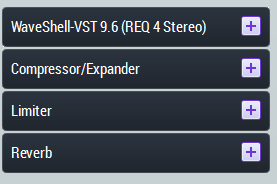