The World of Scales, Intervals, The Circle of Fifths, and Diatonic Chords

Firstly, the majority of popular music is diatonic. This means it was composed within a major or minor key signature and does not modulate. Furthermore, a key signature determines the set of pitches that “agree” with each other harmonically. There are usually 7 different pitches in a key signature and they are generated by a certain formula.

As a matter of fact, the formulas are easy. Simply choose a note to call 1 (“do”), choose major or minor, and follow the respected pattern of half-steps and whole-steps to find the next 6 diatonic pitches.

Mnemonic Device:      “What would Harry wear when weighing himself?”

Mnemonic device:      “We had waited while Harry was walking.”

*There are several types (modes) of minor that follow different interval formulas. Furthermore, I chose to explain natural minor in this introduction because it is the simplest mode of minor. Notice its formula is the same as major except it starts on the 6th step.

An interval is a distance between notes. It can be measured in half-steps or by scale degree (1 through 7) and is often given a name based on the quality of the sound. All things considered, the most basic interval is called an octave. It describes a doubling in frequency and is the first interval in the Harmonic Series. Here are some other intervals….

The Circle of Fifths

If you were to generate the scale for each major and natural minor key signature (24 scales total), you would notice that each scale is distinguished by the number of “flats” or “sharps” it contains. This diagram from Frank Jargstorff’s blog is called The Circle of Fifths. Consequently, it shows that keys separated by 5ths are differentiated by one “flat” or “sharp” in the signature. Additionally, it is a persuasive tool when planning to modulate the tonal centre. 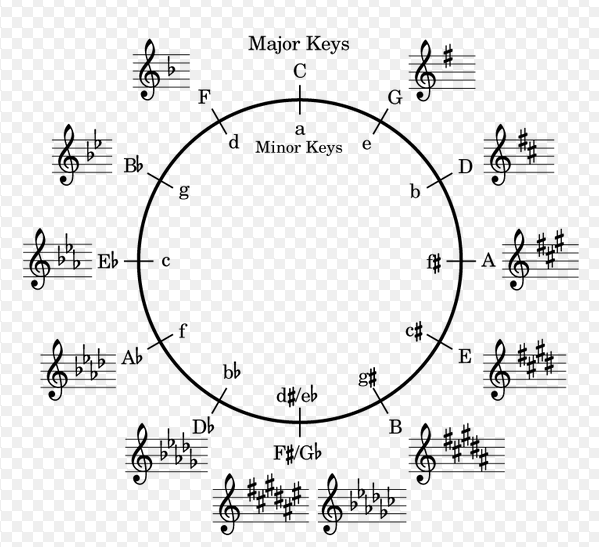 **The “Enharmonic Spelling” of a note or interval is like a pseudonym for it. It describes the exact same sound in a different context. However, only one spelling is correct based on the context. The rule of thumb is to use “sharps” when there are sharps in the key and “flats” when there are flats in the key, with the exception of ascending/descending accidentals and advanced chord alterations. For example….

– F♯ and G♭ sound the same and look the same on an instrument. Each has its correct usage depending on the key signature. You should never call F♯ “G♭” in the key of G, D, A, E or B major because F♯ exists in those keys.

– You should never call G♭ “F♯” in the key of Gb or Db because G♭ exists in those keys.

– An augmented 4th sounds the same as a diminished 5th but they cannot exist in the same system. Either can be the correct name depending on the context.

A chord is a simultaneous performance of two or more notes. On the other hand, a diatonic chord is simply a chord whose components exist within the key signature. A triad is a chord consisting of 3 notes, separated by thirds. The function (major, minor, diminished, augmented, etc…) is determined by the quality of interval between the notes in the triads.