The art of audio mixing is dynamic in nature. As technology develops and musical trends come and go, new mixing techniques are introduced and developed. Stereo imaging has been an important topic since the early 1970s, when nearly the entirety of monophonic master recordings converted to Stereo. Today’s electronic music masters may not be so rich in dynamics. However, they utilize stereo width extensively. Let’s have a look at some ways to create a healthy stereo image in our mixes.

Despite the topic’s subjective nature, there are some general guidelines that we can use when thinking about the stereo image.

When talking about stereo width, we also have to consider the placement of a sound in space. In this case, placement refers to the “pan” position of a particular channel.  For example, prominent elements such as the kick, the sub-bass, the snare, and vocals, should be in dead center. This helps to create a focal point, an anchor that supports the rest of the mix. The background vocals should be around 10 o’clock and 2 o’clock; this helps prevent them from interfering with the main vocal. Anything else, including guitars, synths, and overheads, need to have far from the center positioning – at least to 9 o’clock and 3 o’clock;

Knowing where sounds should be placed is of no real use unless we know how to place them and adjust their stereo image.

Pseudo-stereo helps us widen a mono track. We can do this by duplicating the mono track and delaying the clip on one of the tracks by a few milliseconds (long enough to get out of the “phasing” range). Then, pan the two mono channels left and right respectively to give the impression of width without phase issues.

This is a mono audio clip:

This is the same clip widened using pseudo-stereo:

This technique differs from the previous in that it is applied to a signal that is already stereo. Equilibre is a freeware plugin that enables us to use it. The “mid-side” filter mode enables us to EQ specific areas of the stereo field. “Mid” passes content in the signal that is identical in both the left and right channels (mono), and “side” passes content that differs between channels. By decreasing the “mid” frequencies and boosting the “side” frequencies, we create this impression of width.

Here is a mono guitar riff:

Here is this same riff after using mid/side processing in order to widen it.

I exaggerated the effect within Equilibre for demonstration: this is how I set my EQ. 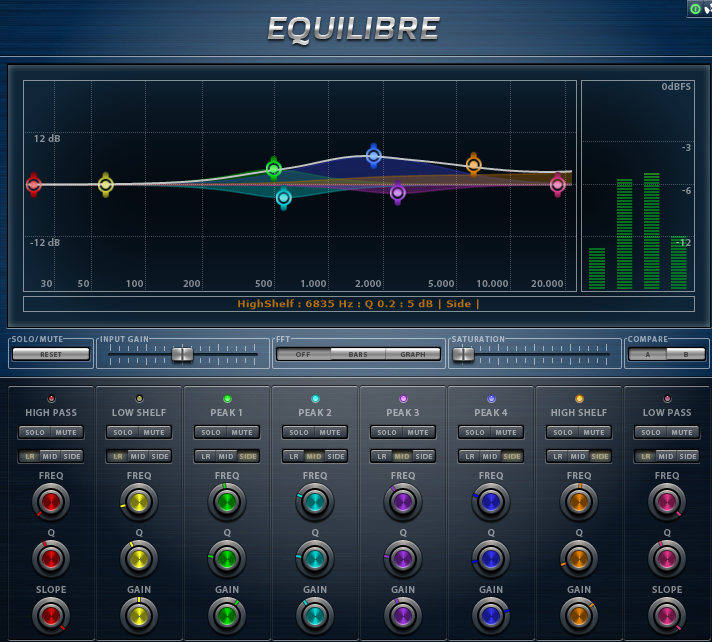 Although reverb is not universally considered to be a widening technique, it is often used to widen a monophonic main vocal track that is placed in the center of the mix. By sending the track out to a return bus that has reverb on it, the reflections emulate a space and thereby give the sound a certain depth and width (See Blog: Powerful Parallel Processing). This is just one of many applications of this technique.

If we take that mono guitar riff from the previous example and add reverb to it on a return bus, this is the result:

Some synths offer ways of increasing stereo width using native features. They do this by allowing multiple voices to be spread out across the stereo field. It is important to add some detune between the voices to prevent phase interference. If the voices are similar, they will phase in and out in unpredictable ways. This causes imbalances across the stereo field and may make the sound seem to move right and left (see blog: Phase and Phasing).

This is the default patch in Massive with one mono voice:

This is the same patch, but with a second voice, the voices panned and detuned.

Here is how the Massive voicing tab looks when the voices are spread:

Although this technique involves the placement of sounds in the stereo field more than their width, by doubling tracks, it increases width. This differs from pseudo-stereo because in that it uses two different recordings. For example, we could record the same guitar part twice and pan the consecutive channels right and left, respectively. Since the two parts are recorded in different instances, they won’t phase. Yet, since they are both the same riff, it will seem like one, very wide, guitar part. This can help move the guitar out of the way of vocals and other prominent elements in the center of the stereo image.

If we record a second take of the initial guitar riff above and pan each take right and left respectively, we get this:

Now you have the tools to start experimenting with stereo width. Remember, there are a lot of products out there that can help you improve your stereo image, but just as many that can blur and damage it. In the end, any sound engineer will tell you that constructing a healthy stereo image is key to getting a tight overall mix.