A Hemiola is a rhythmic arrangement where one voice imposes a meter (time signature) over a voice that is playing in a different meter by accenting certain notes. There are many popular adaptations and arrangements of Hemiola that vary in complexity. They are evident in most electronic, dance, and club mixes and are often programmed to happen automatically when a note is pressed using delay lines and synced modulation rates. The traditional Hemiola is 2 over 3. Here is what it sounds like…

But this Hemiola is just the tip of the iceberg….

Below, I will walk you through a more modern type of Hemiola you may have heard the last time you were in the club. It takes some math and brain-busting to explain; but, once you sense the direction it is going, you will feel the groove and it will make perfect sense. It is created by imposing eight dotted 8th notes over a basic, non-syncopated beat in 4/4.

Here is the neat part – you can actually hear three different meters in this groove because of the way the math works. Every six quarter notes, the dotted 8th notes pattern will sync-up with the beat, creating ANOTHER imposed meter. Let’s break it down… 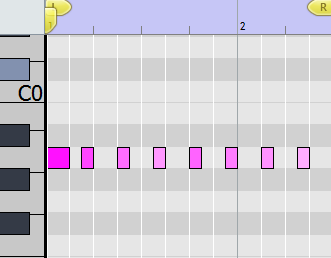 So… here is how they line up.

The beauty of Hemiola is that, unlike in mixed and polymeter, you’re not REALLY changing time signature – so, there is no need to adapt the meter in Lumit when they occur. You’re just accenting certain notes in a pattern such that it sounds like they’re synced to a different pulse. All that matters is feeling that “master” quarter note and knowing when the parts will synchronize (cadence together).

This is perhaps the coolest thing about using hemiola. Once you have the impositions sequenced in their skeletal form, you can subdivide or augment them in a lot of different ways. And, as long as the original accents are there, IT WILL STILL WORK. Check out my example with some subdivisions and accompaniment edited in…

I hope this clarified and de-mystified some of the neat things you’ve been admiring in EDM and other genres of electronic music. I will leave you with one of my favorite types of Hemiola. It is a more experimental type found in a lot of metal and electronica – ⅞ over 4/4, synchronizing every 7 quarter notes. See if you can figure out how to sequence it!