Here we are, walking through another hip-hop production process. This time, we are diving into a more synthetic, darker type of hip-hop, hip step. This is an increasingly popular style that features many cliche techniques such as fast hi-hats and wobbly basses.

Bring the tempo up to 140 BPM. This style of hip-hop is in the same range as dance and club music.

Create an instance of Battery or any other MPC style sampler with editing features. Take a look through the factory library and preset kits for 808 and 606 kicks and toms. Pick three of each and load them into individual cells in the sampler. You will not have to treat these samples just yet. Simply tune them to resonate in the key of your song and pan the toms out a bit to widen the image. If you have not decided what key you want your song to be in, try letting the tone of the default samples determine it.

Look through a sample library of your choice again for another kick. This one will serve as the punch and organic character, so find one that highlights the upper range. A little bit of noise is good – but avoid samples with digital effects or distortion in them. When you’ve found one you like, drop a copy of it below each 808 and assign the MIDI note from those to trigger the new sample as well. Highpass filters the new samples so that they do not interfere with the 808 kicks. Consider modifying the amplitude envelope of the 808s so that they attack just after the transient of the new punchy kicks. This will help create a smoother, more believable, layered sound. Your sampler should look something like this now…

Compose an 8 bar phrase made up of 2 similar 4 bar phrases. Try to think of a simple motif, like 2 dotted eighth notes, or a quarter note followed by two eighth notes. Then, duplicate the phrase to 16 bars and make a couple subtle variations on the duplicate.

Use a compressor you like in parallel on this track. You could either create a return with a compressor on it and bring up the respective send fader on the track or drop a compressor with dry/wet functionality directly onto the rack, in serial. Adjust the balance until you achieve a balance that is loud and clear. This is what my processed 808 kit sounds like…

Create another instance of a sampler to trigger a clap/snare layer to go on beat 3 of every measure. I chose to use a sampler called Polyplex in Reaktor. This sampler is built for layering one-shots and group processing, but it also allows you to edit and process them separately. My snare is made up of three Polyplex samples – a snare, a clap, and some metallic noise. Most samples from Polyplex are pretty compressed and affected, to begin with. Consider bypassing their processing while trying to design the sound you want. Then, add FX. You will want to use a bit of reverb on this sound since it only hits once per measure. I would recommend a decay time of around 1 second and about a 10% wet mix.

Create another instance of an MPC style sampler like Battery. Browse a sample library for two tightly closed high hats and one open one. Load them into empty sampler cells and make a copy of the open hi-hat. You should have 4 samples in total. Pan each closed hi-hat hard left and right and assign them to the same MIDI note so that they trigger together. This will simulate a “true stereo” sort of sound. Do the same thing for the open hi-hats (except assign them to their own MIDI note).

Compose a subdivided, articulate rhythm with these. Try starting with straight 16th notes and editing from there. Throw in some 32nd notes, triplets, and rests. Adjust the length of the open hi-hat samples so that they sound like they are closing just as the closed hi-hats hit. Drop an equalizer on the signal chain and cut the low end at around 250 Hz just to be safe. Consider dropping a bell around 2 kHz too if they sound too harsh. Then, add a little bit of reverb – mostly dry signal and decay of about 500 ms – just enough to put them “in the room”.

This is what my hi-hats sound like in my current project state.

Add an instance of a synthesizer of your choice that features a single sine oscillator. I chose to use Massive. Adjust the amplitude envelope attack and release so that there are no pops or clicks when notes are retriggered. Consider making the synth monophonic all-together.

Now, compose an 8 bar phrase and duplicate it to 16 bars. Do not make it too busy. Leave rests and space for the sounds to decay. Once you’ve created a 16 bar block, cut it up into 8-10 small motifs. These are the building blocks of the dubstep style basses. Duplicate the block and divide the smaller motifs in that duplicate among 4 new bass synths. This technique is called hocketing (See Blog: Hocketing and Pointillism).

At this point, you should have a 16 bar bass line divided between 4 new tracks that will be mixed with the sub. Your task now is to design dubstep style synths for each “hocket”. I chose to use 3 instances of Massive and 1 instant of FM8. 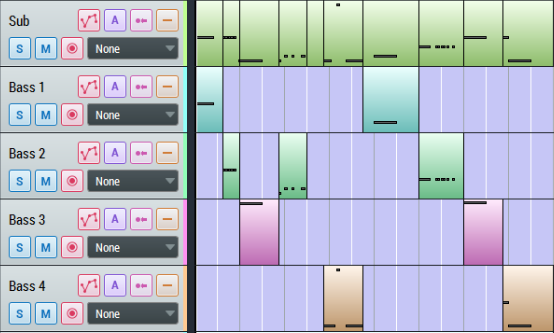 My first “hocket” is occupied by a wobbly bass patch. There is an envelope sweeping the wt-position of two hybrid oscillators and an LFO modulating the intensity of both oscillators as well as the lowpass filter cutoff at a rate that syncs to triplets in my song. I also added some insert FX – chorus and dimension expander.

The second “hocket” is a fairly simple design. I swept the pitch of a sin-square and an m-plex oscillator up with an envelope. Make sure zero trigger reset is enabled so that the envelope is generated every time a new note is pressed – otherwise, the pitch will continue to go up as you play until the envelope ends. I swept the amplitude of the first oscillator up with the same envelope. Lastly, I added a couple insert FX – dimension expansion and reverb.

My third “hocket” is an FM synth. It uses all sine waves. The carrier is being modulated by an operator pretty deeply and that depth is being modulated by another operator. The modulators are enveloped such that the added spectral content sweeps in as the note is held. I used ratios with thirds in them like 1.33 and 2.33 to create a more clangorous character. I also use some effects on this synth – reverb and chorus/delay.

My fourth and final “hocket” is a modified preset from Massive called Acid Raw. There is nothing wrong with using a preset every now and then. Sometimes, they are exactly what you’re looking for and are always a great resource for learning sound design and synthesis.

This is perhaps the most fun you’ll have during this production. Now that all the detailed sounds are set in place, you can relax and improvise with some chordal sounds. I chose to use a piano called The Maverick in Kontakt. I turned the dynamic range down and the articulation up (a little harder) because this piano is not meant to be focussed on. It serves more like a solid backbeat to glue the other instruments together. Try using a quarter note delay on it to fill in some of the gaps between stabs. I would suggest a good deal of reverb hear as well.

The only master processing I did was gentle limiting – just to prevent peak clipping. And, some side-chain compression on the sub-bass keyed by the 808s track (See Blog: Control Compression).

Now, here is the full groove in context!