How to Use Inversions and Voicings to Make Interesting Chord Progressions

Chord inversions and voicings are concepts you might be familiar with if you’ve become acquainted with music theory. They’re essential and very useful to understand when it comes to music production and composition. We will show you a brief introduction to the topic in this tutorial, and an example of how it can add interest and variety to your chord progressions.

In our SoundBridge: DAW, we have created a simple drum beat. Let’s listen to it. 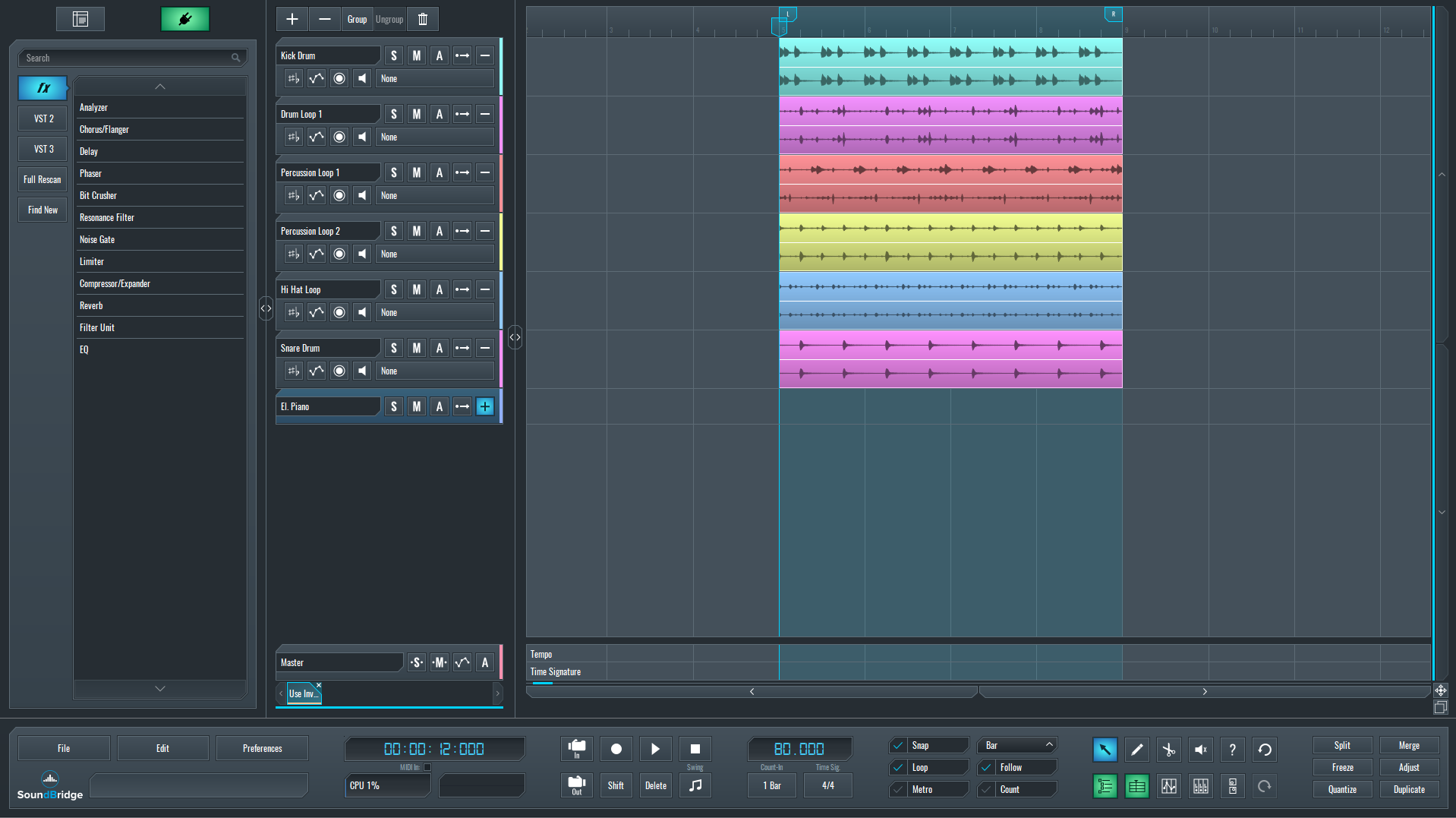 On top of this beat, we will add a chord progression using a piano sound. The chords will be F major, A minor, D minor, and E minor. The progression repeats twice. 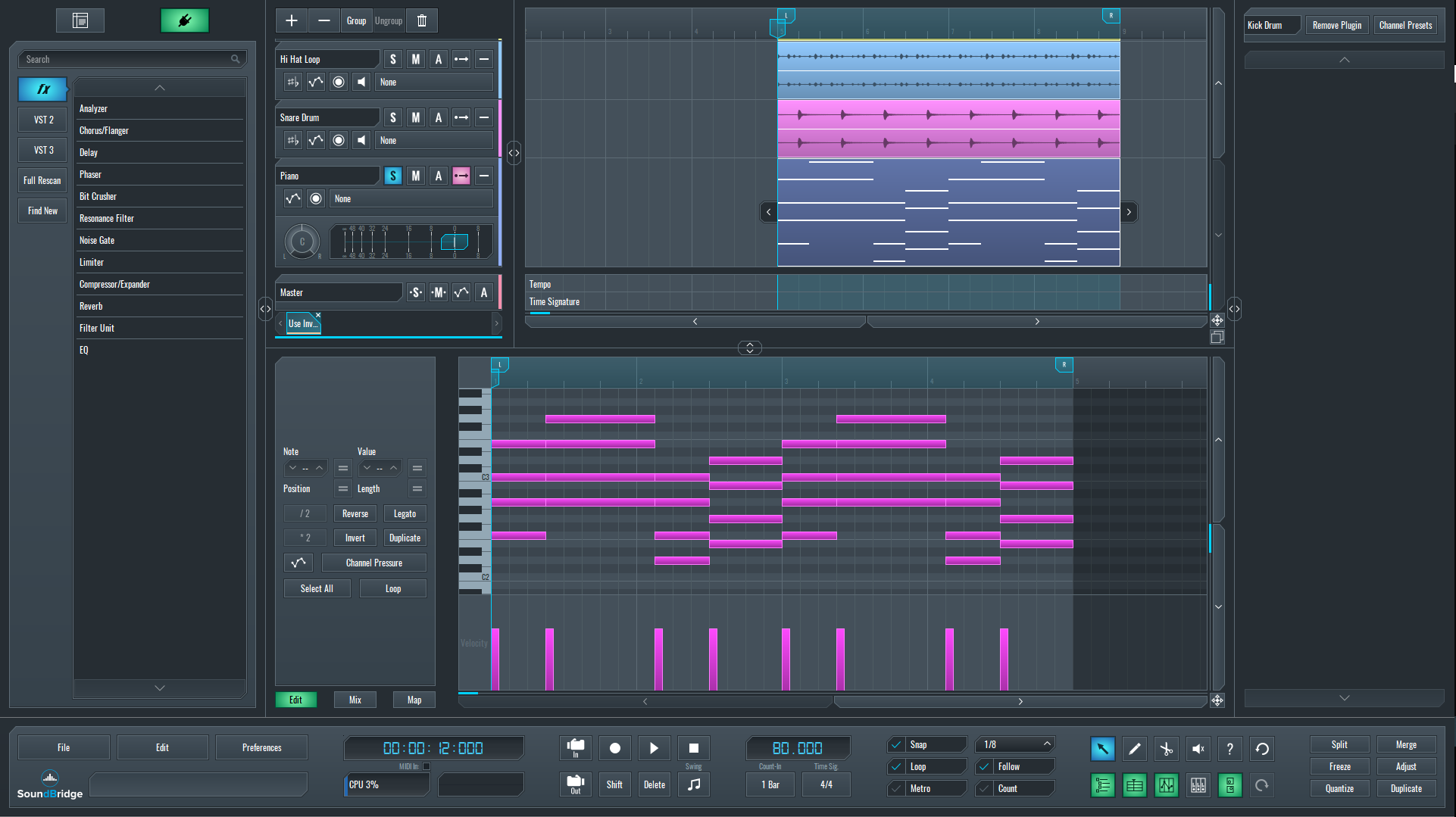 We can make this chord progression sound different without actually changing the original chords and their function if we understand the concepts of chord inversions and voicings.

In its essence, the inversion of a chord is simply a different order in which the notes appear from lower to upper voices. So, for instance, an F major triad on its original form has notes F, A, C, in that order, going up the range. One inversion happens when we move the lower F up an octave. That will result in chord A, C, F. This is the same F chord but now it’s “inverted”. Likewise, lowering the C note from the original position would result in the chord C, F, A, which is the second inversion of the F major chord. As chords get more complex or have more notes, even more inversions are possible.

There are many benefits of using chord inversions. For instance, a pianist would use them to facilitate a fluid movement of the hands while playing, to position different notes on the top voice of the chord which will naturally emphasize them, and to allow for better voice leading. The latter means that notes move and resolve in a stepwise motion between chords, without major jumps in the register. Often, this will sound more fluid and easy to follow. The benefits also apply for music production, regardless of the actual necessity to play the chord progressions live.

Now, when we talk about voicings, we’re also talking about the structure and order in which the notes are played. This includes inversions, but an alternate voicing is not necessarily a chord inversion. For instance, an alternative voicing happens if we don’t change the lowest note, which is what happens in a chord inversion, but we do alter the chord’s structure by lowering or raising other notes by an octave. As with chord inversions, this also results in different colors, weights, and directions to the chords.

Inversions and voicings to add interest

So to begin, we would like to add weight to the first chord, F major. We will lower its original F bass note by an octave. In order to do that, let’s select the note. You can see in the picture below that now it’s highlighted in blue. 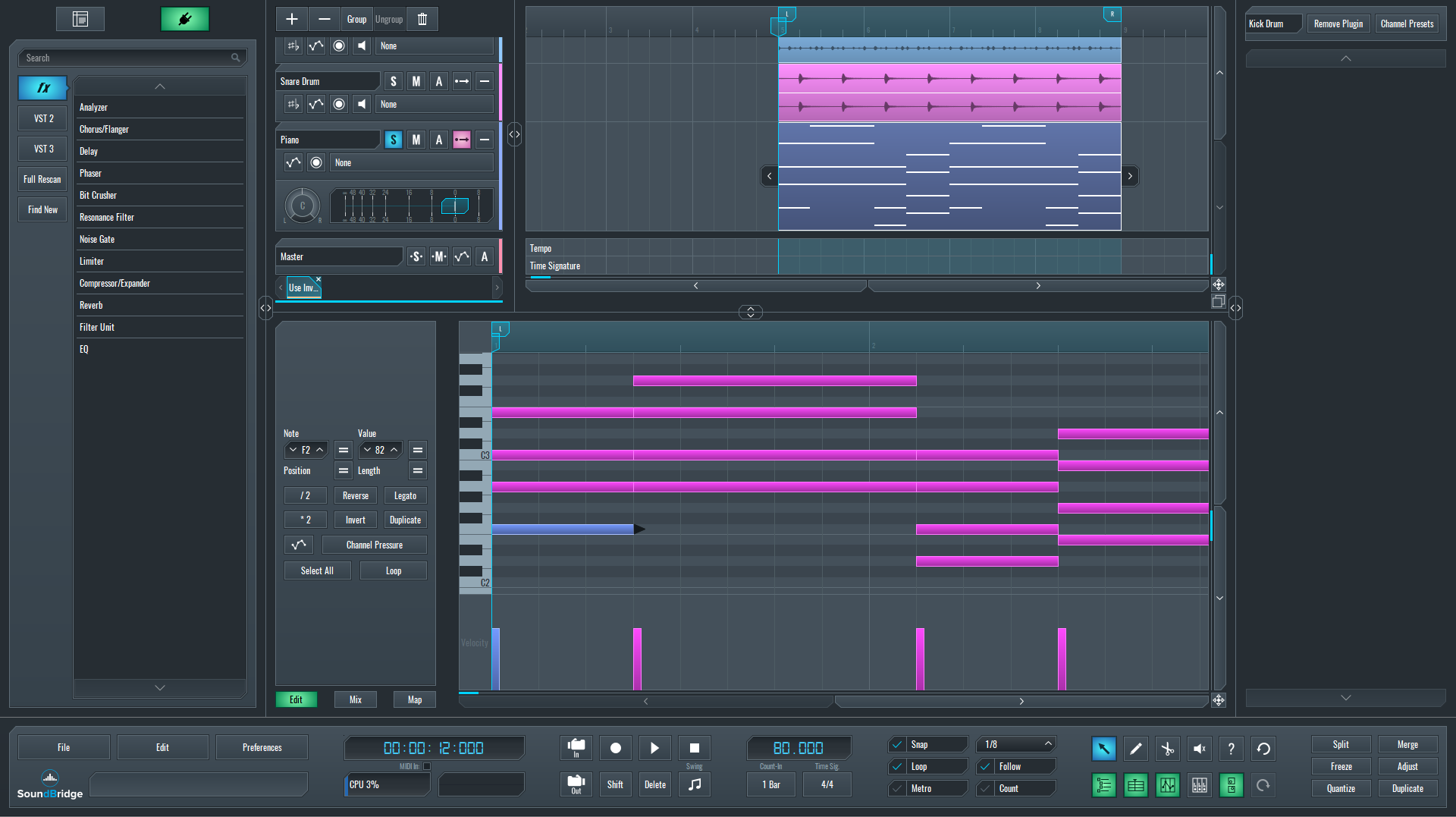 On the left side of the MIDI editor we have a panel with a set of tabs. Once you select the desired note, the textbox in the top left will show you which note is it and in what octave it sits. In our case it’s F2. By clicking on the little arrows on the left and right side of the textbox we can shift the note up or down an octave. Let’s lower it down once and hear how the chord sounds. 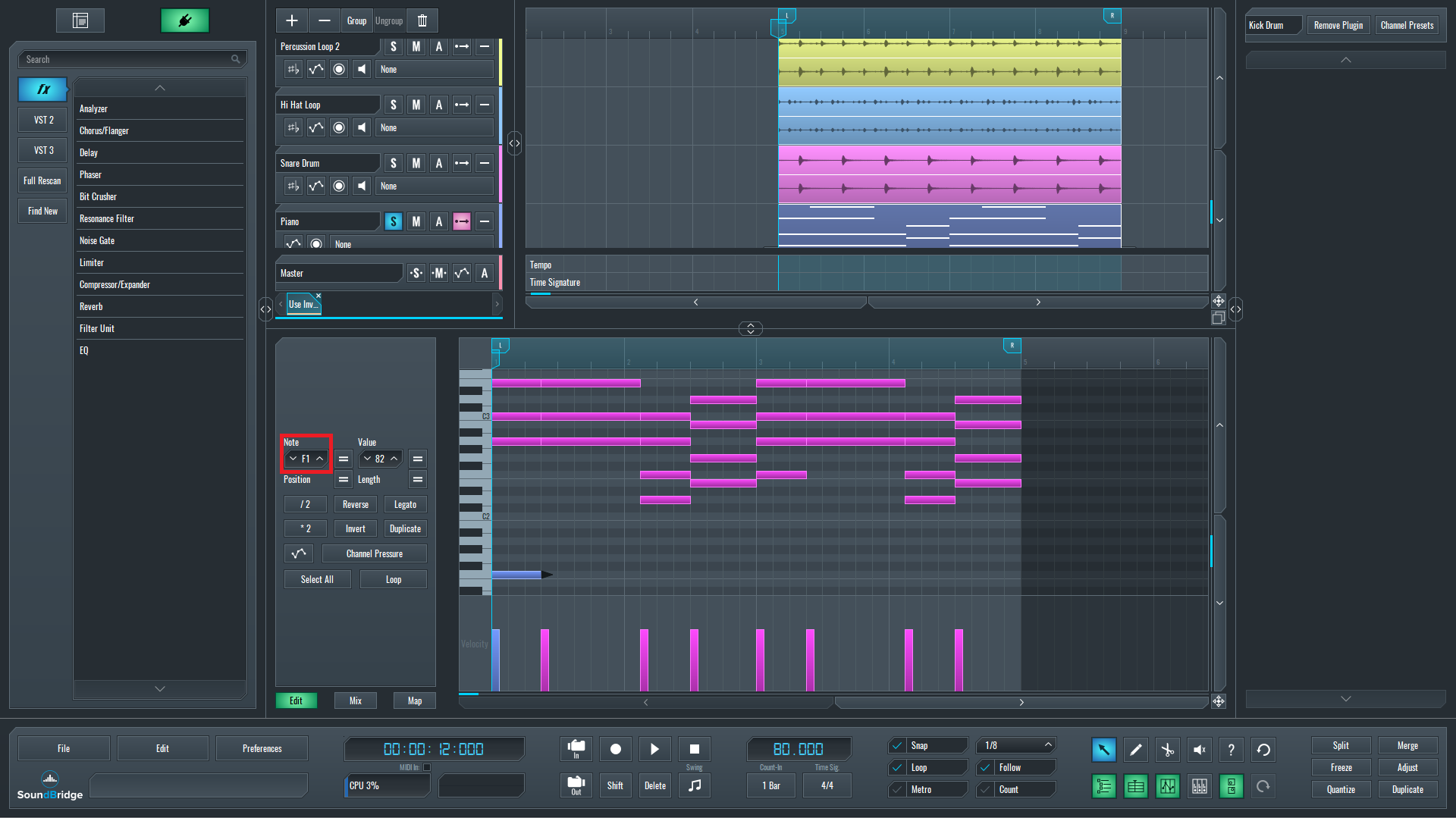 We can hear the difference now that our bass F note has been lowered down an octave. This gives the chord more weight.

Now, for the next chord, A minor, we will move the C note up an octave, which makes that the highest note. The new higher note makes for a different voicing of the chord and a different sense of movement. Additionally, we will shift the note E down an octave for a different bass movement. This could now be called an inversion of the A minor chord.

After that, for the D minor chord, we will raise the A note up an octave. Here, we will keep the same lower note as before. In the picture below, you will see the modified notes highlighted in blue. The rest of the progression we will leave as is. 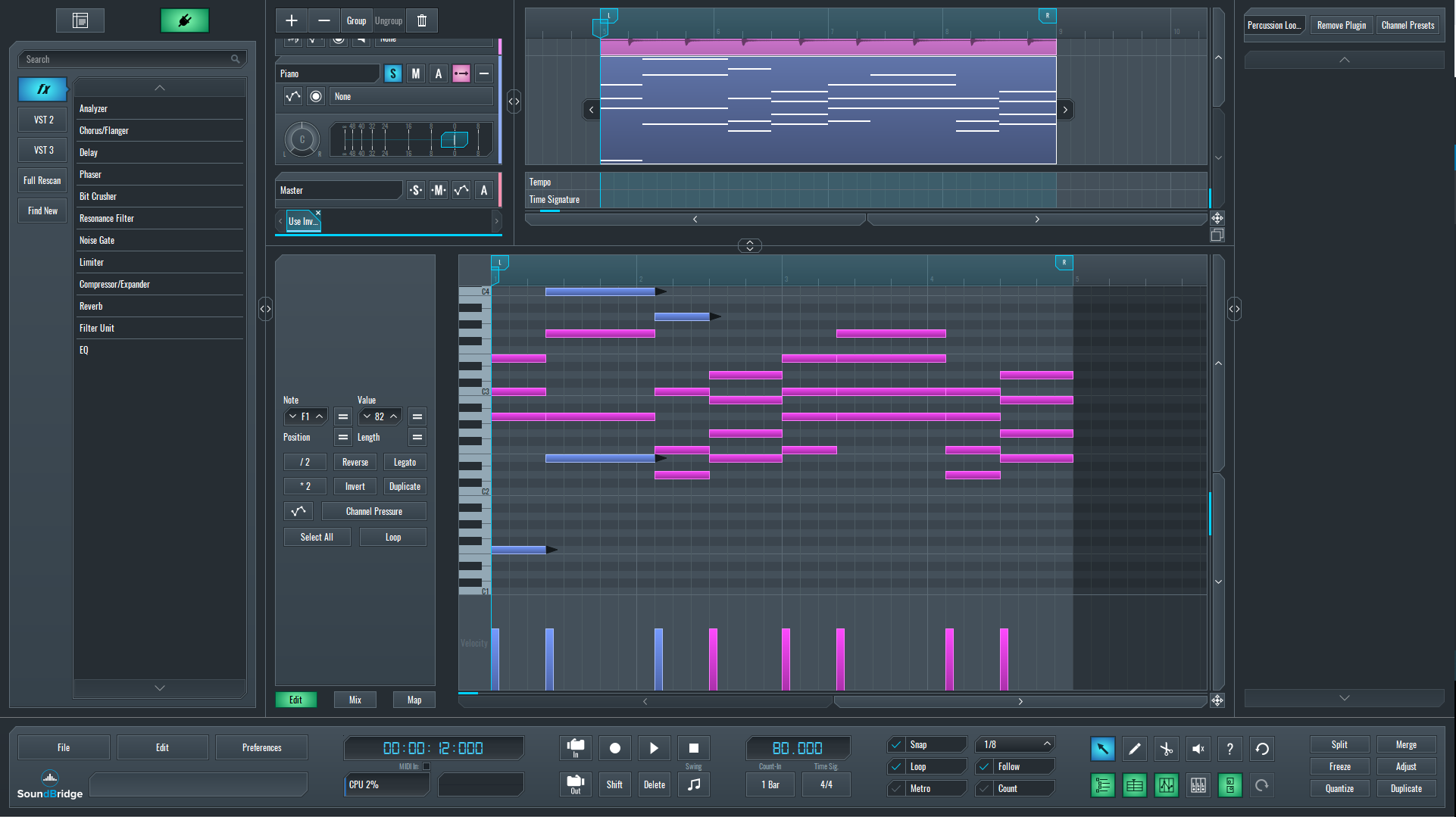 Let’s listen to the result

Let’s hear how our new chord progression sounds like, in the modified fragment.

Lastly, let’s listen to how our new inversions and voicings sound like in the context of the mix. As you will hear, new possibilities have come up that add interest, variety, and a different movement to the progression.