Because it offers many features along with the uncompromised sound of a live bass guitar, MODO BASS by IK Multimedia sits on top of its class. In the 3rd and final part of the live bass sound tutorial, we will cover some extra features and options that this virtual instrument has to offer. So, let’s start!

Last time we stopped at the “Strings” tab, and now we will move to tab right from it called “Electronics.” 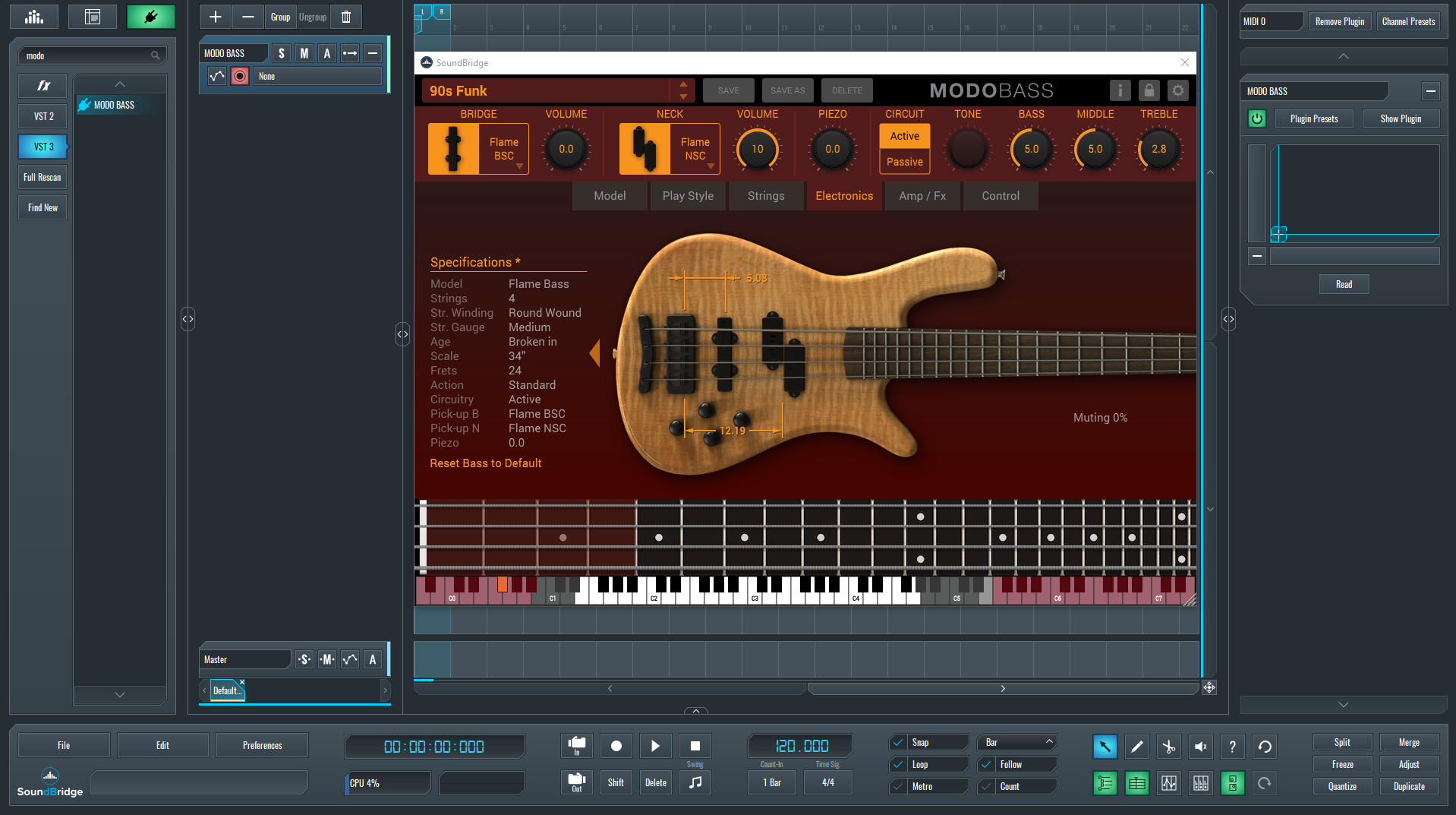 The “Electronics” tab is designed for setup your bass basically from scratch. This tab opens up with the setup for the model that you select as your foundation. Alternatively, if you’ve started with a preset, it opens with that preset settings. Any bass can have one or two conventional pickups plus an under-the-bridge piezoelectric pickup.  This is something that’s not commonly found on bass, at least not common enough to be on any of the stock models, though it’s turned up in some presets. Each pickup, including the piezo, has its volume control. For passive electronics, there’s a single treble-cut Tone control. Active electronics replace the single control with individual Bass, Mid, and Treble tone controls.

As in real life, you don’t have to use the stock pickups. While there aren’t any aftermarket boutique pickups to choose from, you can put a pickup from any of the models on any other model, as well as adding active electronics to pickups that were designed before anyone thought to build a preamp into the instrument body. Within the physical limits, when this tab is open, you can drag the pickup positions around with the mouse.

There’s some fudging (or rather, extended modeling) going on since there’s only one apparent 5-string pickup. However, when you add the fifth string, the strings stay evenly balanced with any pickup. There are some restrictions in that you can’t install some bridge pickups in the neck position and vice versa. This might be a mechanical limitation, or it could be that the developers said: “Aw, geez, if we have to model that many combinations we’ll never get the job finished.” Still, there’s a lot of flexibility here, and one that clearly makes a difference in tone. 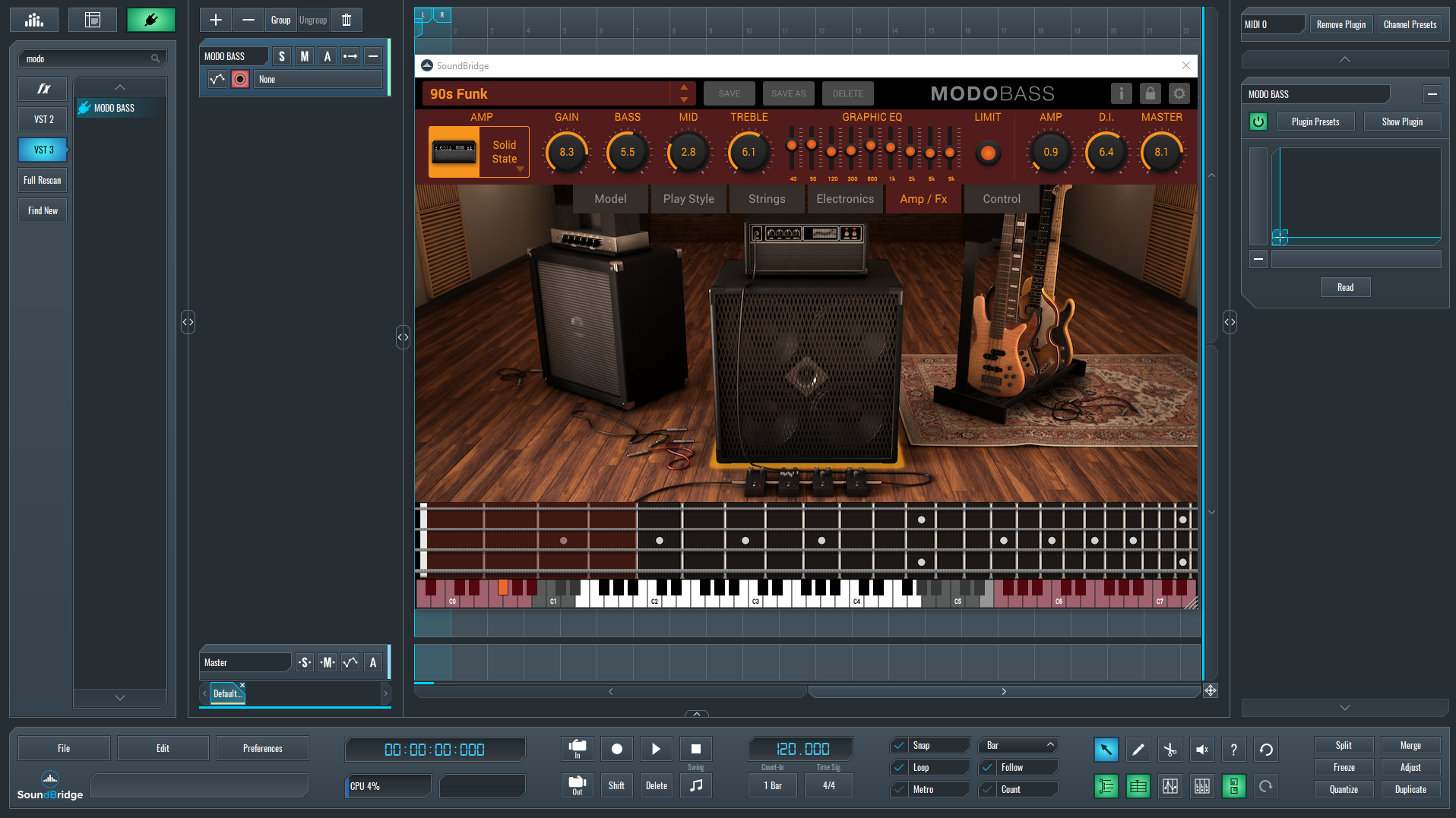 The next tab in the line is the “Amp/Fx”. While these aren’t integral parts of the physical model of the bass, an amplifier and effect pedals are often integral parts of a bassist’s sound. IK Multimedia has many years experience in modeling instrument amplifiers and effect pedals, and while they aren’t giving away their Amplitube amplifier models here, MODO includes two generic amplifier simulators based on the Amplitube modeling technology. One is a tube amplifier graphically reminiscent of the Ampeg B-15. The other is a solid state amp that doesn’t really remind me of anything in particular. In addition, there’s a virtual pedal board consisting of four effect processors selectable from a collection of seven.

Among the two amplifiers and seven effect pedals, there are a lot of different controls here. What confused me at first was that sometimes it appeared that the amplifier had a graphic equalizer, sometimes it had a compressor, sometimes not, and occasionally I found a control that I didn’t expect on an amplifier. It turned out that sometimes I didn’t notice that what I was seeing was controls for a pedal rather than the amplifier. It took me a while to recognize what was selected for control and how to select the controls that I wanted to adjust. 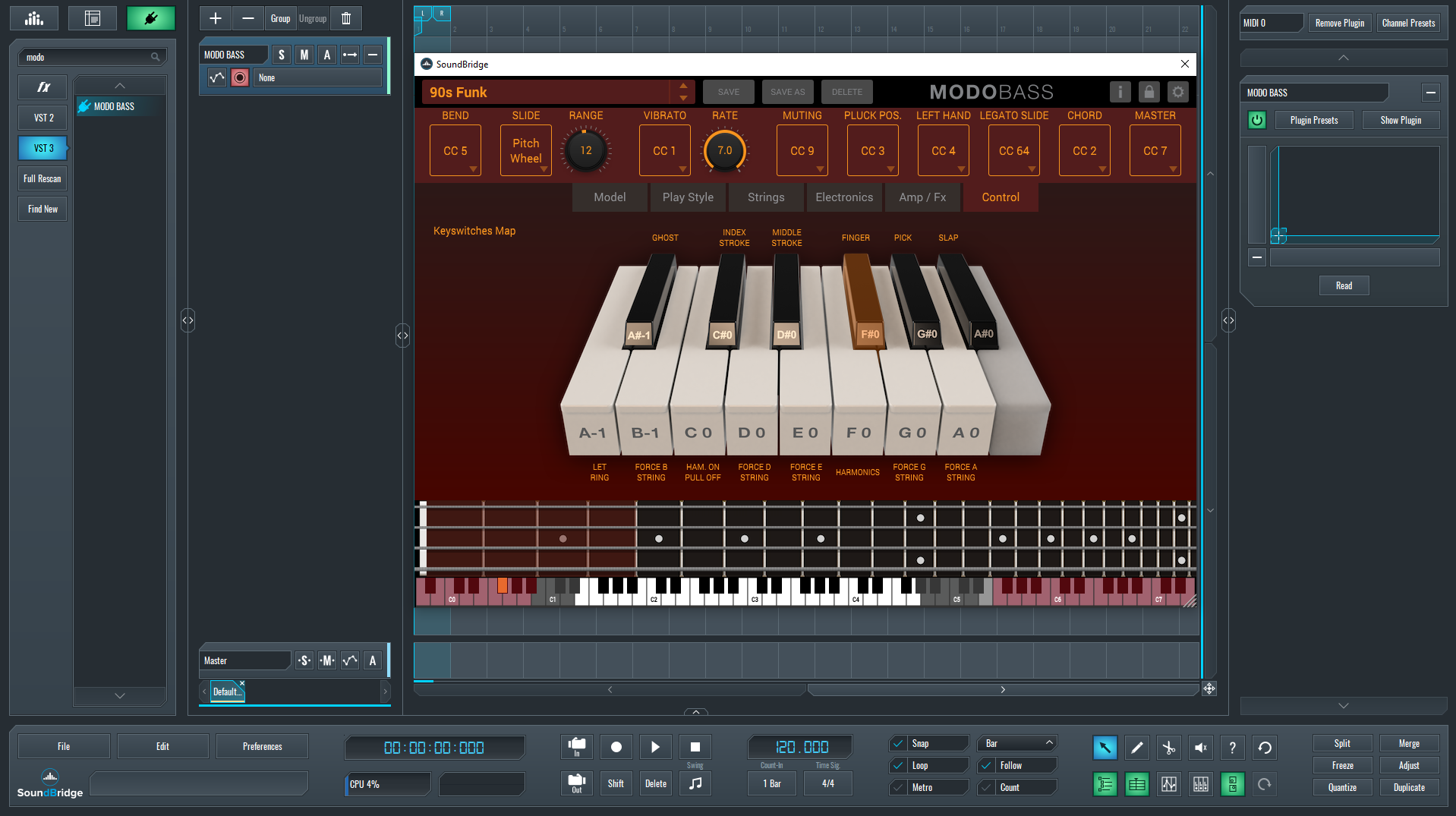 Last but not least is the “Control Tab” which offers real-time control of several playing style parameters. Each of the parameters in this control panel can be assigned to a MIDI Continuous Controller number. Most have continuous control and working these controls while playing can really be fun. Also, you can see the key switches assigned to a different key across the keyboard.

Finally, let’s hear a couple of more audio examples of this fine instrument.