In recent years, we have witnessed the emergence of many different effects that were shown to be quite potent for some complex sound mangling. Containing multiple effects in one plugin unit quickly became a standard. One of those effects that caught my attention is Wormhole by Zynaptiq. This plugin can be described as a sound-altering monster that can be used both for music and post-production. It is quite likely that with Wormhole you can get the sound that is not possible to get with any other plugin. You can create a vast variety of alien-robot voices, sci-fi ambiences, and soundscapes.

In the next tutorial, I will try to explain some of its functions and give you a few sound examples of what this awesome plugin is capable of. So let’s start!

Within Soundbridge I made a new audio channel where I placed the short acoustic guitar riff. Furthermore, I will put the Wormhole plugin on the channel rack. Lets first hear how guitar riff sounds without any processing.

Now let’s open the Wormhole and look at its interface and functions. 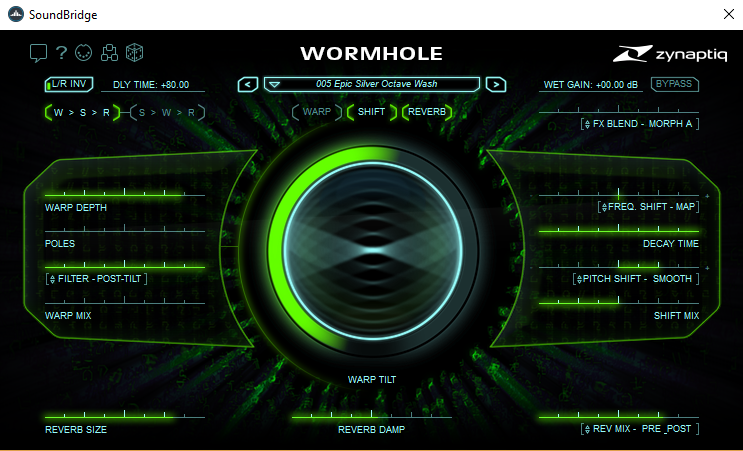 Wormhole contains three main sections, each with its own dry/wet Mix control for – Warp, Shift and Reverb units. Also, it has a final FX Blend stage (as opposed to merely mixing, although that’s available, too) the dry and wet outputs. The positioning of the Warp and Shift sections in the chain is swappable. You can activate the reverb pre or post FX Blend.

The Warp Section – is altering the frequency content of the signal to produce ring modulation, pitch/frequency shifter- and resonator-style effects.

The Shift section – contains both pitch and frequency shifters, the first with four octaves of range up and down, the second travelling up to 4 kHz either way, and each applied independently.

The Reverb section – contains top notch reverb algorithm that can be found in Zynaptiq`s older release called Adaptiverb that some of you are familiar with. Its three parameters – Size, Damp and Mix – control both the pre and post instances. However, the random tail modulation is generated separately for each. So, when running in ‘Both’ mode (using the pre-reverb in conjunction with the FX Blend Morph modes for sound design, followed by the post reverb for spatial ambience), you’re not just running through the same reverb twice.

After checking the Wormhole`s main features let’s see it in action. Listen to how the sound of the guitar changes in a lush soundscape by automating the FX blend Dry/Wet Mix.

For the 2nd example let’s take a short bass guitar sequence and apply Wormhole to it and again. Additionally, I’ll automate the FX Blend parameter. First, let’s hear it unprocessed and then processed with this awesome plugin.