In the world of audio production, there is always room for a bit more compression. If your goal is to tame down certain peaks or to use compression in other ways, a compressor is a go-to tool. While single band compressor units are good choices for most tasks, some multiband processors incorporate linear-phase technology. In the following tutorial, we will cover one such device, guide you through its interface, and in the end, show you some practical examples.

Let’s start by opening a previously made project in the SoundBridge: DAW. This project contains all the essential elements of the full mix, and it would be suitable for processing with the linear-phase multiband processor. 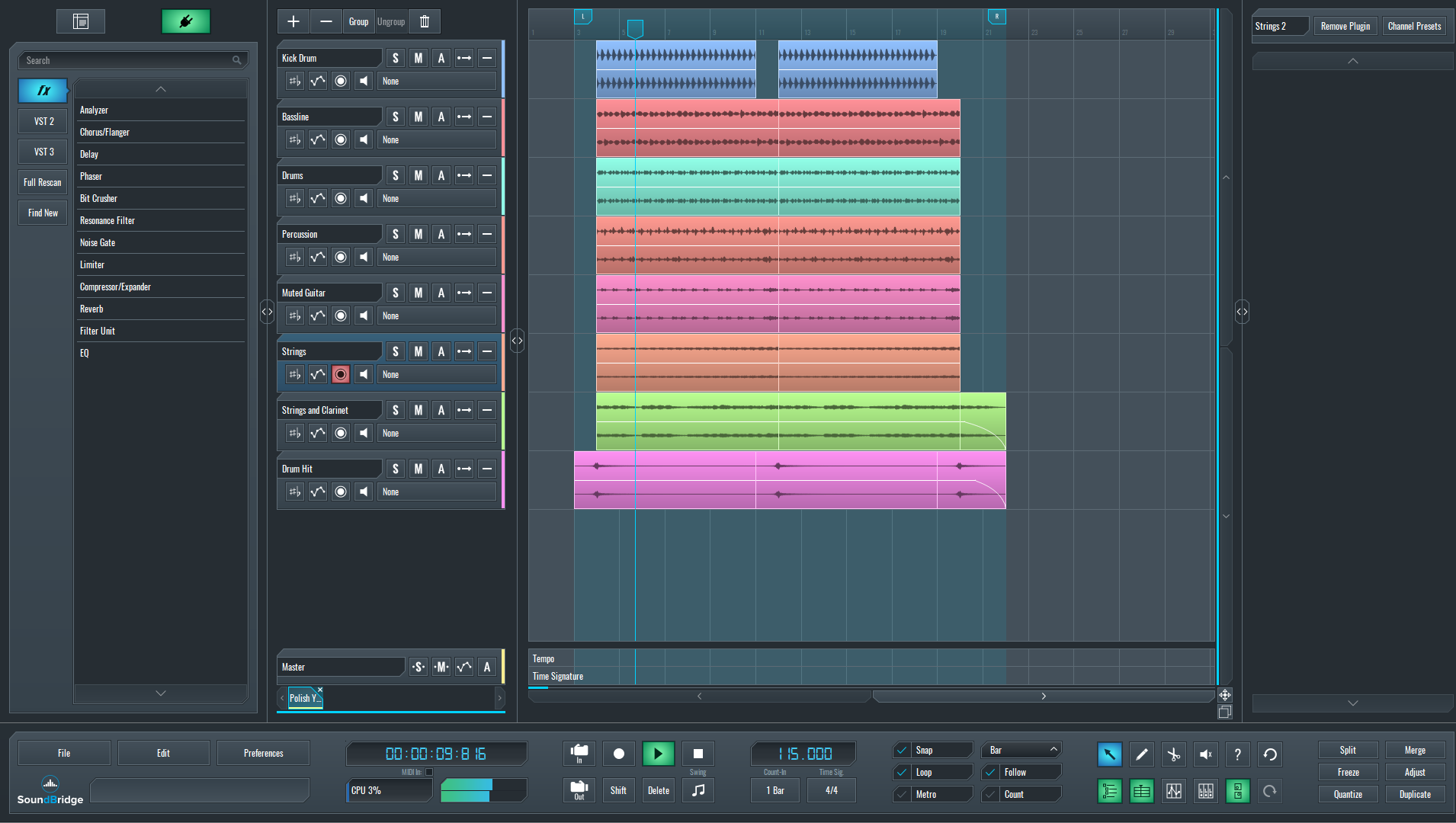 In this case, we will use a plugin unit on the master channel within the SoundBridge: DAW to give you a broader perspective of what this process is capable of doing on a full mix. Nevertheless, you can use it on just about every audio material. While there are other options for this kind of tool out there, we have chosen to use Linear Phase Multiband Processor by Waves Audio. Let us add a fresh instance of it to our master channel. 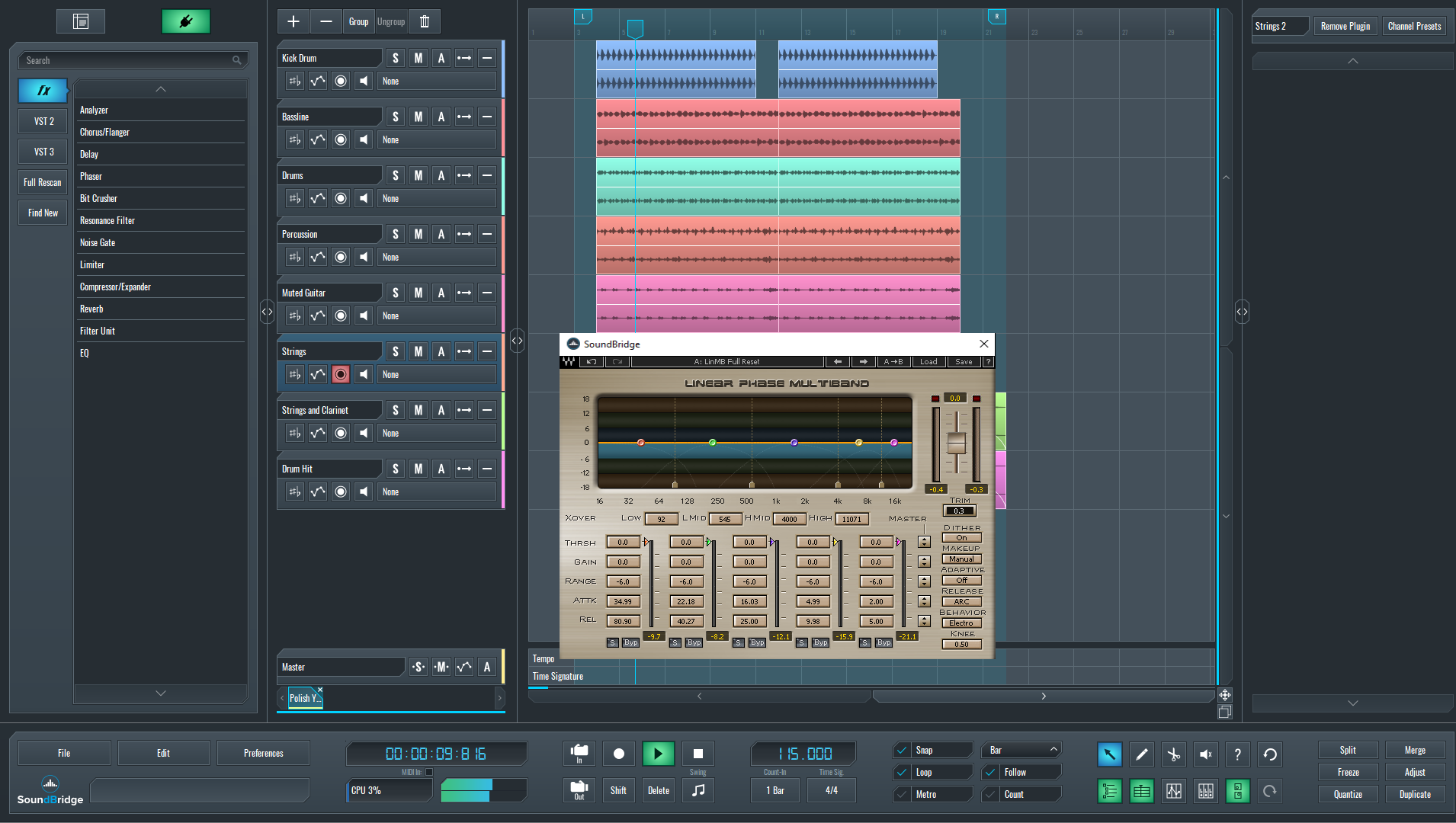 Multiband devices are especially handy when dealing with the dynamics of a full range mix. In a symphonic orchestra as well as in a Rock n Roll band, different instruments dominate different frequency ranges. Many times the low range dominates the whole dynamic response while the higher frequencies are riding on top. While it is the mixer’s or composer’s job to reach the desired balance, mastering engineers often find they need to do something about the dynamics of the mixed source. It may be to complement it further or indeed improve its quality. Moreover, they might need to make it as loud as possible for a competitive level, with as little degradation as possible.

When the LinMB is active but is idle, it presents only a fixed amount of delay. The output is 24bit clean and true to the source. When we use Xover to split a signal, we like to think that they are splitting the input signal to bands leaving everything else untouched. The truth is that any standard analog or digital Xover introduces different amounts of phase shift or delay to different frequencies. Further dynamic gain changes will cause additional modulation of the Phase shift introduced by the Xovers. This phenomenon was treated in C4’s phase compensated Xovers. However, the initial phase shift caused by the Xovers is still apparent in C4 and in its output. All frequencies are equal to the source in Amplitude but not in Phase.

When it’s important to achieve as much source integrity as possible, the LinMB goes a long way and splits the signal to 5 bands, maintaining a 24bit clean starting point for applying different dynamics processing to each of the bands. Transients are the main sonic events that benefit from Linear Phase. Transients contain a wide range of frequencies and are highly “Localized” in time. A non-linear phase filter that shifts the phase differently for different frequencies will “smear” the transient over a more extended period. The Linear Phase EQ will pass transients, maintaining their full sharpness.

After a brief introduction of multiband and linear phase benefits, let’s try to explain the parameters in more detail. The 4 Xover frequencies, which we can see below the graphical display, are set directly under the graph by grabbing their graph marker or using the text button. These define the cutoff frequencies in which the WideBand signal will be split into five discrete bands.

Each band of Waves LINMB has five adjustable dynamics settings. Threshold, Gain, Range, Attack, Release, Solo, and Bypass. These functions are similar in most dynamics processors. However, in this processor, they affect the dynamics of one of the five bands. The Range may seem unfamiliar, and basically, it is in place of the well-known Ratio, but it defines both the intensity of gain adjustment and the limit of gain adjustment.

In the Global section, you can find master controls, which are ganged controls for moving all the per band controls at once. It’s different in the overall processor output – Gain, Trim, and Dither. The Makeup control allows selection between manual mode and Auto Makeup.

Adaptive (Explained further in the next chapter).

Behaviour – Opto or Electro modes affect the nature of the release. Knee – soft or hard knee or any value in between.

Once we have done with the introduction of LINMB by Waves Audio and its functions, it is time to hear it in action. We will first listen to our track unprocessed and then processed with LINMB.

There is quite a distinguishable difference between unprocessed and processed versions regarding the openness of mix, taming the harshness and other aspects. We encourage you to experiment on your own with this great tool!