With constant growing soft-synth/effect technology in the audio production world, we have a chance to use some instruments that were considered impossible to synthesize just over a couple of decades ago. Instruments like piano, electric violin, and electric bass guitar are just some of them. Physical modeling audio synthesis is an excellent way to go when trying to faithfully replicate the sound of a live instrument into the digital domain. Consequently, in the following tutorial, we will present you a groundbreaking software instrument called MODO BASS designed by IK Multimedia.

Since MODO BASS possesses many features, we will cover its functions and various instruments in a two-part tutorial. So let’s start with a brief introduction and then move to some audio examples. As usual, we will start by using our SoundBridge: DAW as a sequencer.

MODO BASS is the industry’s first true physically modeled instrument from the leader in analog modeling technology. The development itself took eight years in collaboration with one of Europe’s oldest universities. MODO BASS is an entirely new breed of instrument that delivers the best of both worlds: the realism and sound of a master musician playing an instrument and the convenience of a plug-in virtual instrument.

Every component that contributes to the unique tonal properties of a bass player playing an instrument has been modelled, The effects of each component and the interactions between each tone variable have been recreated to give you a dynamic, living breathing and ever-changing performance. You can produce a sound by triggering recorded samples of instruments. This is because of the sample-based core od virtual instruments. 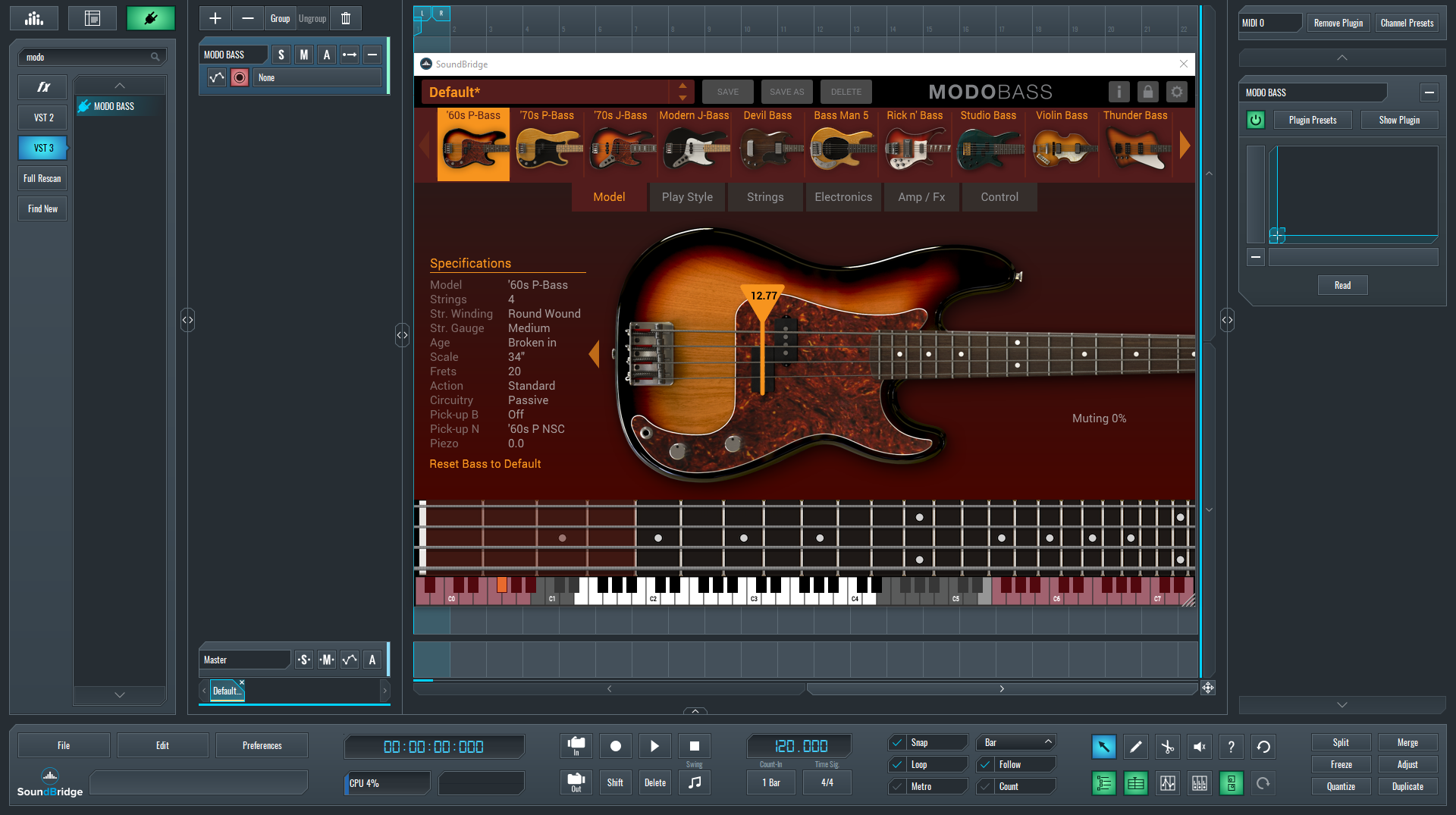 The interface itself is quite big. However, it is scalable to fit your screen if you like to see it even bigger.

At the top section of the instrument interface we can see the preset menu followed by the “Save,” “Save As” and “Delete” options. Also, in the top left corner, we can see the icon for information about the developer and potential updates of the instrument, authorization, and icon for options where you can set the value for the velocity cure and so on.

Things get interesting at the lower section of the interface. Here you can choose from a wide variety of some of the most famous live bass guitars. Furthermore, as you click on one of them in the row, you will see a picture of the instrument shifts in the central portion of the interface down below.

On the left side of the instrument picture, there is a useful list of specifications for the selected bass guitar. It contains a bass model, number of strings, scale, the number of frets and so on. You will notice that there is a big yellow indicator for the position of playing the strings. Playing closer to the bridge provides a more pronounced upper-frequency tone while playing closer to the neck accentuates more low and mid frequencies delivering a “rounder” tone. You can also select the type of sustain and ring of the individual notes.

The lowest part of the interface contains a magnified guitar neck with frets followed by a piano roll. Here you can check the sound of the instrument.

After the initial introduction to some of the MODO BASS features, let’s hear a couple of audio examples. In part 2 of the MODO BASS tutorial, we will tackle some advanced functions of this remarkable instrument.