Loudness and Level – The Difference

In the early 1930s, two researchers at Bell Labs named Harvey Fletcher and W.A. Munson uncovered perhaps the most significant psychoacoustic phenomenon in history. They found that the frequency of a sound affects our perception of its loudness. In other words, two different frequencies at the same mechanical level may not sound the same level to us because of the way our hearing mechanism processes them. In the researcher’s experiments, they played dozens of tones for listeners against a 1 kHz tone at the same level then asked the listeners what seemed louder.

DIFFERENCE BETWEEN LEVEL AND LOUDNESS

The two tones below are the same tones from above but are equal in perceived loudness (same Phons).  Although their peaks are nearly 20 dB apart, they sound equally loud because of hearing sensitivity. I simply attenuated the higher tone by about 20 dB with a bell filter and bounced the output into a new analysis so you could see.

After analyzing the data, the researchers came up with the fletcher munson curves – a graphical representation of what levels sound EQUALLY LOUD for all frequencies and stages of loudness. This graph has since been perfected using results from a bigger pool of testers and renamed – the equal loudness curves. 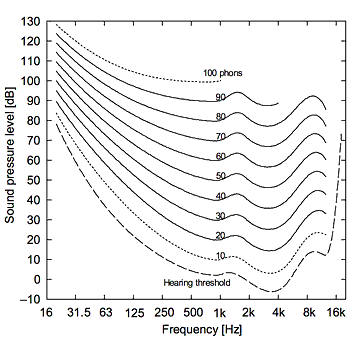 How do I read this graph?

Frequency is on the X-axis. Level (dB SPL) is on the Y-axis. The lines represent equal loudness across the spectrum for different ranges of loudness. Phons is a unit of loudness – not to be confused with dB, which measures level. The higher a frequency falls on the curve, the more gain it will need to sound as loud as 1 kHz at the same mechanical level – and vice-versa. Equal loudness curves are inversely proportional to how our ears treat input. If our ears were an equalizer and you were to flip these curves upside-down, the settings on the equalizer would match the upside-down curves.

Equal loudness curves reflect the settings you would need on an EQ to in order to counteract what our ears do. If our ears were an equalizer and you were to flip these curves upside-down, the settings on that equalizer would match the upside-down curves.

The curves tell us that 250 Hz at 50 dB sounds as loud as 2 kHz at 38 dB. I know this because these are the levels the two tones line up with when on the same loudness curve. Look at the picture below… REMEMBER – THE CURVES REPRESENT EQUAL LOUDNESS 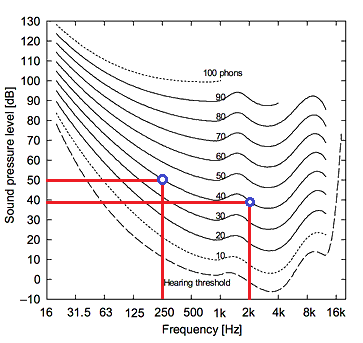 They tells us that 63 Hz at 100dB sounds as loud as 4 kHz at 80dB. This example relates directly to and validates my audio samples in the introduction of this article. 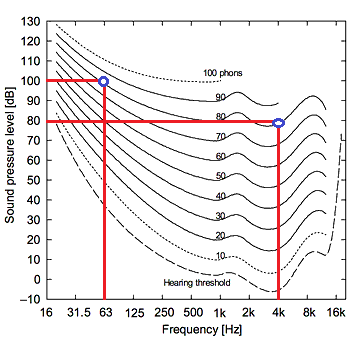 So what is this REALLY telling me?