How to Make Future Bass Chords From Scratch

WHAT IS FUTURE BASS?

Future bass is a music genre that focuses on hard bass lines with detuned synthesizers. The sound waves are often modulated using automation or low-frequency oscillation which controls the cutoff of an audio filter (typically a low pass or high pass filter), making the waveform sound louder or quieter. In addition to this, it is common to find the utilization of sort of a “twinkly” sounding rise (gradual rise in pitch), including arpeggio chords, and vocoders. In fact, Future bass genre is closely related to the post-dubstep movement in the United Kingdom. It is comparable to chiptune and glitch hop, and it’s getting increasingly popular in recent years.

In the following tutorial, I will show you how to make a future bass synth chord sound in Massive by Native Instruments. The future bass chord will be based on the automation of LFO and Performer sections inside Massive. Additionally, this will show you how easy it is to make different rhythmic changes within one chord sequence. So let’s start!

As usual, we will start with creating a new MIDI channel within SoundBridge. Consequently, I will place a new instance of Massive onto it. It’s not so important to go thru the process of making the sound from oscillators in this tutorial, so I will move forward to modulate the filter section. But before I do that, let’s hear how our chord sounds accompanied with some rhythm.

After setting the filter section on, I will modulate it with three different performers. Starting with the first one, I will choose slower beat sync (let’s say 2/4) from the performer 1 section. After that, I will modulate it by dragging and dropping the cursor icon on the filter section. The curve I have selected is a kind of a ramp which is gradually increasing the filter cutoff parameter. Finally, it sounds like this:

However, it is going to be a bit boring if we leave our sequence like this. Therefore, let’s move to the modulation of performer 2 and performer 3. As you can see from the picture below, all three performers are being sent to the filter cutoff parameter, to modulate it. Compared to performer 1, performer 2 and three will have different beat sync settings for making it more interesting. 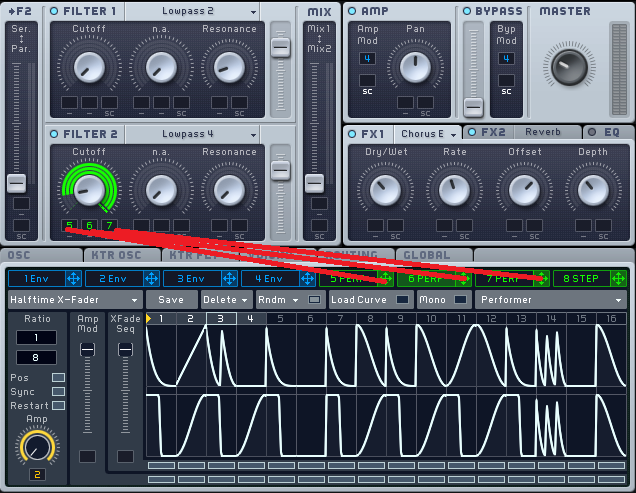 Next, I’ll be moving on to an important part which is a Macro`s section within Massive. Therefore, I will send the amp parameter found in all three performer sections to individual Macro controls. This is because I’ll need to switch between performers in our chord progression. As you can see in the picture, I will repeat the same process by dragging and dropping the cursor icon of the Macro 1, 2 and 3 to the amp parameters of Performer 1, 2 and 3. 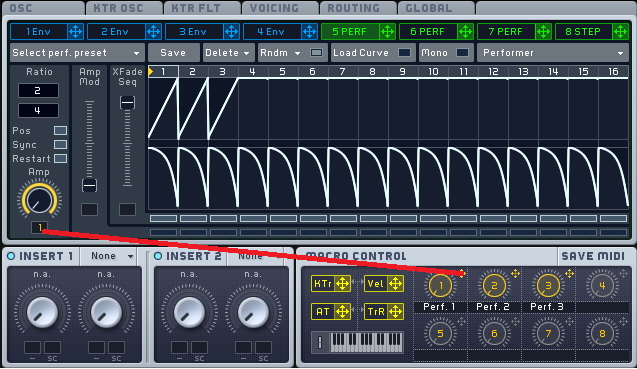 Moving forward, I will automate those 3 Macros alternately, using automation lanes in Massive`s Midi channel. In the end, let’s hear the final result.