The reverb effect is one of the most versatile audio effects in music production realm. From its origins to modern days, reverb effects came a long way, offering more and more possibilities to shape and color the sound. There are certainly creative ways of using the reverb effect, and in this tutorial, we’ll show you once such technique.

As usual, we have previously made a short sequence inside the SoundBridge: DAW, which contains all the elements required for the full mix. Among Drums, Bassline, and other stuff, we will concentrate on the short chord stab on which we’ll apply the reverb effects mentioned above. 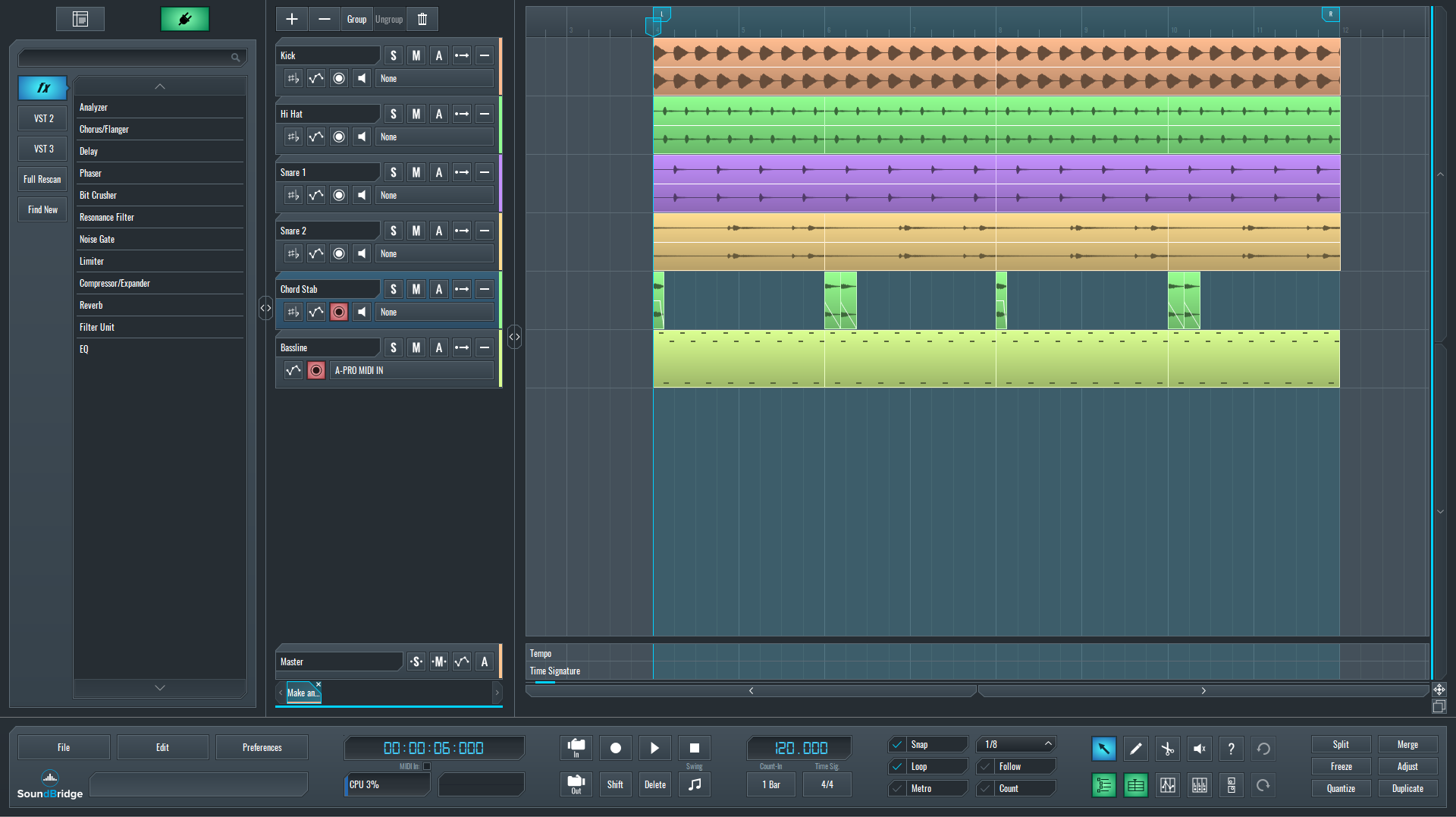 Lets first hear how this synth chord stab sounds solo and then together with other elements of the mix.

There are other reverb options also suitable for this reverb technique on the market, but for the sake of this tutorial, we have decided to use Blackhole designed by Eventide. So, let’s go and add a fresh instance of it on the channel of synth chord stab. 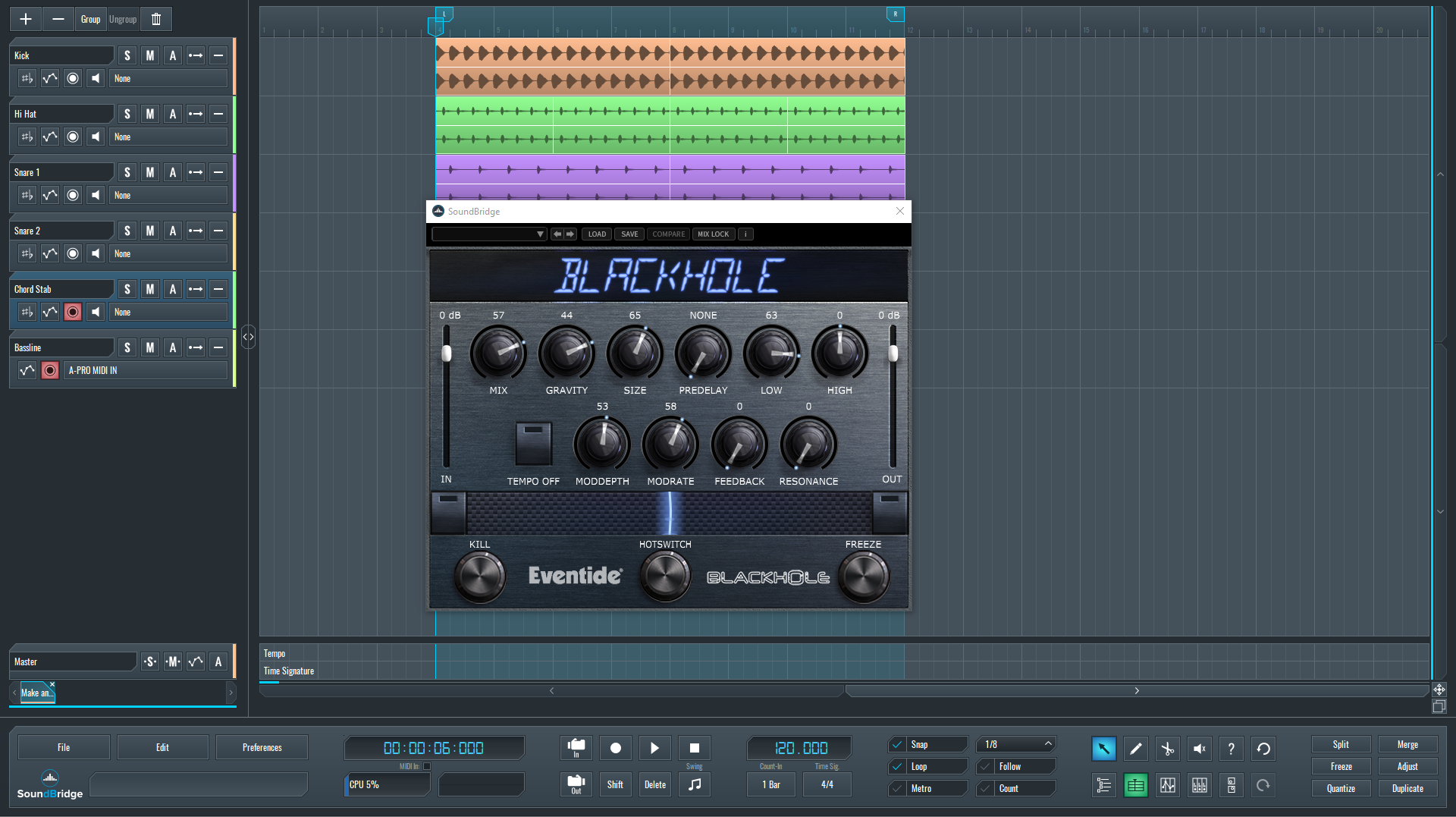 Blackhole by Eventide is a kind of reverb effect that allows you to create virtual spaces that are quite stunning. At large sizes, its soft attack and lingering, harmonic tails allow it to really shine on guitars, strings, and pads. At small sizes, those very same qualities can add an angelic sheen to vocals or turn a simple drum track into an otherworldly rhythm section.  While it’s true Blackhole is capable of creating space-warping special effects and drones, it’s also capable of creating musical and subtle effects you’ll find useful for highlighting key instruments or painting a backdrop for your mix.

The interface of the Blackhole it’s quite straightforward. On the top, we can see a range of parameters like Mix, Gravity, Size, Pre-delay, and Lo/Hi EQ controls. If you turn the gravity parameter to the left, it reverses the reverb tail. On the other hand, pointed to the right, it directs the reverb tail forward. Below that, we have another line of parameters like Modulation Depth and Rate, as well as Feedback and Resonance. On top of that, there is a Tempo switch, which, when engaged, syncs the reverb Pre Delay to sequencer host tempo.

The bottom part of the interface offers some exciting parameters to control as well.

Kills the input to the reverb section allowing you to hear the reverb tail fade out. This can be useful to help dial in the sound, or it can be automated for a more tremolo-like effect.

Sets the reverb time to inﬁnite, sets Mod Depth to FREEZE (equivalent to Mod Depth at ”0”), and mutes the input, effectivelly freezing the audio in the reverb buffer. Making changes to some controls when FREEZE is active can allow for unusual sound design.

Allows you to toggle between two settings for any combination of knobs instantaneously. See the ”Using the Hotswitch” section for more details.

After a brief introduction to Blackhole, let’s move to some practical examples. As mentioned in the title of this tutorial, we will try to make and uplifter by using this effect. In order to do that, we will set a large Size and automate it to have an uplifting effect.

Lets first hear how that applies to synth chord stab solo, and then we will listen to it in full mix.