Although Trap music has been hitting us with infectious boomy 808 kicks since the 1990s, the genre did not branch off into popular EDM until 2012. It then absorbed the musical conventions of the EDM scene – like drops and build-ups – and spread its addictive kick over the sub-genres. The result is a sound spreading like a wildfire that continues to raise curiosity among producers.

Producers adopted the term 808 from Roland’s TR-808 drum machine. In the 1980s, when it was developed, it was the first to feature this characteristic kick. Today, with the tools provided by modern synthesizers, it’s easy to recreate this basic TR-808 patch. In fact, all we need is a sine wave with a pitch and volume envelope.

Unfortunately for us producers, the standard for 808 sounds has matured. It will take more than just a couple of modules to meet the requirements of your average bass-head. There are two main methods of creating a trap kick: using the pitch envelope of the sub as the transient, and using a kick sample as the transient.

Native Instruments’ Massive has everything we need to create the sound we’re looking for. We’re going to start by loading up an instance of Massive with its default patch.

First, switch the waveform to sine-square and move the wavetable position up a little. This will add some harmonics to our waveform – providing solid frequency content around 130 Hz. (See Blog: Why Waveforms?)

Next, go to envelope 1 and turn the attack and decay down.

Assign the envelope to the oscillator one (OSC1) pitch slot and turn it up to somewhere between 20 and 25 semitones (shown in the first picture). This will give us a transient.

Adjust envelope four like envelope one but give it a little more decay. This is the amp envelope by default, so we have to shape it the way we want to articulate the kick.

In the FX1 module of Massive, add some Tele Tube to fatten up our kick. This will help emphasize the harmonics we added earlier by moving the wavetable position up. Then, in the EQ tab, boost the low shelf and lower the high shelf. Be careful not to overdo it! Boosting the sub-region too much reduces headroom and risks adding interference.

For the INSERT 2 module, add a parabolic shaper and turn the dry/wet completely to wet. Play around with the drive until you get an effect you like. Again, don’t overdo it!

Since we’re dealing with low-frequency sine waves, our sound is prone to clicks. We can reduce the risk of clicks by changing the voicing to monorotate and trigger to legato in the VOICING tab.

That’s it for this method. Keep in mind; these are suggested parameters, and nothing is set in stone. Play around with the patch and tweak it to your liking.

Trap Kick – Made in Massive

For this method, we can actually use the patch we just created. The only difference is – this time, we’ll use an imported drum sample as a transient. This helps give the kick more presence in a busy track.

The first thing we’re going to do is lengthen the attack of our sub kick patch. This will prevent the sub-layer from conflicting with the transient we’re about to place there.

Next, I’ll go through my sample library and find a sound that I think will work as the transient for this trap kick.

Once I have it, I’ll open up a new instance of Battery 4 and drop it into a slot on the sample grid. 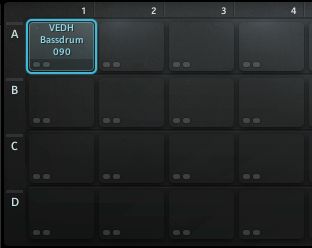 In this case, there is not much I have to do. The sample I’ve found has the right tone for its purpose. I’ll start by making a simple change to the articulation using the volume envelope.

By shortening the decay, I am ensuring it will not conflict with the Massive sub kick when it is triggered.

Finally, I’ll add some compression to smooth out the dynamics of the sample. This will help it blend with the sub kick.

That’s it for this method: our final kick sounds like this.

Now you have the knowledge and tools to make your own trap kicks. As you can see, it does not take specific tools to create one. Meaning, you can try going through these steps in other synths like Serum or Sylenth and compare results. It’s possible these sources will produce a kick that better suits your style.