In the more popular strands of EDM, we often come across huge, wall of sound, chord leads. They can often be used to support a strong vocal part in a breakdown/build-up or over the drop as the central element. Although there’s not one single way to recreate this sound, this article will go over some steps in Massive. This will put you on track to making your own massive chord leads. Once you recreate the patch, go ahead and tweak it in any way you want; this is the only way to create your own characteristic sound.

When working with large sounds like this, it is good practice to split the spectrum of the sound up into two or three different layers. In this particular example, I will use two: a chord layer and a bass layer that supports it.

I’ll start by creating a new MIDI track with Massive on it and penciling in some chords. This will allow us to derive our final patch from the initial Massive patch without having to trigger notes constantly.

This particular progression of chords is in G minor. It goes from the tonic “G -” to “Ebmaj7” which is the chord based on the 6th degree of the G minor scale. 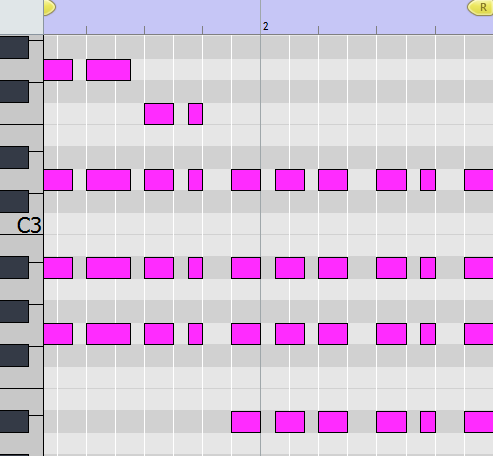 Now, in Massive, I’ll set up the first two oscillators. There are plenty of parameter settings to choose from, and different combinations have different characteristics.

I’ll make oscillator one (OSC1) a “Disto” wave with all three parameters set to the maximum value.

I’ll make oscillator two (OSC2) an “Additive 1” wave, pitched an octave up (to give the sound a bigger range) with the wavetable position and intensity set to maximum and the amp volume a little after 2 o’clock. 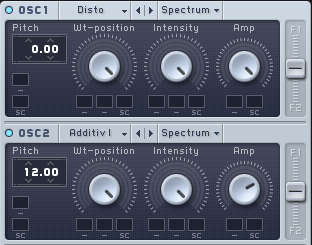 In the volume envelope (4 Env), I will set the Sustain (Decay Level) to maximum (so that the full energy of the sound will be sustained for the duration of the note) and decrease the attack ever so slightly (to smooth out the transient of the chord).

In the voicing tab, I’ll crank up the unison to 8 voices and enable Pitch Cutoff and Pan Position to give the sound some depth. Panning the voices using the pan position will spread them out across the stereo field, simulating a more full sound. At this point, the issue that arises is phasing. The voices will interact with each other constructively and destructively (See Blog: Phase and Phasing), causing an imbalanced stereo image. To reduce this effect, we can detune the voices by sliding the Pitch Cutoff fader to the right just a couple of notches.

I will add a tiny bit of vibrato by going to the “OSC” tab, turning the vibrato rate up past 12 o’clock and the depth up a little.  This feature periodically deviates the center pitch of an oscillator to give the sound a little more movement.

To change the character of the source, I’ll add some phase modulation to the oscillator one.

Then, I’ll add some noise by turning the color knob to full and amp knob to about 9 o’clock on the noise module. This will layer a discrete band of white noise to the high frequencies. It helps by occupying gaps in the high range of the frequency spectrum and adds energy to the overall sound. To help blend this white noise layer in with the sound of the oscillators, I will add a P shaper in Insert 2.

We now have a solid chord layer. However, if we really want to take advantage of the entire spectrum, we need to add a support layer occupying the low mids.

I will start off by dropping an instance of Massive on a new MIDI track. Then, write out a bassline that supports the chords from part 1. Since there are only two chords, I’ll have the bassline consist simply of the root of each chord (G, Eb). It will be played in the same rhythm as the chords in the other layer. 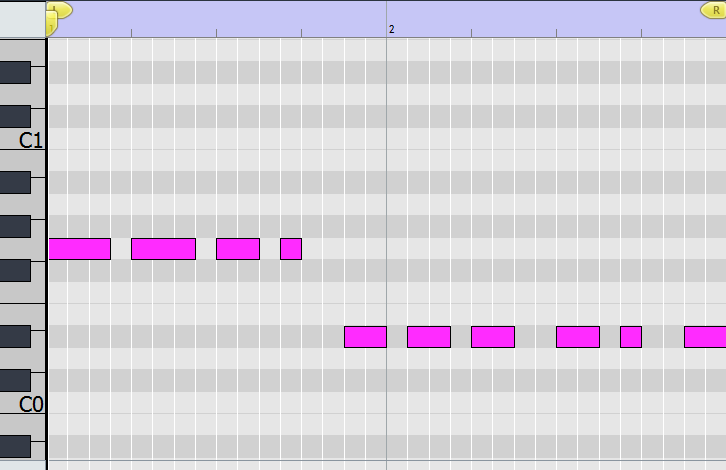 Now in Massive, I will start off by setting up the oscillator. In this case, I will use only one oscillator set to Drive 1 with all three parameters at the maximum setting.

In the envelope tab, I will increase the sustain and reduce the attack. This time, I won’t set the sustain quite at maximum because the bass sound is a bit harsh. We want to give all the layers a little room to breathe throughout the envelope.

In the voicings tab, I’ll add a second voice so that I can spread the sound out. Now, I’ll turn the Pitch Cutoff and Pan Position on and slide them to the right like in the picture below. The detune will help reduce phasing. In addition, the position will pan the voices left and right, respectively, to widen the sound.

As with the chord lead, I’ll add some phase modulation to the bass to change the characteristic quality of the sound.

I’ll add a P shaper to insert two for the same reason. It will help get rid of some of the mids and focus the lower frequencies of the bass layer. It will also keep the bass out of the way of the chords that are sitting on top.

Finally, I will add some Chorus in FX1. Like in layer 1, it adds some movement to the layers. However, this time, I will turn the depth down to 0. You don’t want the bass moving too much; as a support layer, it has to be firm. 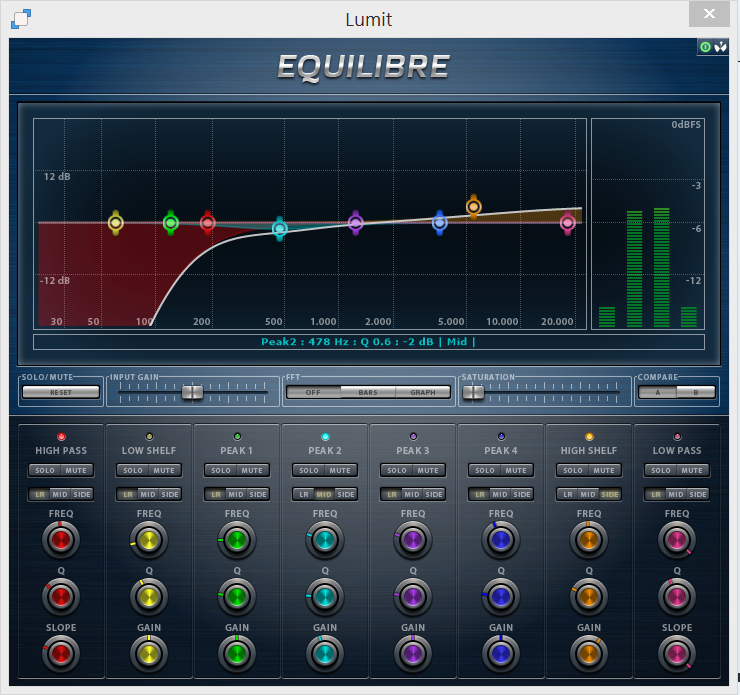 Now that we’ve modeled the sound within Massive, we can add some effects from the DAW or from plug-ins to strengthen and blend the two layers.

Starting with the chord layer, I will add an instance of Equilibre, a free third-party EQ that supports mid-side processing.

High-pass is critical for the chord layer. It blocks out frequencies below the cutoff so that they do not interfere with the bass layer.

Peak 2 will attenuate frequencies around 500 Hz but only for mid information (information common to both the left and right channels). This will help widen the sound; and, in the context of a full track, will create space for a mid-range vocal.

Finally, I’ll boost the highs on the high shelf but only for side information (information that differs between the left and right channels). Again, this will support the impression of width. 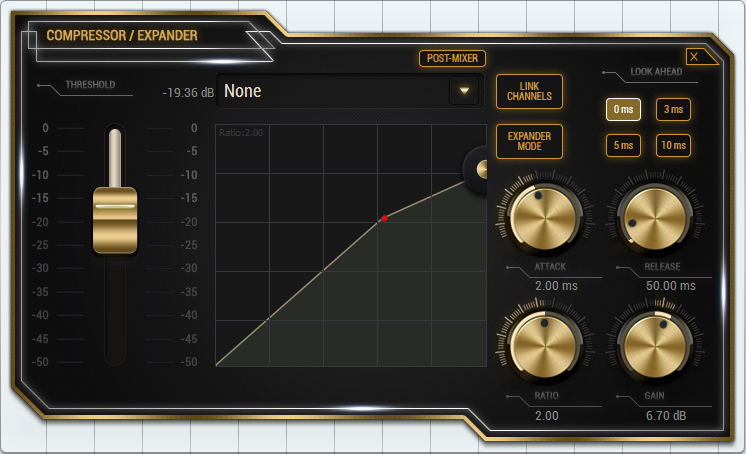 I did not do a lot of effect processing on the bass layer outside of the synth. This is because I usually do it to improve the overall mix of a full production. The only element to blend the bass with is the chord layer. With this in mind, the most logical step was to simply reduce the high’s in the sides where, in the chord layer, they are boosted. By using mid-side processing, the synth will retain its midrange content. Yet it won’t interfere with the high range content in the chord layer. This allows the two layers to sit tightly in the mix, without any muddiness. 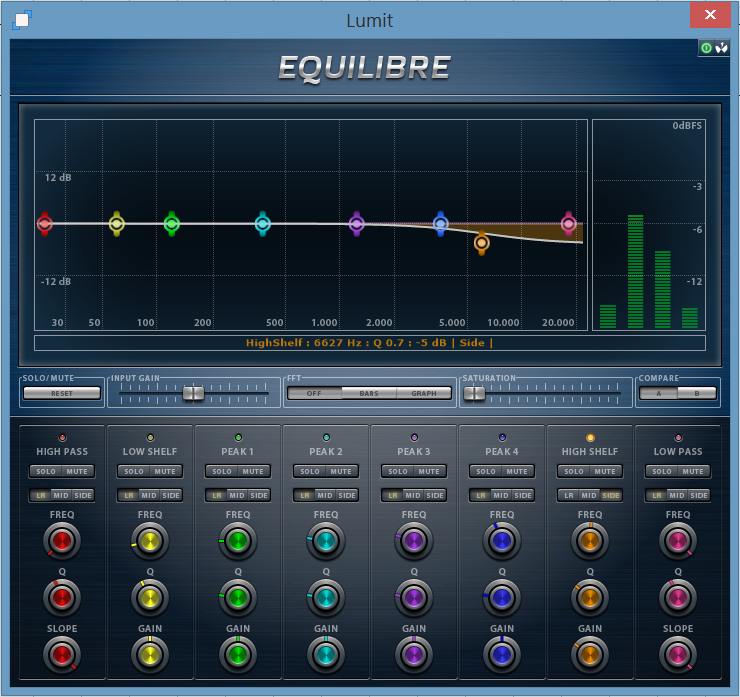 You can Download the chord patch HERE and the bass patch HERE.

There you have it! Designing big leads in Massive can be a daunting task at first. However, when you get familiar with the features of the synth, you realize that it consists of straightforward steps (modules). Understanding the signal flow step by step will help you discover and design your own personal pallet of sounds. Ultimately, this will help you define your style and artistic vision.