How to Make Mau5 Chord Stabs

All things considered, one of the most beautiful sounds you will ever hear in an electronic production is a well placed synthetic chord sound. You have probably heard these in Deadmau5 tracks like The Veldt and October. Moreover, the sound can be made on analog gear, digital hardware, or on a VST like Serum or Massive. In this tutorial, I will walk you through my method for designing and producing a very pretty chord stab sound in Massive. It consists of 2 oscillators, a low-pass filter, envelopes, the performer, and some effects.

Open a new instance of Massive.

Firstly, make the first oscillator a square wave and the second oscillator a sawtooth wave. To do this, select the square-saw waveform for both oscillators and turn their wt-positions to the far left and far right, respectively. Furthermore, transpose the first oscillator up one octave (12 semitones) and the second up nearly an octave (11.90 semitones). Generally speaking, this will induce some beating and will seem to widen the sound bit. In addition, adjust the intensities and amplitudes of these oscillators to your liking. I have found that the sound works a little better with the sawtooth wave less intense but a bit hotter in the mix than the square. Send 100% of both waveforms to Filter 1 by bringing up the filter mix fader to the top on each oscillator. 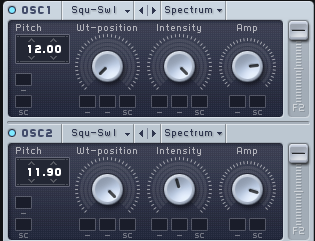 Furthermore, turn on Filter 1 and make it a Low-pass 2 filter. Set the cutoff at around 9 o’clock for now, we will be modulating and automating this later. Keep the resonance all the way down but drive it a bit by bringing up the output fader to full.

For the amplitude envelope (4 ENV), you will need to bring the sustain down to about 9 o’clock and lengthen the decay and release as well. Try about a 2.5 second decay and about a 1 second release and tweak from there.

Assign envelope 3 (3 ENV) to control Filter 1 cutoff by dragging its cross-hairs icon to the first square slot under the cutoff parameter. Drag the range up so that it makes it decay from about the 10 kHz range down to about 100 Hz.

For this envelope, use a significantly longer decay than we did for the amplitude envelope. It should be almost at the max duration. Bring the sustain down and the release up to about halfway. Bring up the velocity sensitivity to about halfway.

Use envelope 2 (2 ENV) to control a small range of the wt-position of oscillator 1. Use a slightly shorter decay than in envelope 3 and no release. Bring the sustain all the way down.

To continue, go into the Voicing tab and bring the unison up to 2. Enable the pitch cutoff fader and nudge it very slightly to the right. After that, enable the panning spread and bring its fader all the way to the right. This adds some more sense of movement and space to the sound.

Now, we will use the performer (7 PERF) to create a rhythmic pulse. In addition, I chose to use an eighth note rate but you can use any note duration you want. Most of the default settings on the performer are ideal for this type of sound design. What is more, the only thing you have to do is assign it to modulate the sustain of envelopes 3 and 4 and chose the rate and ranges. All in all, there is no way for me to tell you the best rate and ranges for this – it has to be done by ear. Listen for sweet spots that work with your particular notes and tempo.

For effects, use the dimension expander and a reverb. Therefore, keep the dry/wet mixes around 7 o’clock for now (we will automate this on the reverb) and the sizes at about half.

Automation is crucial to this sound, especially on cutoff, decay, and dry/wet. I chose to automate all three of this by “reading” them to Lumit’s rack module and drawing in some information in the associated track lanes. In addition to this, the automation should be gradual and smooth. Important thing to remember is to avoid linear and transient shapes – organic and natural is better. Listen to some Deadmau5 tracks like The Veldt and October for the right sort of contours. 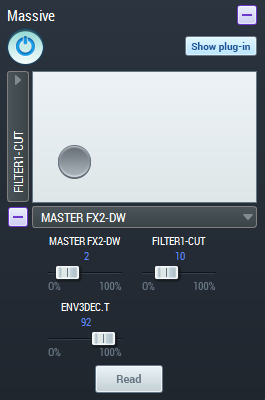 To conclude, these sounds are usually accompanied by a sub-bass and a kick drum in some kind of build-up. Consequently, I made my sub-bass using the sub-oscillator in Serum on a sine wave and my kick drum is a sample from the Battery 4 factory library. There is some subtle side-chain compression on the sub and stabs keyed by the kick (soft ratio). In the end, this is what my Mau5 Stabs sound like with some context…