As Dubstep evolved from earth-shaking sub-focused grooves to screechy madness, it gave birth to some basses that have become standard repertoire for producers. Although they have, frankly, been overused, it is useful to know how to recreate them. They can give your listeners something familiar to relate to. On top of that, knowing the basic patch means you can manipulate it to get something new. For this tutorial, I’ll be breaking down a lead that was made popular by artists like Skrillex, Zomboy and Barely Alive.

I’m talking about the lead that plays the melody on THIS drop!

First of all, set oscillator 1 to a sine-triangle and oscillator 2 to either of the sine waveforms (with the Wt-position all the way on the left, it’ll be a sine anyway).

Then, transpose the pitch of each oscillator up an octave and down three octaves, respectively. It is the phase relationships between the oscillators that give the sound the character it has. 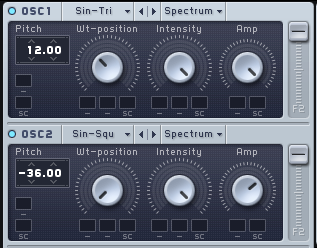 The sound we are recreating is sustained, so go to the amp envelope and turn the sustain all the way up. As I mentioned earlier, you can do many things to make this sound your own; one route to explore is simply changing the articulation using the amp envelope or an LFO.

In the oscillator (OSC) tab, enable restart via Gate. Although these oscillators aren’t detuned and shouldn’t really phase in unexpected ways, enabling restart via Gate is a good precaution to ensure a stable sound. In the VOICING tab, make the sound monophonic and legato. Making it monophonic is logical because the character of the sound is too aggressive to be played polyphonically. It will also prevent clicks – as will the “legato” trigger setting.

Add a little bit of AC Power noise, feedback and Parabolic Shaper. Used in moderation, the noise adds a nice texture and the feedback brings out the highs On the other hand, the Parabolic Shaper is the reason those sines actually sound like that.

At this point the patch already sounds like the lead in the example. However, there are a few more things we can do to make it more organic. Add some Ring Modulation to oscillator 2 in the modulation section.

Finally, add a Brauner Tube in FX1, with the dry/wet around 9 o’clock and the drive at 12 o’clock. This will give the sound more drive and body which is important because it can get overwhelmingly sharp without it.

In FX2, add a Dimension Expander. Since our sound is very central and mono, it could use some widening. But, we don’t want to put it out of focus, so it is crucial to turn the size almost all the way down.

That’s it for the basic patch, it sounds like this:

The patch we have is clean and powerful but it remains a little bland. What I mean is, the sound itself is an accurate replica of what we hear in modern Dubstep, but there simply isn’t much to set it apart. Here are a few things you can do to it to give it some movement and character.

Add a Scream filter with the resonance and scream around 12 o’clock and the cutoff around 9 o’clock. You won’t need Filter 2, make sure that the filters are set to serial. Then, assign Macro 1 to the filter cutoff.

Moving the cutoff of the filter will take the lead from a distorted low-register bass at low cutoff settings to the original screechy sound at higher cutoff settings. This gives us more control over the articulation of the sound.

Then, add an LFO to the amp of oscillator 1 and assign the same macro to it. Turn on the side-chain and make sure that the sign under the box you just inserted an LFO on is an “up” arrow.

By modulating the amplitude of oscillator 1, we are creating tension and making the sound less stable. Macro 1 will modify the range of amplitude that LFO5 is affecting as it synchronously affects Filter 1. The sound will become increasingly unstable as it allows more higher frequency content to pass.

5LFO should be a sine wave, moving at a synced ratio.

Now we can do this with our lead:

Finally, here is the lead in the context of a track: