Here is an analogy on a less abstract level…

If I were to start singing Twinkle Twinkle Little Star from the lyrics “up above the world so high”, it would still be the same song; except, “phase shifted” by one third of the total duration. Since phase is measured in “degrees” from 0 to 360, I might call the tune something like “Twinkle 120”.

In order to determine the phase degree, a reference waveform is necessary. So, you need to know where “0” is to measure phase degree. In my analogy above, the reference would just be the correct version of Twinkle Twinkle Little Star (starting at the beginning). The best way to convert this basic understanding into a valid, abstract internalization is to think about 2 sine waves*.

Compared to this sine wave…

This sine wave is 90 degrees out of phase (¼ cycle)

On the other hand, this sine wave is 180 degrees out of phase (½ cycle)

*The sine wave describes the simplest oscillation, one frequency – so simple it does not exist (audibly) in real life, only in electronics and theory. Sine waves are the “cells” that make up a sound. Every sound in the world can be broken down into its sinusoidal components.

A phenomenon describing the interactions between two or more nearly identical sounds performed simultaneously. It primarily affects amplitude (pressure or power). There are 3 types of phase interference…constructive, destructive, and comb-filtering.

Constructive: occurs due to synchronized phase relationships (0 degrees and 360 degrees). It causes the amplitude to multiply and sometimes resonate. In the electronic realm, producers often use constructive phase to boost frequencies. 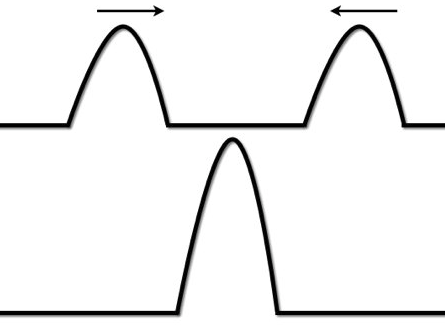 Destructive – occurs due to phase relationships of 180 degrees. Causes the waves to “cancel each other out”. In the electronic realm, destructive phase interference is used to remove frequency content from the sound. 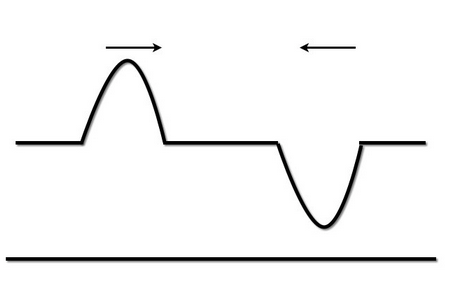 Comb-Filter – causes a series of alternating constructive and destructive “peaks and nulls” due to irregular phase relationships (between 1-179 degrees and 181-364 degrees). It accounts for the majority of interference. It is often used as an insert effect in electronic production and – because of the peaks and nulls – makes the spectrum appear “comb-like”.

A relationship between Distance, Delay Time, and Phase

Just about every surface, room, and an obstacle in the world reflect sound to some degree. Since reflected sound is a delayed, filtered copy of the incident sound (initial impulse), there is often phase interference when they collide in the air. This is problematic when placing microphones since most engineers want to capture the most genuine sound possible. It is nearly impossible to predict when and where phasing will occur in an acoustic space because the majority of organic sounds are very complex.

Theoretically, you can determine what type of interference (constructive, destructive, comb-filter) will occur at any given spot by comparing the position of the reflected waves to the incident waves. These positions can be found by calculating the time it will take each wave to arrive at the receiver (distance = rate * time), taking the difference, and translating that to a correlating “phase degree”. However, no math is necessary to minimize phasing.

Minimize Reflectivity in the Room. This will simply absorb the energy needed to cause interference. (see blog: Room Modes)

When recording with multiple mics, avoid placing them at related or “whole number multiple” distances from the source. For example,

LISTEN AND TWEAK. THIS IS THE MOST EFFECTIVE METHOD.

If you hear phasing, flip the phase of one input. If you still hear phasing, slightly adjust the position of the mic until you don’t hear it anymore.