The guitar needs no introduction – it’s an instrument used in most modern music genres. From pleasant and smooth, to harsh and abrasive, and everything in the middle, guitar sound can be colored in many ways. Different distortions, modulations, and other processors started to become of standard use as the electric guitar sound became known and developed. In recent decades, digital multi-effect processors have become quite powerful and capable of delivering very interesting results. With that in mind, in the next tutorial, we will show you how to use a multi-effect processor to polish your guitar riffs.

As usual, we will start by opening our SoundBridge: DAW. Let’s take a listen to this short sequence which contains most of the elements of a full mix. Focus on the guitar arp. 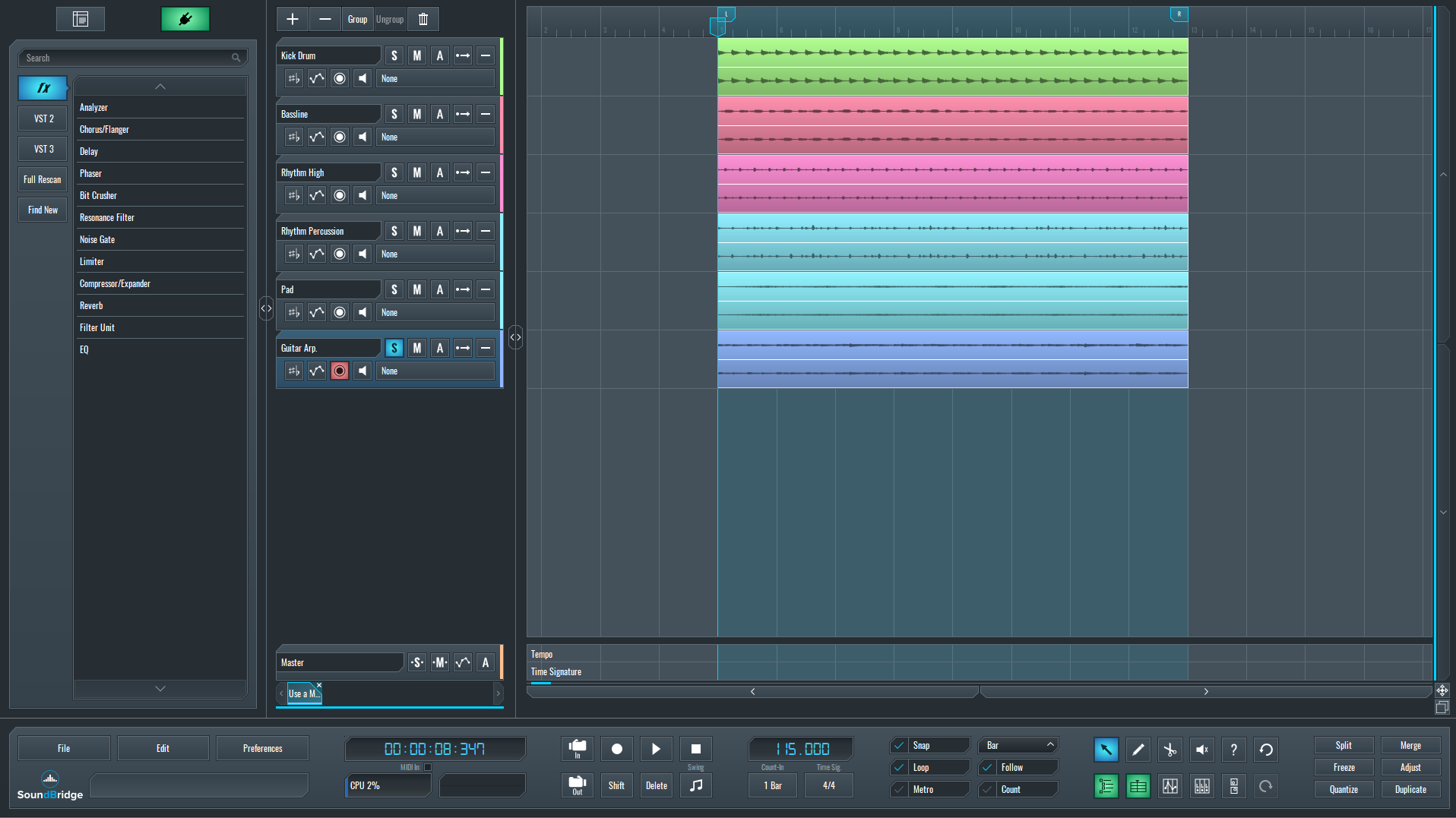 The guitar arp could cut through the mix better. This time, instead of using individual effects on the channel rack, we will simply choose a multi-effect processor. For the purpose of this tutorial, we have chosen the JJP-Guitars plugin by Waves Audio. Let’s start by adding it to our guitar arp channel effect rack. 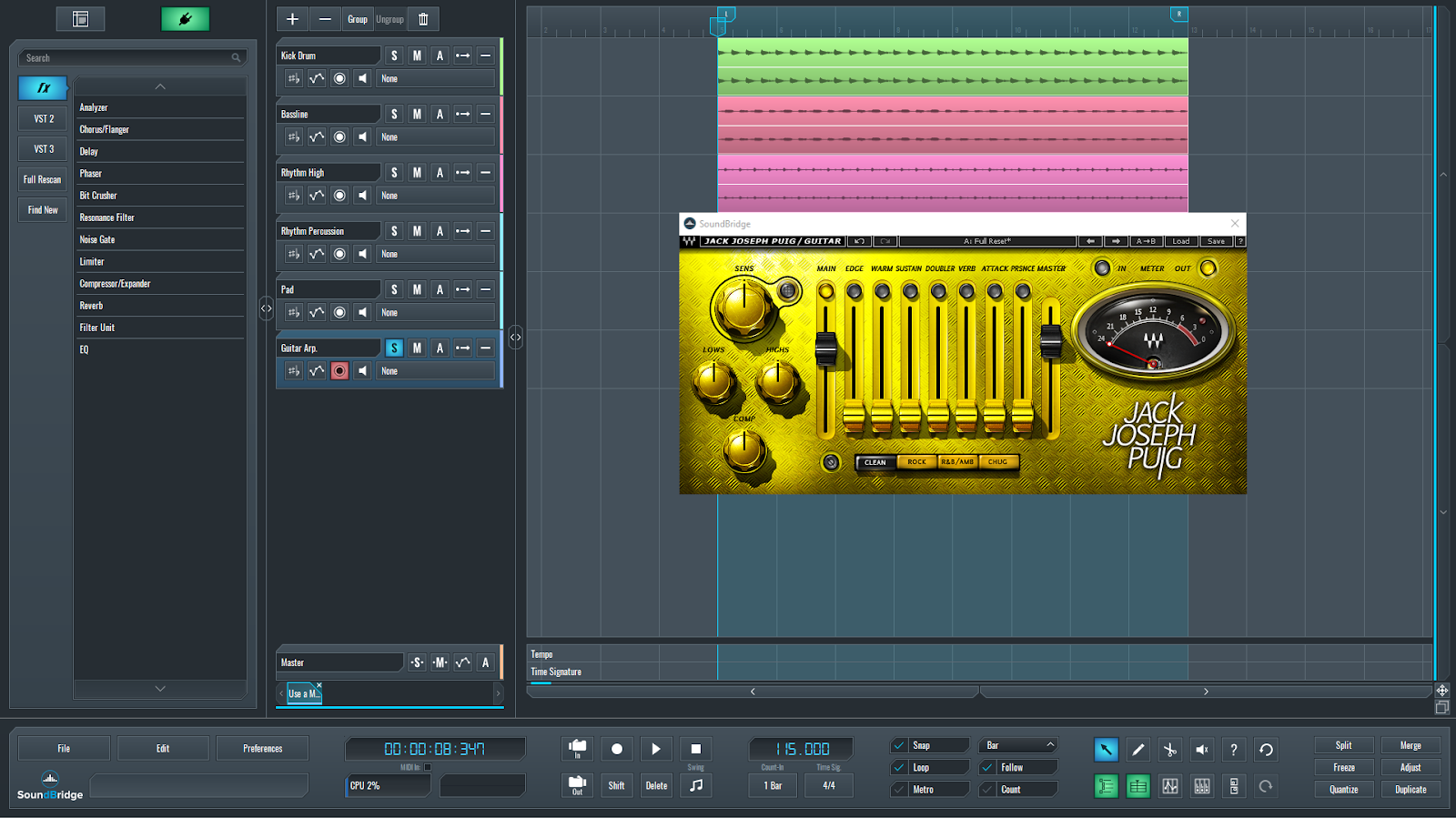 JJP Guitars has a very straightforward interface. On the left side, there’s a section with four knobs. The first of them is a Sensitivity parameter (Sens) with a small LED light that reacts to it. With green, yellow, or red light, it indicates that the level input hits the processor in such a way that the output result will be as intended. Below it, there’s a section that lets you control basic dynamics and EQ.

The middle part of the interface contains a set of faders in charge of different effects and volume processing. We will list all of them below:

On the right side of the interface, we can see the VU meter. Here, you can check the input and output values of the processed signal. Finally, at the bottom, there’s a set of “Types” that adapt the processing to a range of source materials: Clean, Rock, R&B, and Chug.

Now that we’re familiar with the JJP Guitars and its parameters, let’s process our guitar arp. 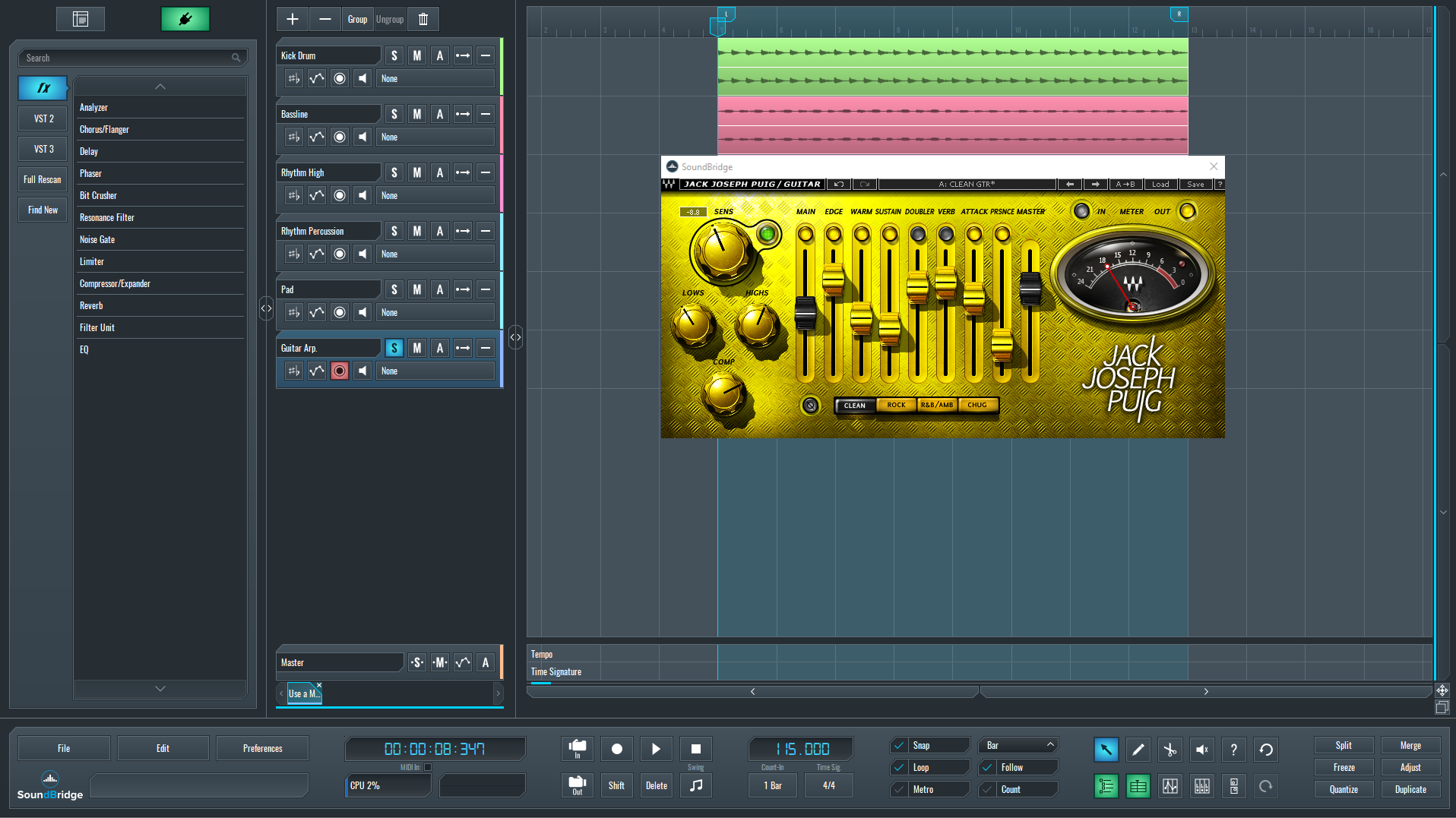 Polishing the guitar with the multi-effect processor

In this case, there wasn’t a need to go too wild with the processing since the original source material is an acoustic guitar. We adjusted the Sensitivity parameter to slightly hit the green light. With the main left knobs, we cut some of the lows, boosted high frequencies a bit, and introduced considerable compression.

The Main fader value was adjusted and set to around -15 dB. The Edge is set to a high value to provide for a nice and wide stereo sound. We have added just a bit of extra low-end with the Warm fader and used the Sustain processor to increase the body of the guitar sound. The Doubler and Verb effects were bypassed and considered unnecessary. We have increased the Attack parameter in order to emphasize the pick sounds. Lastly, we add to the Presence to increase the high frequencies.

Let’s now hear how our guitar arp sequence sounds before and after processing with JJP Guitars.

Now let’s have another listen to our processed guitar arp, in context with the other elements of the full mix.