Today, we’re discussing the unison effect. As some of you may know, one of the easiest ways to get ready-made sounds on a soft synth is to browse through its presets. You can take that a step further by adding external effects and understanding their processes and parameters. In this tutorial, we will show you how to turn a simple preset sawtooth-based lead into a much more powerful sound. We will do this by using the unison effect.

Let’s start by listening to a simple pattern in our SoundBridge: DAW. 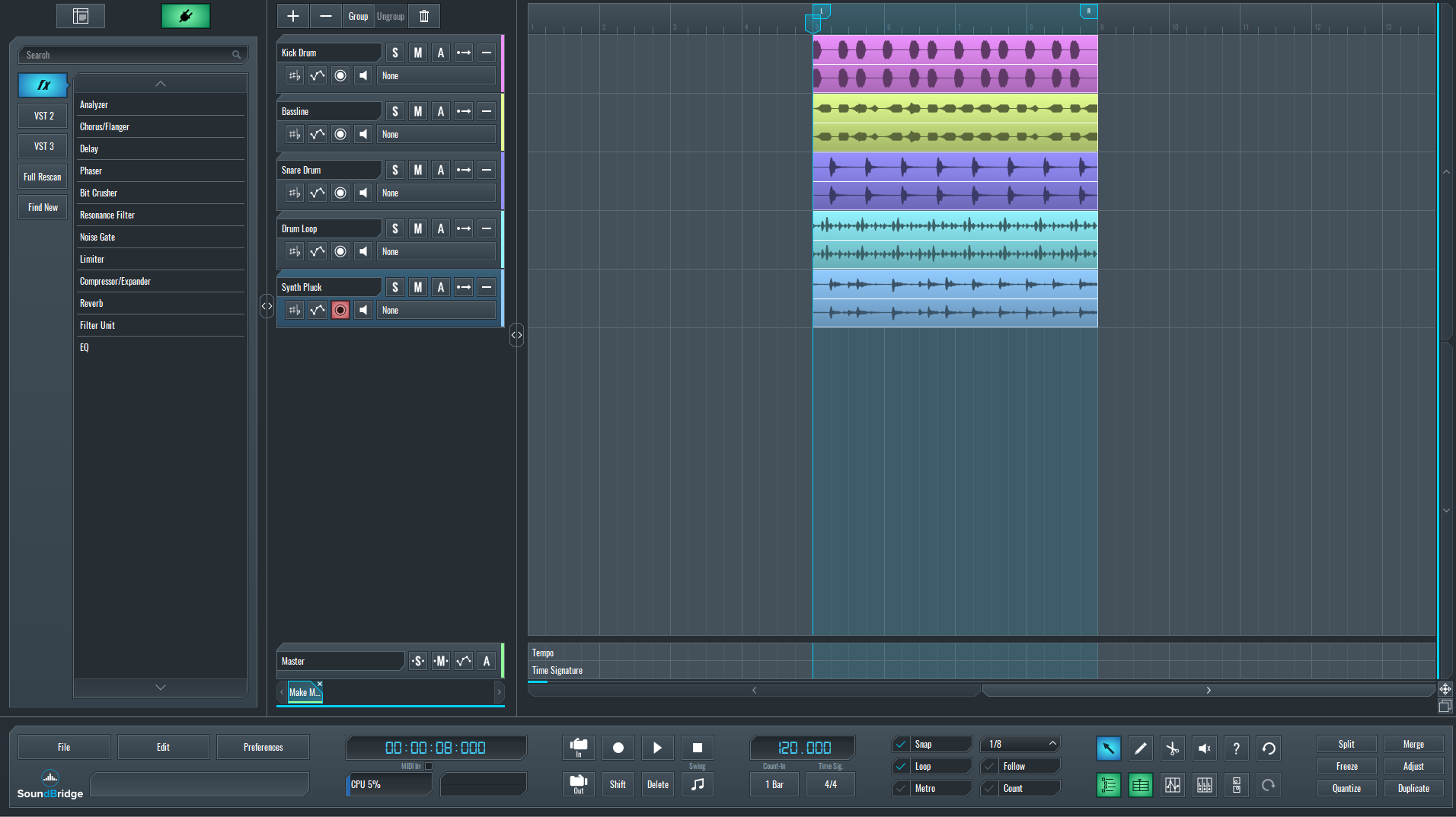 As mentioned, we will add a chord progression using a simple sawtooth waveform. Let’s hear it without any processing.

As we can hear from the audio example, our synth sounds quite dull. It lacks depth, movement, and many other things. We can drastically change that by applying the unison effect. First, let’s get familiar with the effect itself.

The unison effect happens when we multiply the number of original voices of an incoming sound if we are using a synthesizer. Those voices would be generated by additional oscillators. Then, it’s possible to detune each voice independently from each other. With certain settings, this will create a much bigger and wider sound than the original. Old hardware synths offered this option since they were capable of reproducing two, four, or eight times the number of original voices. Technology has developed a lot since then, and nowadays those numbers can be much higher. Several software plugins are good choices for this task. One of them is MUnison by MeldaProductions.

Let’s start by adding a fresh instance of this plugin on our synth chord sequence channel and getting to know its most important functions. 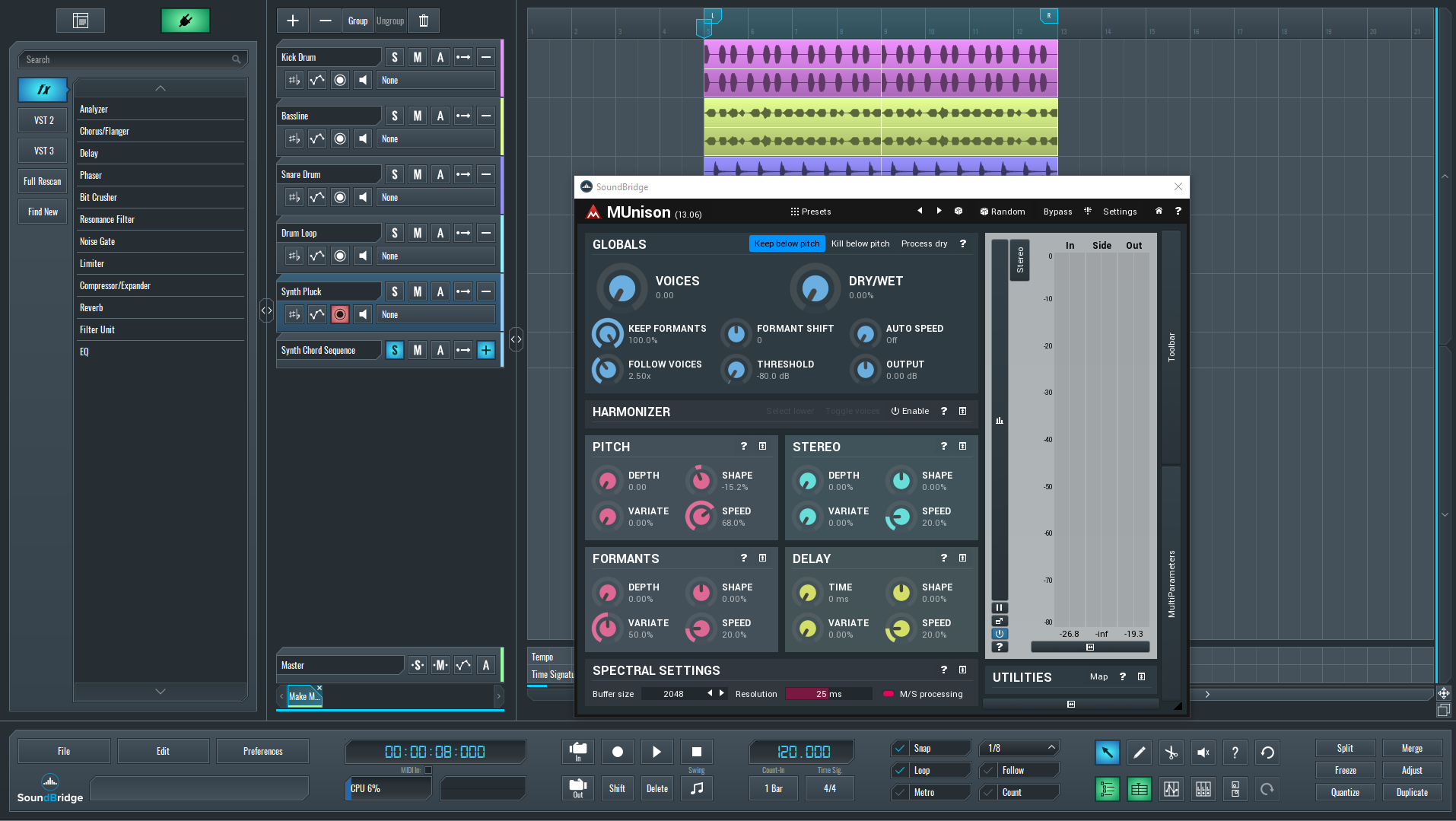 MUnison is capable of capturing and analyzing the pitch of an original incoming signal and generating extra virtual voices on top of it. The upper part of the interface has two big knobs, one of which determines the number of virtual voices, from 0 up to 50. The second knob is the mix between dry and wet signals. Below that, we have the “Keep Formant” and “Formant Shift” parameters, which reduce or increase the altering of the spectral envelope. “Follow Voices” controls how much other parameters follow the number of voices. The “Threshold” defines the minimum input level at which the plugin generates additional voices. Finally, the Gain or “Output” defines level increase applied to the output signal.

The lower section of the MUnison has four different panels. Those are Pitch, Stereo, Formants, and Delay.

Now that we’ve become familiar with the most prominent parameters of the MUnison, we can start processing our chord progression. Let’s have a look at how we set the parameters up for this task. 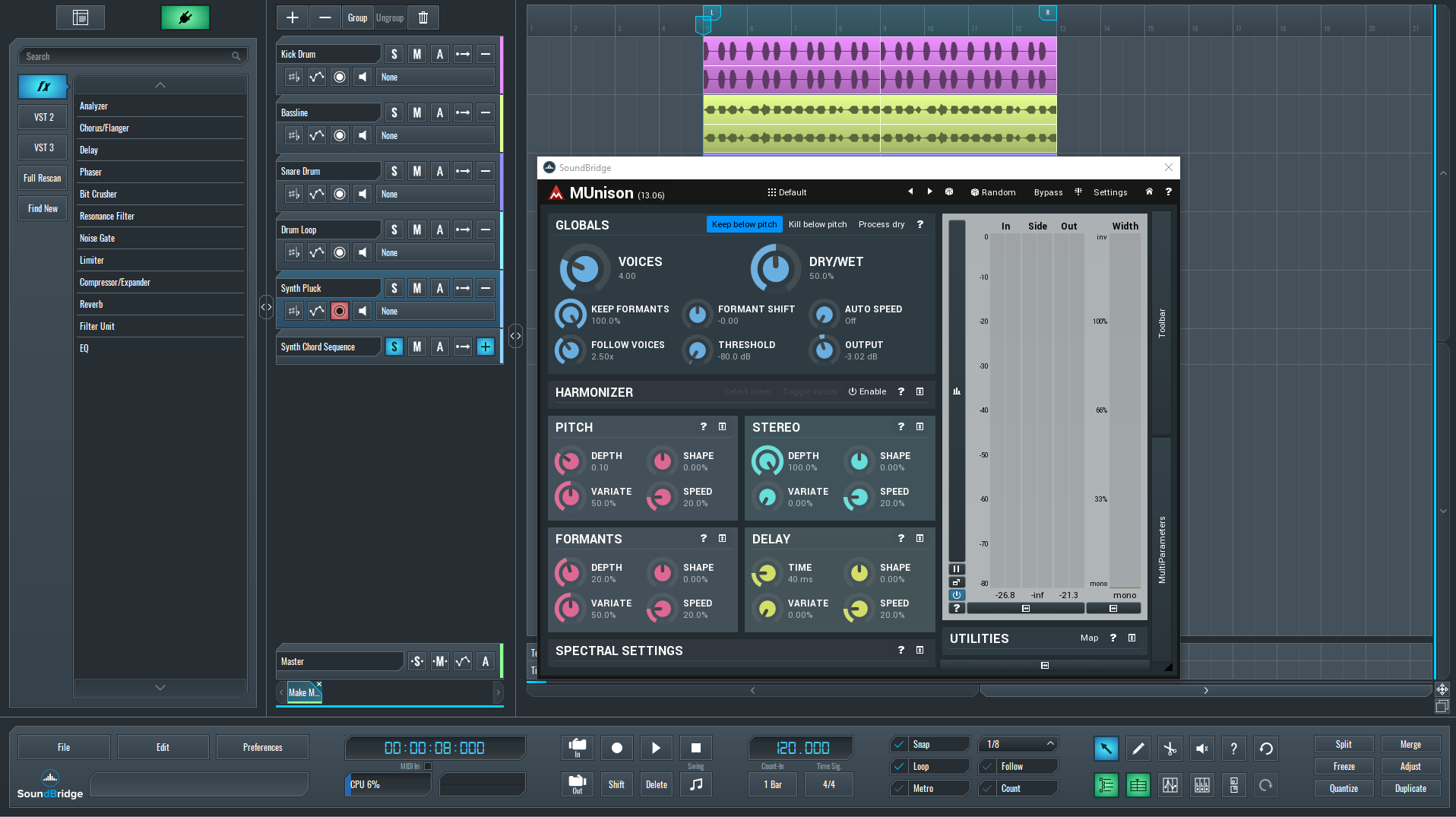 Processing for the unison effect

In this case, we feel that an additional four voices would be enough, followed by a 50% setting on the Dry/Wet mix knob. Keep the Formants parameter is set all the way up to 100% since we want to preserve the characteristics of the original signal as much as possible. Follow Voices is set to 2.50x, while all other parameters in this section are off.

Let’s now compare the unprocessed and processed version of our synth chord sequence.

For a better chance of hearing the dramatic effect of this type of processing, let’s listen to the unprocessed and processed synth chord progression with the other elements of the mix.