Prismizer is an audio effect which is in some sense similar to the vocoder. Like vocoder, it also combines pitch and frequency characteristics from multiple sources. Similarly, its primary use is pointed to the processing of the human voice. On the other hand, it uses multiple audio codecs and what distinguishes it from vocoder is that it uses mentioned pitch and frequency characteristics to achieve a different, choral effect. The name of it combines from two words, prism and harmonizer. Its polyharmonic pitch provides saturation akin to the dispersion of light to a prism. Harmony engine plugin by Antares incorporates this effect.

Antares Harmony Engine plugin appeared on many albums. However, the ‘Prismizer,’ which references a specific configuration, debuted on the Chance the Rapper mixtape Coloring Book. You can hear it on Frank Ocean’s sophomore album, Blonde, the Bon Iver album 22, A Million, and Farewell, Starlite!, the debut album of its inventor, Francis Starlite of Francis and the Lights. Consequently, Chris Messina developed the live instrument version of the Prismizer. For this reason, it is known as “The Messina”. The Messina isn’t an instrument, but rather a laptop running the “Prismizer” connected to a MIDI controller with some other form of outboard gear.

Today, synthesizer effects are ubiquitous in an industry where engineers are becoming essential deputies for forward-thinking musical artists. And they’re only getting more and more advanced. In 2017, James Blake used a vocoder throughout The Colour In Anything, and both Frank Ocean and Chance the Rapper used a device called a Prismizer for their projects, which has a similar cloning and disseminating effect; it allowed Ocean to literally have “two versions” on Blonde.

Francis Starlite of Francis and the Lights perfected the method of reaching bright polyphony sounds without using a vocoder or Auto-Tune. It works like the light that passes through a prism area and, naturally, splits into a color spectrum. Something similar happens with the vocals — it is not monotonous, but scattered and voluminous, giving a choir effect to the sound. Chance the Rapper spoke on Prismizer in an interview with Zane Lowe after its debut on Coloring Book. 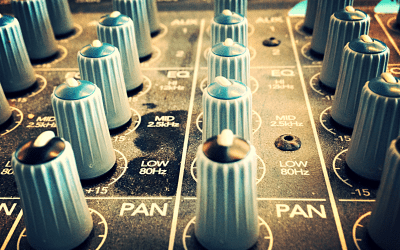