So you have a verse or a chorus and some introduction to it. Now you need another section. There’s not much time so you can’t start from scratch, but you don’t want it to sound repetitive. Luckily, making variations and arranging musical phrases in SoundBridge is easy. With these compositional techniques and tools, you can generate possibilities for a new section or development on-the-fly. Here are eight tips on developing and arranging new material from existing ideas. 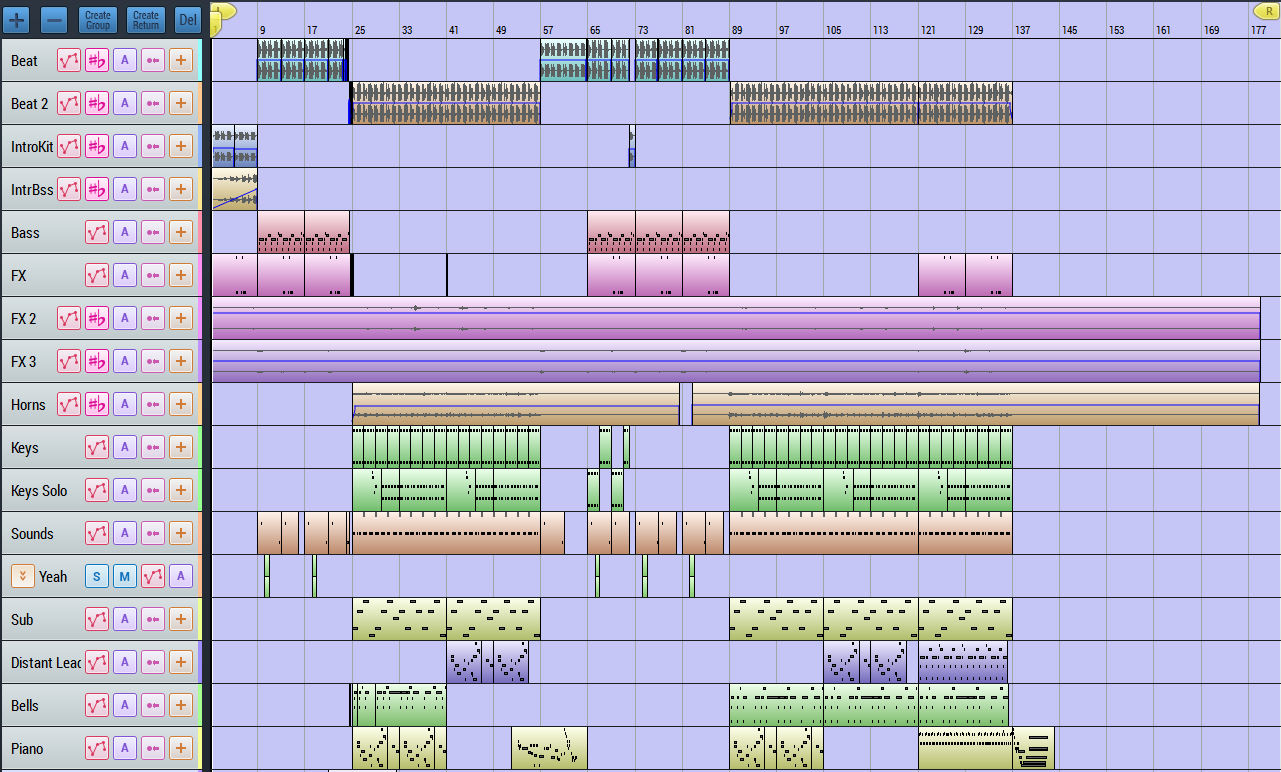 1. Hint at a Previous Phrase

First and foremost, your first idea is precious. This is because it is the most genuine attempt you will make throughout the production at expressing what you want. Besides, it provides the starting point for all ideas to come. So when you’re thinking about how to generate a new section, instead of wasting time making something entirely new, consider using the same idea in a different context. In my example, I took the phrase my bass was playing and turned a slightly modified version of it into a part for the next section. For variation, try using techniques like transposition, inversion, retrograde, and augmentation. Or, just remove, move, and add a note or two. This modification can either be performed or created by editing a duplicate of your first idea. It’ s up to you.

This one is pretty self-evident. It is difficult to make a new section of a song without adding some new elements to it. With that being said, it is easy to over-do it too. I would recommend adding only one new element in focus. Any other additions should be some sort of accompaniment. By “new element”, I mean something that is both a new timbre and role rather than a new timbre that has realized or substituted an existing idea. In my example, I added a piano in focus, two organ parts as accompaniment, and a horns section to accompany the bass.

Often, you need the role that a certain instrument is playing to be fulfilled, but you’re sick of that timbre. This is where substitution comes in handy. Take my bass for instance. I need those powerful sub frequencies to be in both the verse and the chorus, but I don’t want the same timbre or notes as the first section. So, I created a sub-bass in FM8 to take over the role of occupying that frequency range. I also substituted the sub kick drum for a different sample and a piano for a bell-like sound on certain repetitions of the melody.

~ bells take over the piano roll

The most obvious and effective harmonic contrast is the modulation to another key. This is a technique that has been sort of pushed aside by modern production. I would not recommend modulating to an unrelated key for this type of music, but perhaps a related key will work. The critical task is to make a new harmonic progression, a new set of chords that are formed by the simultaneous sounding of multiple tonal instruments. One easy way to satisfy harmonic contrast is to spare one section of much harmonic content and save it for the next section so that when it comes in it is more moving and exciting.

In my example verse, I kept an ostinato as the main instrumental element, a phrase that hangs around one chord (the bass). I stuck with more spacey abstract sounds as accompaniment rather than layering harmonies over it so that when they enter in the chorus, that depth is fresh and relieving.  It is also essential to provide some contrast between the rhythmic aspects of the sections. For instance, if your overall groove is more staccato in the verse, try legato for the chorus. If your phrases are more melismatic in one section, try something more syllabic for the next section. In the audio example below, you’ll hear my articulated ostinato turn into a set of chords in a simple harmonic rhythm.

If you have a few different ideas developed already, that’s probably enough for the whole song. But that does not mean you can’t make more material. You can still lengthen the song by hybridizing sections and ideas. Maybe you’ll take the accompaniment from the verse and listen to it over the melody from the chorus and the groove from the bridge. Or perhaps you’ll play the melody from one section on a different instrument over some drums from the verse.

This technique works on a more micro level too. You can make a phrase that is a hybrid of the melody and a background part or sound effect. I would suggest adding one new harmonic idea to the hybrid section somewhere low in the mix to keep things interesting. In my example song, I put my hybrid section at the end. They often sound nice after the last chorus of a song. I took the ostinato from the verse (which is also a melodic theme in the chorus) and played it on a different instrument over the drums from the chorus and the accompaniment from the verse.

~ verse and chorus fused into a hybrid section

A lot is good sometimes. But a lot can only be fully appreciated after having experienced very little. This holds true when developing music. It is important to give you and other listeners a break from having to compartmentalize a lot of elements. Typically, the chorus or drop has the most elements in it. The verses and bridge are more sparse, allowing the listener to recharge and understand where they are in the song. This does not mean you should skimp on the details of sparse sections. In fact, they are often more dynamic and detailed than the dense sections.

7. Use a New Instrument as a Segue

This is a transition tip. A technique you might use to segue into and out of a section. The entrance of a new focused instrument is almost always followed by a new section, lead by that new instrument. In my example, I used a piano to transition from the end of my first chorus into the bridge section.

~ piano segues into the new section

This is perhaps the most effective way to add freshness to a new section in electronic production. SoundBridgeand other DAWs make it so easy to create duplicate tracks with new processing, edits, and automation. I used this technique on the drum loop for my chorus. I copied it to a new audio track. On that track, I dropped a high-pass filter at around 150 Hz to cut out the sub of the kick drum in the loop. Then, I replaced the role of the sub-kick with a Battery 4 sample. After that, I sent the filtered drum loop to a return track with a band-pass filter followed by a sixteenth note delay and a stereo imager. Additionally, I blended this affected signal with the filtered original and the new sub-kick to form a uniquely processed loop. If you had any side-chain signal coming from the original loop to instruments in this next section, be sure to change the key input to the new drum loop.