The world of EDM seems to be spiraling into a vortex of growling basses and screechy leads. And, although you should look for ways to diversify and find your own voice, it’s helpful to understand how some of these popular sounds are created. In this article, I’ll be going over Skrillex’s Badman lead and showing you how to recreate a similar patch.

We can play any notes with the finished patch; but, when trying to recreate a sound, it’s usually a good idea to use the same melody as the reference track. This is the easiest way to identify differences in the timbre or articulations.

The track is in the key of F minor. But, since the lead is so textural, the notes don’t really adhere to the key. They serve more as approach and neighboring notes, adding variation and movement to the sound. 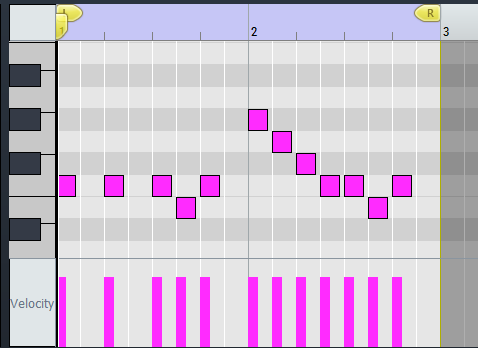 Now that we have MIDI comparable to what Skrillex may have had, it’s time to actually recreate the sound. First off, go to the amp envelope (4 Env) and turn up the decay time, sustain level, and release time.

Then, change the oscillator waveforms to Formant Square, and Carbon respectively. Route both oscillators to Filter 1 exclusively and transpose the pitch of oscillator 2 up an octave. Make sure you assign Macro 1 to the wt-position and intensity of OSC1 as well as the intensity and amp of OSC 2. The articulation is going to come solely from modulating macro 1. Macro 3 can be assigned to the amp of OSC1 to create a variation in timbre of the sound. 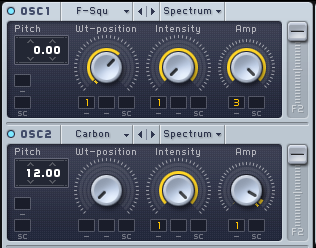 Set Filter 1 to a double notch and Filter 2 to daft. Bring the Ser-Par fader all the way up to serial and assign the macros to the parameters shown in the picture. Macro 2 is what will give the sound its throaty quality. We won’t be modulating it – so, you can move the macro to a static position you like. In this tutorial, I set it at 3 o’clock. 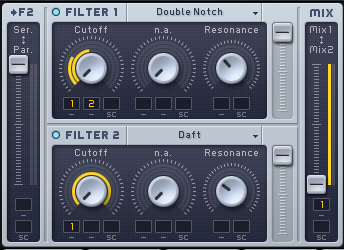 Phase modulation plays a huge role in this sound. Set the pitch to +42 semitones, and set it to modulate the phase of oscillator 1. Then, assign macro 1 to the phase knob and turn its range up to somewhere between 9:30 and 10 o’clock.

Add a parabolic shaper to Insert 1 and set both the dry/wet and drive to 12 o’clock. This will distort the sound and give it the prominence it needs to take center stage in the mix.

Then, more distortion! In FX1, select the Brauner Tube and turn the drive and dry/wet to about 11 o’clock.

And in FX2, add a Dimension Expander with the size all the way down and the dry/wet to 3 o’clock.

By assigning Macro 1 to the dry/wet of the Dimension Expander, the effect will create an impression of stereo width or size as the sound opens up with the automation.

Finally, in the voicings tab, add a second voice. Detune and pan the voices. This will widen the sound and make it even more prominent. Since it will only be layered with a sub, it has a lot of room to breathe and we want to make sure that it occupies as much of that space as possible.

We’ve added a lot of distortion to the source, so we have to think about gain staging – we don’t want the patch to clip. Make sure you turn down the master volume in Massive to avoid this issue!

If you’ve been playing the melody with the patch as you were creating it, you probably realized that it doesn’t sound anything like the synth that we are recreating. The reason for that is we haven’t applied any automation yet. All the parameters linked with macro 1 will move as we automate it.

To do this, open the instrument rack in Lumit and click ‘read’. When you move Macro 1 in Massive, it will come up as an option for automation on the rack module. A respective lane for recording the automation will also appear under the track.

Then, back in the sequencer, click on ‘A’ to open up the automation channels and draw in this automation for Macro 1. It should move from bottom to top as the note is playing. Now, if you play it with the melody we drew out earlier, it’ll make more sense.

In a full production, this lead would probably be layered with a sub and some drums. Here is the patch we just created with some other elements!