Setting the right stereo image in modern music production has become a technology by itself, a really complex one I might add. From TV audio productions, gaming audio and all the way up to electronic music genres, the stereo image of the final sound product is one of the tasks to which audio engineers and producers dedicate close attention. Indeed, the modern era of software tools brought us many advantages, and today, there is an array of different software plug-ins aimed for controlling the stereo image of the audio signal. For this reason, in the next tutorial, I’ll walk you through the MStereo Generator by Melda Productions.

In order to make a mono signal appear stereo, we must create some inequality between left and right channels in volume, time and frequency response or a combination of both. By doing so, we mimic processes which happen around us each time we hear something in nature. The mentioned plugin covers all of the mentioned tricks.

MStereo Generator is a natural-sounding stereo generator. Its purpose is to widen and bring closer monophonic tracks or just to improve the stereo image of stereophonic tracks. In principle, MStereo Generator creates a tiny artificial space, similarly to reverberators, but with tiny dimensions, so that it shouldn’t interfere with the existing spatial image.

It is entirely mono compatible, of course. The plugin has been designed to sound as natural as possible and alter the spatial position as minimally as possible. The base trick of this plug-in is that it adds a very short ambiance to an incoming signal.

So let’s start this tutorial by adding a new instance of MStereo Generator to a newly created channel within Soundbridge. 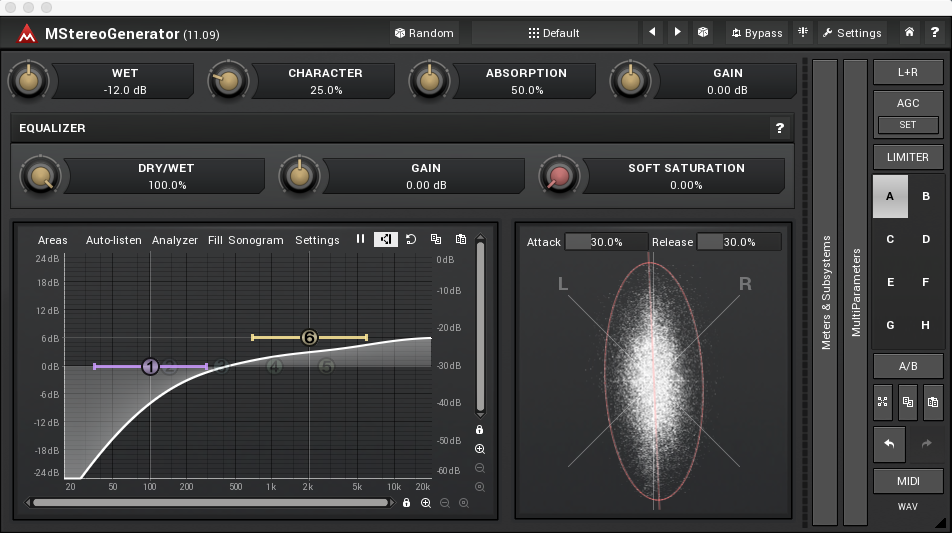 Now, let us cover MStereo Generator’s main parameters before we jump to the audio examples.

Wet– Sets the level of the effect

Character – Controls the time of an ambiance

Absorption – Responsible for the decay shape

Gain – Controls the overall volume of the output sound

The second row of parameters belongs to an equalizer. Additionally, it treats the wet signal only, and it is beneficial for shaping the effects frequency response.

On the right side of the interface, we can see the Goniometer. It is a very useful tool when dealing with similar plugins. Furthermore, it is crucial to keep an eye on it when setting up the mentioned parameters. The general rule of a thumb would be that the outward brown line shouldn’t be wider than a presented circle. If it is, then it means that the amount of the signals in anti-phase, higher than signals in phase in the left and right channels. Consequently, that can cause a problem.

After the initial introduction, let’s hear this awesome plug-in on two different sounds. The first would be an acoustic drum loop and the second a short acoustic guitar riff.