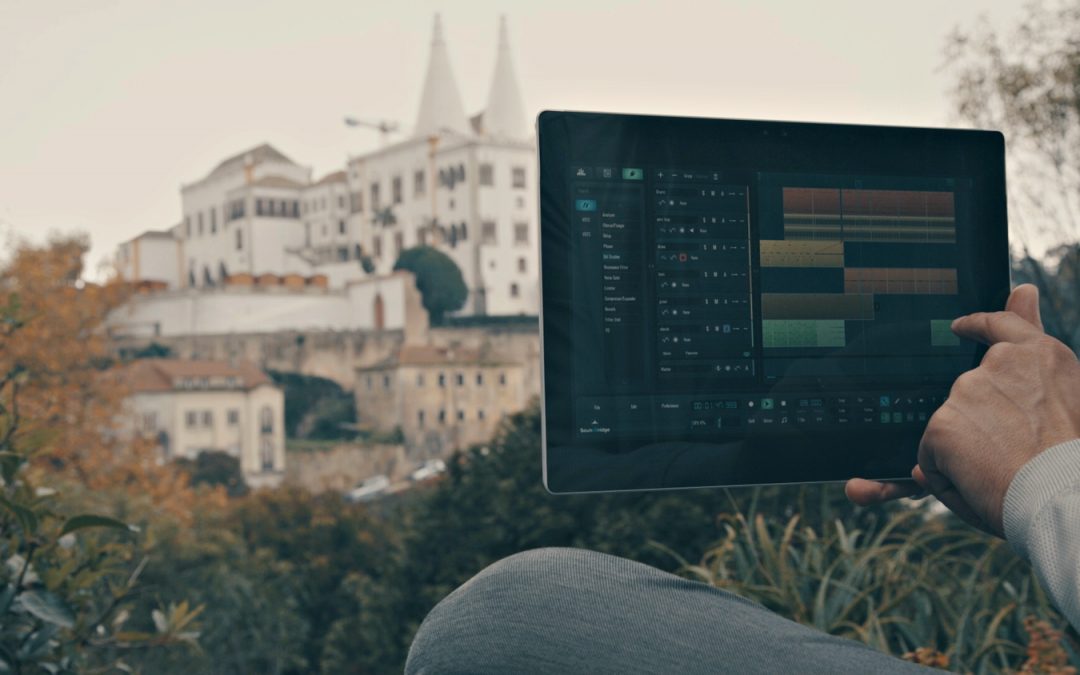 One of the most time-consuming audio processing and mixing tasks is surely the taming of harsh vocal and instrument frequencies. Traditional processors such as EQs, de-essers, and compressors are common to tackle this. However, in recent years, we have witnessed the rise of new and fascinating tools that combine the power of all of them. In the next tutorial, we will show you how to use one of them: a resonance suppressor.

As usual, we have prepared a short pattern in our SoundBridge: DAW. It contains most of the elements of a full mix. Let’s have a listen.

As we can hear, the guitar harmonic sequence has many dominant resonances that make the overall frequency spectrum of the track overwhelming. This also pushes all the other elements in the mix into the background. Additionally, some of the high frequencies in the rhythm section are kind of rough and could be treated.

An alternative and modern approach to solving this is to use something called a dynamic resonance suppressor. Coming from a fairly new line of similar tools, dynamic suppressor effects integrate equalizer, compressor, and de-esser into one unit.

In our case, we chose an effect called Soothe2 by Oek Sound. Nonetheless, there are more alternatives out there that you can check out. Let’s start by placing a new instance of it on the guitar channel.

Although the GUI looks like it, Soothe isn’t an EQ. Instead, “EQ-like” controls have been commissioned for intuitive control. Soothe 2 comes with six bands, or “nodes,” as they call it: high pass, low pass, and four parametric bands.

When you pick each node, corresponding controls at the bottom of it will appear. The resonant suppression increases by turning up the “Sens” control and thus, eliminates the harsh resonance for that particular band.

In the same area, we can see a number of other controls. The most noticeable of them is “Depth”. The Depth knob acts as the core control on how much of the total processing should be applied to all boosted nodes.

Two options for modes of processing can be found just above the Depth knob. These two modes decide how the audio will be influenced by the Depth control. Each category is quite self-explanatory.

“Sharpness” and “Selectivity” expand on the Depth control and help dial the optimal level of suppression. In the former higher values will allow for narrower notches, and lower values will work for more of a broadband control. The Selectivity control makes this plugin act more natural and less surgically on lower values, while higher values suppress the most resonant of the frequencies only.

The attack and release functions are identical to that of a compressor, allowing precise tweaking of when the suppression snaps and tames, and when it releases.

After this brief introduction of Soothe2 and its main controls, let’s compare how our guitar sequences sound before and after processing.

Now that we’ve dealt with our guitar, let’s move to the drums. In this case, there is no need to apply such drastic processing, so we will choose the “Soft” mode, which is enough to reduce harsh resonances of the hi-hat and some of the drums which seem too punchy. Let’s have a listen to the drum group before and after processing.

Lastly, let’s have a listen to the full mix with the unprocessed guitar and drum group, and then with the suppressor effect added to both.