The name “celesta” derives from the French term céleste, meaning “heavenly”. After multiple experiments, the celesta appeared by the end of the 19th century and quickly found its place in the orchestra. It’s an interesting instrument with a dual character. It produces sound like a percussion instrument, but performers play it as a keyboard. Celesta compositions are mostly lively, and because of that, they require a certain degree of virtuosity.

In 1788, the Irishman Charles Glaggett invented an instrument called an “aiuton”. Its tone was sweeter and warmer even than that of a glass harmonica or stringed instrument.

Glaggett mounted a series of tuning forks or metal prongs on a hollow box to generate this sound. They were struck by tiny hammers operated by keyboard keys. The instrument had a three to six-octave range and never progressed past the developmental stage. A hundred years later, during the late 18th century, the intention of achieving a timbre that was as smooth and warm as possible, but could still hit a satisfactory volume eventually led to the development of the celesta. The harmonium manufacturer Auguste Mustel developed the first known design of celesta in Paris in 1886.

The first celesta part for orchestra can likely be attributed to Ernest Chausson in 1888. Pyotr Ilyich Tchaikovsky first heard the instrument in Paris and immortalized its sound in The Dance of the Sugar Plum Fairy, in 1892. In ballet and opera, the celesta has always been evocative of the romantic, the imaginary, the enigmatic, the lustrous, and the dream-like.

Construction of the celesta

The celesta looks like a harmonium. It consists of a case with a keyboard and pedal. The case contains the metal bars, the resonators, and the complicated striking mechanism. Steel bars over hollow wood resonators that sit on felt rails generate the primary sound. Felt-covered hammers attached to a keyboard by means of a complicated mechanism hit the steel bars.

Unlike the piano, the celesta’s hammers vary in size and weight. Larger hammers with a thicker felt covering strike the lower notes, which results in a particularly warm and rich timbre. This mellowness in the lower register is one of the celesta’s most cherished qualities. The resonators sit below the metal bars and correspond exactly to the pitch of the bar above. They serve to amplify the fundamental and resonance of their particular bar. These resonators, especially the larger ones for the lower notes, require a lot of space. For this reason, they’re arranged in two rows, one above the other, with their corresponding metal bars.

To preserve a consistent timbre, the pitches over the entire range spread over both rows, rather than the lower register being below and the upper above. The damping pedal works in the same way as on the piano: it raises the dampers and allows the notes to resonate.

The playing techniques for the celesta are the same as those of the piano and range from single notes to typical figures, rapid scales, glissandos, arpeggios, tremolos, octave tremolos, and chords. All these figures are very effective when played legato. 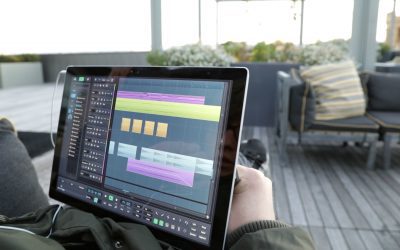 Separate the Elements in the Full Mix by Using UNMIX::DRUMS