In Part 1… I talked about three specific areas of electronic production that are often lacking in demos submitted to myself and EDM labels. It is impossible to fit a comprehensive list of every issue producers encounters into one or even several articles. I will, however, continue my general discussion on techniques that can implement drastic improvement to your overall production. If you’re already familiar with these tips, they can still serve as a useful reference before submitting a mix.

In past articles, I have heavily emphasized the role that a sub plays in EDM tracks. To put it simply, the low sub frequencies move the most air and cause the most vibrations in a club. This is, in essence, what differentiates a live DJ performance from listening to their songs on a consumer system or headphones.

What is a sub?

Sub refers to an instrument rooted in subsonic frequency content. The instrument is essentially a sine wave, usually playing the root of the harmony or melody in a register below about 100 Hz. Since a sine wave only contains the fundamental of a tone, it won’t conflict with mid and high frequencies.

In Massive, you get a sine wave by switching an oscillator to the Sine-Square setting and moving the wavetable position to the left-most position.

Below is a graphical representation of this sub oscillator playing note G-0. As you can see, there is a sharp decline in the level of frequency content above 100 Hz. 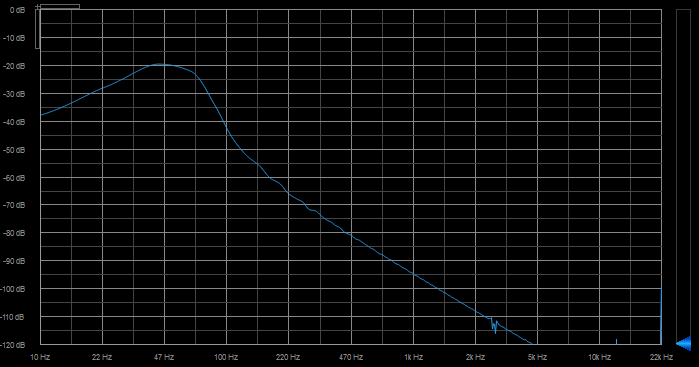 Splitting the Sub and Bass

Bass instruments in many popular EDM tracks seem to have a wide stereo spread, but the frequencies below 100 Hz are not responsible for this. Those frequencies should remain monophonic because of the high potential for interference. Instead, you can expand the image by layering something on top of the sub and widening that layer. You should high-pass filter it above 100 Hz to make sure it’s not conflicting with the actual sub. Together, the two layers give the impression that the whole bass is wide.

An important advantage of splitting the bass and the sub is the ability to process the top layer more extensively without damaging the clarity of the sub frequencies (below 100 Hz). You could add a layer of audible grit while retaining the frequencies needed to give the track a solid presence in a live setting.

This instrument is made up of two layers. The first is a mid-bass layer I made in Massive and the second is a simple sine sub playing a G-0. The top layer has two voices that are slightly spread and detuned to widen the sound further.

As you can hear, the full bass sounds wide even though the sub is mono. In general, keep frequencies below 100 Hz mono and central.

~ Here is a sine wave in Massive playing a G0. This is an optimal note for the sub.

In order to have a mix that sounds compact and tight, you’ll have to make good use of meters and other tools that give you visual representations of your mix.

When you pan channels in different directions without justification, you increase the chances of having an unbalanced combined output. This can cause problems when you have the master or group effects (effects inserted on a stereo mix) that process the left and right channels individually.

The best way to judge if your left and right channels are balanced is by looking at the built-in meters. It’s a no-brainer. The two green bars represent the left and right channels, respectively. Keep an eye on individual channel metering, but most importantly, on your master channel. The image below shows that the left channel is significantly louder than the right one in my mix. If you’re sustaining a reading like this on your master channel for more than a moment, you should have a look at your individual channels and fix the offset.

With regards to other widening techniques like pseudo-stereo or mid-side processing, you should take extra care as these can also create asymmetrical stereo images. Also, these techniques often reduce mono compatibility, which will affect the mix in a live setting (club systems are always mono). Summing left and right to check for mono compatibility is a critical task for any mixing engineer. A mix that sounds good in mono will naturally sound better and wider in a stereo setting. Not the other way around.

You’d have a problem if your lead would sound like the one in example 2. This is because different voices of the synth phase in ways that cause certain frequencies to be multiplied and others to be attenuated or eliminated. So, mono compatibility is an important step to get into the habit of checking. For more information on how to treat phasing, visit our article on Healthy Phase Relationships.

Note that the reason sub frequencies are kept mono and central is mono compatibility issues. This way, if anything is distorted on a summed live system, you know it’s not the sub!

As you start paying more attention to level meters and analyzers in your DAW, you’ll realize how volatile they are. Often times, signals that sound like they are at a consistent volume are actually fluctuating a lot. When a mix is brought to mastering, too much variation in level will cause the limiter and compressor to work harder then they should have to in certain parts of the arrangement and not work hard enough in other parts. When too much signal is fed into these plug-ins, they will distort. And, the only way to properly mend this distortion is by adjusting the overall mix, which the mastering engineer can request if he/she desires. If you want more information on why it is important to stabilize the levels of your different channels, you can check my article Maximizing Loudness.

To demonstrate my point, here is a processed snare followed by the original. The two sounds are outputting at the same level in Lumit, but the first one sounds louder than the second. This is because a freeware saturator and a compressor/expander are processing it. What I’m trying to show is… at the same level reading in your DAW, there is still a margin of how loud the sounds are perceived. Because of this, it’s important to keep the level in SoundBridge as consistent as possible. You can get pretty far with that before you actually start damaging the sound.