The structure is an often overlooked but significant aspect of EDM tracks. It can tell us whether a track is more likely to be featured in Clubs or on the radio. What’s more, depending on how the producer approaches it, the way a track is structured can be enough to make or break a DJ’s set.

Transition effects are key elements of electronic music. They facilitate the transition (as the name suggests) between different contrasting sections of a song. All in all, a successful track is one that transfers energy seamlessly between these sections. Good use of transitional effects is central to this. So let’s create some white noise sweeps, pitch up and pitch down effects, and see how we can incorporate them into our track.

White noise is noise containing all frequencies at equal intensities. For its purpose as a transition effect, this is important. It means it will be easily distinguished when mixed with other elements in our track. For this tutorial, I’ve created a white noise sweep in Massive. Keep in mind, you can make it in any synth that contains a noise generator.

After loading up an instance of Massive, the first thing to do is turn off all of the oscillators and switch on the noise generator.

I chose the bright setting because it feels very smooth in the brighter colors. I placed macro 1 on the color and amp knobs. This will allow me to control multiple aspects of the sweep with one knob.

Next, I set the filters to serial and inserted a bandpass filter. I increased the bandwidth and added some resonance. With macro 1 on the cutoff knob, this will emphasize the sweep.

Next, I added a little Chorus to widen the sound and make it less static. However, I kept the depth all the way down to prevent too much movement and keep it from becoming too prominent in the track.

Finally, I  lengthened the attack of envelope  4 and set the sustain level to maximum. This way, we get a constant sweep that will last as many bars as we need it to.

That’s all you need for a basic white noise sweep patch. Of course, you can play around with the different settings to get a sound that works better with the tone of your track.

This is how the sweep sounds out of context:

Pitch up effects serve the same purpose but have a different impact on the track because, unlike white noise, they are tonal. They create tension by rising in pitch and, hence, are used to lead the track into new sections – rather than before and after like white noise. Like the sweep, I’ve created a pitch up effect in Massive:

The first thing I did was to send all of oscillator 1 to Filter 1 and move the wavetable position on the default Square-Saw wave to about 1 o’clock. I then assigned macro 1 to control two octaves of the oscillator’s pitch. Like with the previous example, using macros will enable me to control the motion of the sound with one control.

Next, in 4 ENV, the amp envelope, I decreased the sustain, shortened the decay and lengthened the attack. This is how you can achieve the right articulation for plucked sounds like this one.

Furthermore, for the first filter, I used a bandpass to keep the sound discrete at the bottom of its rise and make it more and more prominent as it reaches its climax. The second filter is a highpass filter that helps to eliminate frequencies that are likely to conflict with other elements in the track. 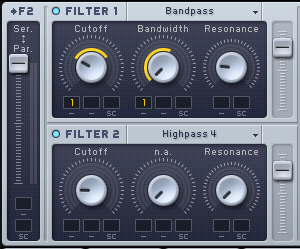 I added the chorus and reverb to create ambiance and take the effect out of the foreground. With macros on the dry/wet controls, the sound will get bigger as it pitches up and will create more tension.

Finally, in the voicing tab, I added 3 more voices, spread the voices using pan position and added some detune using the pitch cutoff. The detune is also tied in with Macro 1, which means that the voices will go more and more out of tune with each other, thereby creating even more tension.

Now we have our pitch up effect, here’s how it sounds:

For the last example, I’ve created a pitch down impact in Massive. Unlike the other two examples, this one would be used on “beat 1” of a new section. Since this patch relies so extensively on envelopes, it makes the most sense to start by setting these up. Both of these have similar shapes – with the sustain down and similar decay times.

The only thing to watch out for is attack time. Have a longer attack on the amp envelope.

Now, for the oscillator. Since we’re looking for a deep sound, I switched the wave to a sine-square and turned the wavetable position to about 3 o’clock. I made sure to send all of it into filter one and assigned the first envelope to the pitch.

Also, the filter consists of a daft lowpass filter. You could substitute this for any lowpass filter but I feel this one has the best sound for what we’re doing. I also applied envelope 1 to the cutoff so that the harmonics pass through as the fundamental goes below our audible range of hearing.

Again, like with the previous example, make sure the filters are in serial with the fader on the left.

That’s it for the basic patch. Here’s how it sounds:

Finally, the point of these effects is to use them to transition in a track. Here they are finally in context: