Unorthodox Low-End Boosting – How to Pump Up the Bass

People tend to have a lot of trouble with the low-end frequencies. This is why we will show you how to easily recreate the missing low-end using only one simple yet powerful tool!

The importance of the low-end frequencies in modern music doesn’t need too much emphasis. This is because most of the popular electronic music genres like House, Techno, Dubstep have their foundation in the low-end frequencies. In the past decades, the number one tool for manipulating the low end was, without a doubt, the equalizer. This is an unmistakable go-to approach, but it can`t help that much if you are working with a recording where the low-end got lost as a result of the bad microphone technique. Another example of low-end lacking would be the situation when the bass player uses a small bass cabinet incapable of catching that firm low-end sound after which the bass guitar sound is known.

In the next tutorial, I will try to show you how to easily recreate the missing low-end using the Mbassador by Melda Productions. It is a very simple yet powerful tool. It functions by re-synthesizing the missing low frequencies based on the signals existent mid-range harmonics. At the same time, it is composed of 4 basic modules which are a crossover and the three generators. Although the plugin contains a lot more parameters, in this tutorial, I will try to explain the mentioned four, which will be enough to represent the effect faithfully. 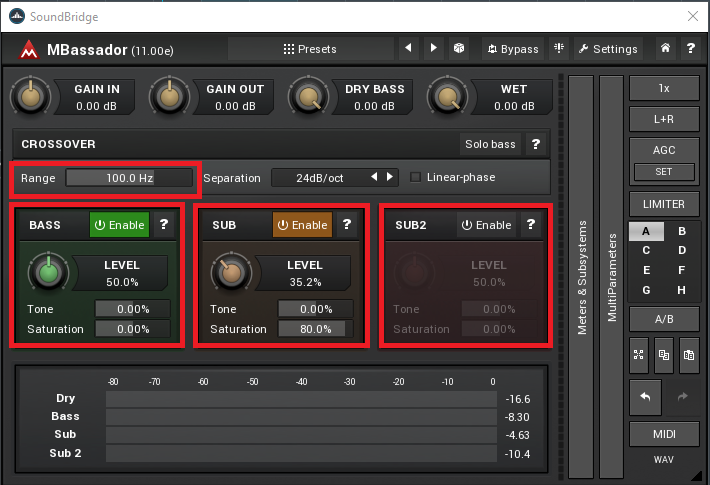 In the picture above, among other parameters available for control on the Mbassador interface, you can see 4 of the mentioned modules which are highlighted by a red frame. Firstly, the crossover section is in charge of splitting frequencies into 2 bands, and the highlighter range section sets the split frequency between them. So frequencies higher than the set value won’t be affected. Below, you can see those 3 highlighted modules containing the same parameters that are the core of this plugin.

First one, the Bass, regenerates the original harmonic that we’ve split by the crossover. With its level parameter, we are undoubtedly able to change the level of the original harmonic. So, by increasing the saturation, we can add higher harmonics. Clearly, this can be beneficial if the original low-end sound is lacking the higher harmonics so you can’t hear them on smaller speakers. You can, therefore, extend the spectrum of the sound towards the mid frequencies.

The next audio example made in Soundbridge will demonstrate how electric bass recording, which is lacking the low-end, sounds without and with Mbassadors first module engaged.

I believe you can clearly hear the significant increase in the low end.

Moving forward, we can see Sub and Sub 2 modules, which are two subharmonic generators. They produce subharmonics correspondingly one and two octaves below one generated by the first Bass module. Accordingly, the parameters of these two generators are the same as found in the Bass module. In most cases, combining the Bass and Sub module will be enough, but you can also engage the Sub2 module if it’s necessary. Let us hear how our Electric Bass recording sounds without and with Bass and Sub modules engaged.

Without any doubt, you can hear how the electric bass sequence is now sounding even more powerful. To give you a better insight here are a couple of audio examples which show how a drum loop, which is also lacking the low end, sounds without and with Mbassador.