Although it is true that there are many different types of audio processing effects out there, one of them called the Tape Effect is particularly used in today’s music production. It introduces gentle compression and subtle saturation to the audio signal. Besides that, it’s widely praised for its warmth, the epithet you probably heard more than once when talking about analog sound.

The effect type that we are talking about represents normal sound behavior, generated when using a tape recorder machine. Old tape recorders were introducing saturation, flutter, EQ bumps, etc. onto the incoming audio signal. Personally, I feel that one of the most significant advantages of the Tape Effect is coloring the audio signal by using harmonic and non‑harmonic distortions, such as those caused by transformers and inductors found in tape recorders. As a result, we get a smooth and warm sound.

Fortunately, nowadays we have a large variety of digital tape recorder emulators. On average, they roughly accurately produce the same Tape Effect. One of the emulators that I like using in my productions is Kramer Master Tape by Waves. It is modeled on the Ampex 350 valve tape machine, which is one of the most famous tape recorders from the past. 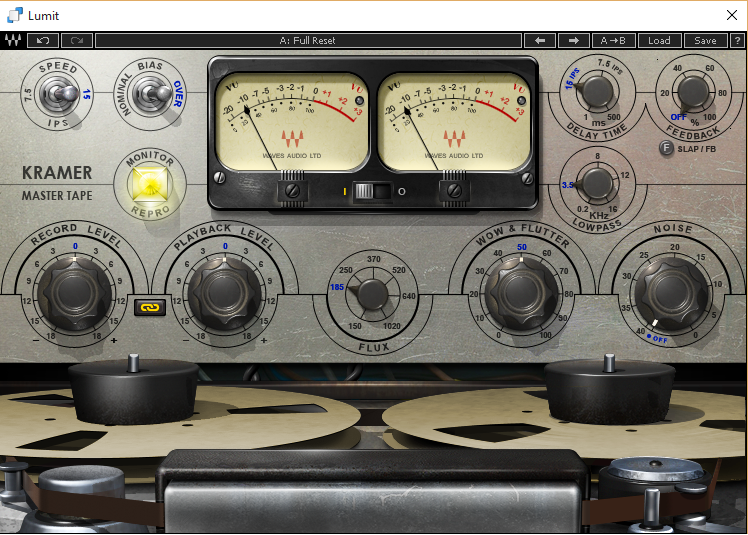 I am usually applying this effect when I need to tame the high frequencies in, for example, a rhythm group. Let’s check out a track I have started in SoundBridge. Inside you can see the rhythm group which includes both snare and hi-hat channels.

This group track is already mixed with the rest of the elements in the project but the high frequencies are much too harsh for my taste. Rather than using an equalizer to attenuate this part of the frequency spectrum, I will use the Kramer Master Tape.
Here is how the rhythm group sounds without the Kramer Master Tape plugin.

After that, I will place the Kramer Master Tape on the rack of the rhythm group track. Among a variety of different parameters within the plugin, crucial controls that I’ll be using in this example are the Flux, Record input and Record output. Pushing up the Flux parameter you can hear how transients of the high frequencies are becoming less and less expressed. In combination with the Record level input and output, you can further adjust the amount of the desired effect. Furthermore, the parameter called ‘Speed’ is determining the actual speed of the tape movement. This means that while on 7.5 ips the effect is introducing heavier cut on high frequencies, but you can also choose 15 ips mode which is sounding less extreme.

In conclusion, let us hear how the full mix sounds with and without the Kramer Master tape applied. I hope you’ll like it!