There are few things in music that capture the emotions of diehard fans more than vinyl records. The retro feel, combined with the analog warmth makes vinyl a beautiful nostalgic statement. Bearing this in mind, we have recently come across a plugin called Abbey Roads Vinyl by Waves Audio. Designed with Abbey Road Studios, this plugin truly captures every stage of the vinyl production and playback process. Moreover, you can choose between the sound of a pure acetate (lacquer) or the print master vinyl pressing from the factory. Finally, you can play the records on two distinct turntable types with a choice of three classic cartridges and even add the EMI TG12410 mastering console on the path into the vinyl lathe.

In the next tutorial I will use the Abbey Roads Vinyl plugin in SoundBridge: DAW, guide you thru its user interface and control parameters and finally show you some practical audio examples. 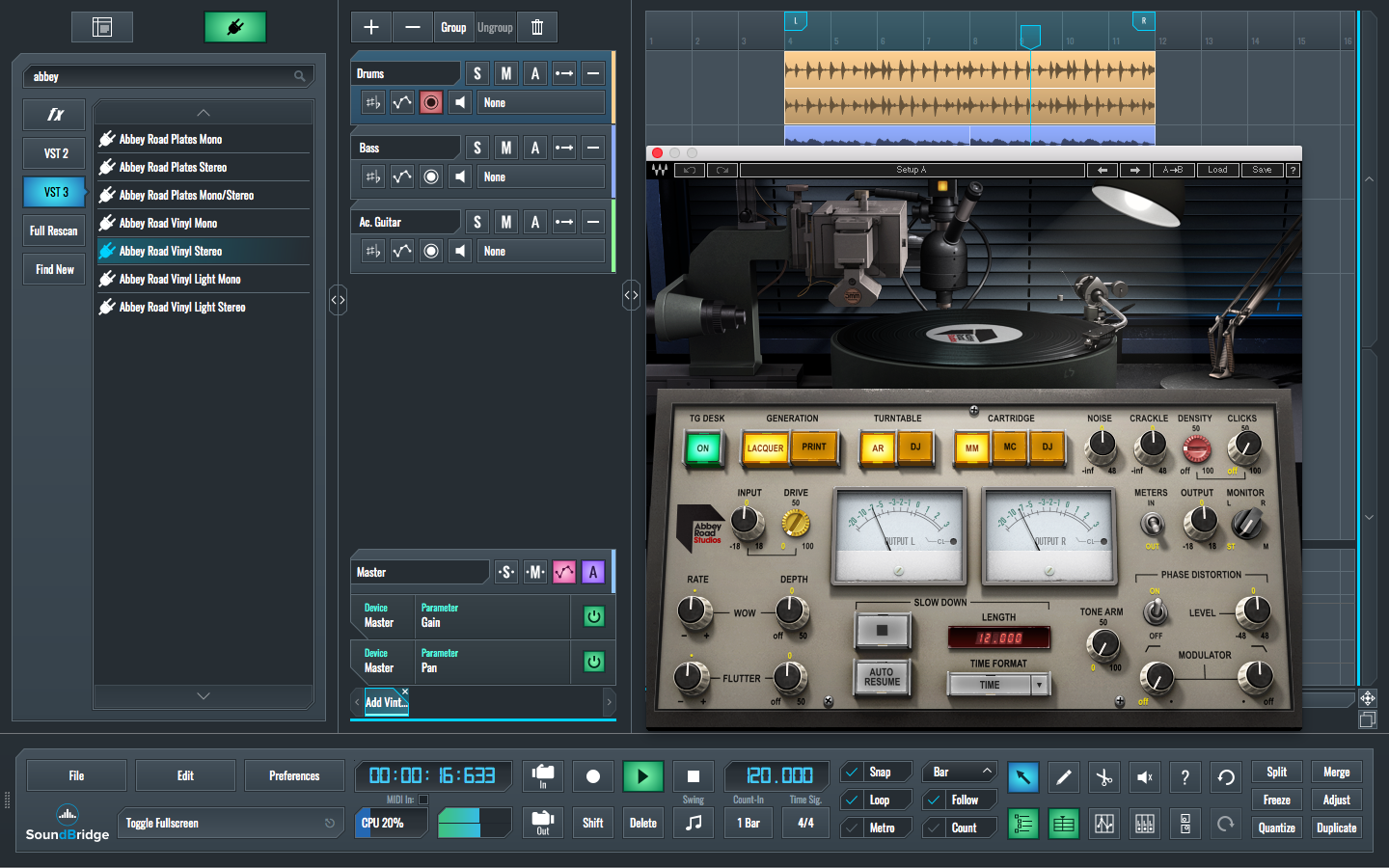 You can look at this interesting effect in two ways. On one hand, it can help you in getting very close to emulating a vinyl record. On the other hand, you can use it as an FX plugin which can introduce noise, crackle, clicks. Besides all that, it can also do a tape stop effect, or in this case, a record stops effect.

In the top part of the interface, we can see a line of LED kind of buttons which we will cover below.

Firstly, Generation – Select which generation of Vinyl production you wish to use:

Secondly, Turntable –  Select which turntable you wish to use for playback:

Finally, Cartridge – Select which cartridge you wish to use for playback:

In the same row, we have knobs for controlling the amount of Noise, Crackle, and Clicks. The middle part of the interface is reserved for Input and Output controls as well as Drive and Metering. Furthermore, the bigger portion of the lower part of the interface is taken by the Slow Down. Also, by tweaking these parameters, you can get that well-known record stop effect. Finally, there are sections for Wow, Flutter, Phase Distortion and Modulator parameters.

So, after a brief introduction of the interface and controls let me show you a few audio examples of how Abbey Road Vinyl sounds on drums, bass, and acoustic guitar.