The Philosophy of Stereo Widening Techniques

Stereo widening is an action that basically increases the perceived width of a mix or individual instruments. You can use it on just about any source. However, most professional music producers agree that elements with prominent low-frequency content like kick drums and bass should be mono. This is because phase issues are most noticeable in the low-frequency domain (See Blog: Phase and Phasing)

One can achieve a wide stereo image in a variety of ways like changing the phase, modifying the processing, using multiple delays, etc… Fortunately today, we have a variety of stereo expansion processors and plugins available to us. You can use them as insert FX on individual instruments, in parallel, or on a master bus. Nevertheless, to get the precise effect you want, you will have to study your arrangement and decide what sources need to be widened, and where they should be panned. Some instruments sound great with serial reverb, chorus, and delay. Others may get too smeared or wet.

One of the easiest ways to enhance stereo width is to simply move pan positions in your DAW. Accordingly, moving the knobs left and right shifts the output to respective spots in the “soundstage”. Even though instruments like kick drum and snare are typically left in the center, they are panned in my example for the sake of demonstration.

It goes without saying that in large concert venues, speakers are typically located all over the room. At these concerts, you hear a combination of the speakers sound and the sound coming directly from the source. However, If the signal from the mixing console were sent to the speakers instantaneously, the combination of sounds arriving at you would seem unnatural. In addition, in some spots, you would hear the speaker output before the source and it would be obvious that they were coming from two different places. Therefore, the Haas Effect is a counteraction to this unnatural sensation.

By slightly delaying outputs from the mixing engineer such that they are in sync with the arrival of the source sound rather than the propagation of it, the engineer is tricking you into thinking everything you’re hearing is coming from the stage. Recreating this electronically is another effective way to widen your stereo image. In combination with panning, it provides a significant ultra-wide feeling. The basis of this technique is doubling (of 1 mono track). The pan position of the original is set all the way to left and pan knob of the duplicate is set all the way to the right. After setting that up, we will disable the Snap option in the transport bar of the SoundBridge: DAW and slightly drag the duplicate audio event forward in time.

The Tonal Micro-shift Effect is somewhat similar to The Haas Effect. But, instead of delaying the signals, it widens by using subtle pitch shifting. Firstly, I will – again – hard pan the two recordings. After that, I’ll place a Soundshifter Pitch plugin by Waves on both of them. As an example,  I’ll increase the pitch by 50 cents (a quarter-step) on the first channel. At the same time, I will decrease the pitch by 35 cents on the second channel. 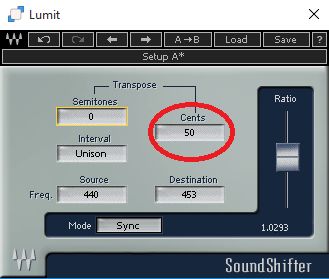 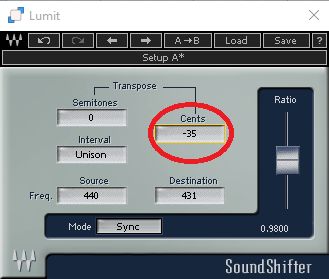