Processing vocals can be enjoyable, but at the same time, a painstaking process. In the 2nd half of the 20th century and the beginning of the 21st, a countless number of vocal processing tools and techniques emerged, which can help us make vocals more present, powerful, cleaner, and sit in the mix better. Check out the following tutorial and discover a tool that will help you in creating wider vocals.

Waves Reel ADT is an emulation of the famous Abbey Road Studios pioneering process of Artificial double tracking. The effect that would become an integral part of Abbey Road’s signature sound was initially created at the famed studios in the 1960s to meet the needs of some exceptional clients such as The Beatles. The story goes that John Lennon got tired of double-tracking his vocals. He was searching for an electronic way of creating a double-tracked vocal sound. So, what the engineers in the Abbey Road Studios ended up with is two tape machines running in conjunction with each other to create that “chorusy” kind of sound we know today of a double-tracked vocal.

The difference between this approach and the chorus is waste. The chorus uses a sine wave technology and therefore is very fixed. Consequently, it is noticeable that it is a chorus effect. On the other hand, this is a double-tracked effect, and the “flutter” and “wah” in tape machines are much more randomized. Therefore, this produces a better sounding “chorus” effect. It is particularly useful to make your vocals or guitars sound huge.

After the short introduction, let’s move to the description of the Reel ADT interface and some audio examples. I have added a short vocal phrase into a newly made audio channel within SoundBridge: DAW. Consequently, I inserted an instance of the Reel ADT on its channel rack.

You can see that the plugin shows an example of what the two tape machines are doing. 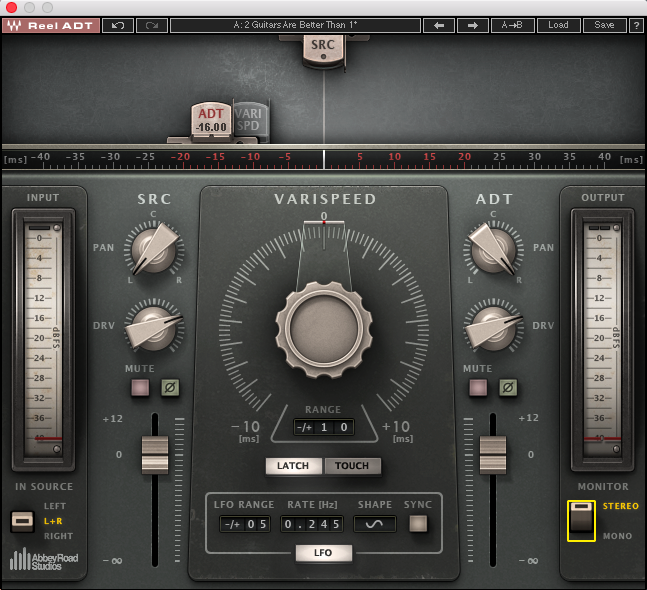 As you see in the picture above, the Reel ADT interface is pretty straightforward. Firstly, in the top section, we can see a representation of two tape heads. They show timing between the source signal and the ADT effect. The “SRC” in the top represents your fixed source signal. Furthermore, below that, we have the “ADT” which shows how much of the ADT signal is moved in milliseconds from the source signal. Lastly, the center of the interface shows a big dial parameter – “VARISPEED.” In my opinion, this is a critical feature of this plugin. Because of this, it differs from the standard chorus effect, meaning it is randomized. It can be controlled by an LFO, which values you can set below and assign it to SYNC or not, or you can record its movement by using your midi controller.

Left and right from the center section, we can see controls for panning, dry/wet, mute, phase shift, and gain fader of the source signal as well as the ADT signal. This comes quite handy for finalizing the processed sound. There are also dedicated meters for input and output, as well as switches for Stereo/Mono and Left/L+R/Right.

By making some of these adjustments, you can get a wide variety of controls. Once you had the basic setup the way you want, you can use the big “VARISPEED” dial to set the offset, which is the offset between the source and the ADT signal. Indeed, this is quite helpful if you want your vocals and other instruments to sound wide.

Now let’s hear a few audio examples, first with the unprocessed vocal phrase, and then processed with Reel ADT in a few different settings. In the last audio one, I will add a bit of reverb to finalize the processing of this vocal phrase.