Brighten Your Instruments with a Saturator Plugin

There’s no denying that the saturation effect has the potential to turn just about any harsh-sounding audio material into something warm and pleasant. It has been used for decades in music production as a hardware effect, but in the past decade, it became easily obtainable as a software effect version. Check out the following tutorial and learn how to produce powerful instruments with the help of a saturator plugin!

Quite a few different plugin companies made various emulations of the famous saturation hardware effects. Nonetheless, one of them that caught my attention because of its distinct sound and friendly interface. Bx_saturator V2 by Brainworx is an excellent tool which you can use to bring out quiet signals and complex mixes in a really natural way, without using compression. Additionally, you can brighten elements in your mix by purposely using state-of-the-art controlled distortion. The Bx_saturator is developed for mixing, mastering and sound designing and offers both M/S and multiband layouts.

In the next tutorial, I will demonstrate some practical examples to show you this plugin’s superior capabilities. But first, let me give you an insight into Bx_saturator’s advanced built-in technology such as the “True Split“ and “XL“ features. 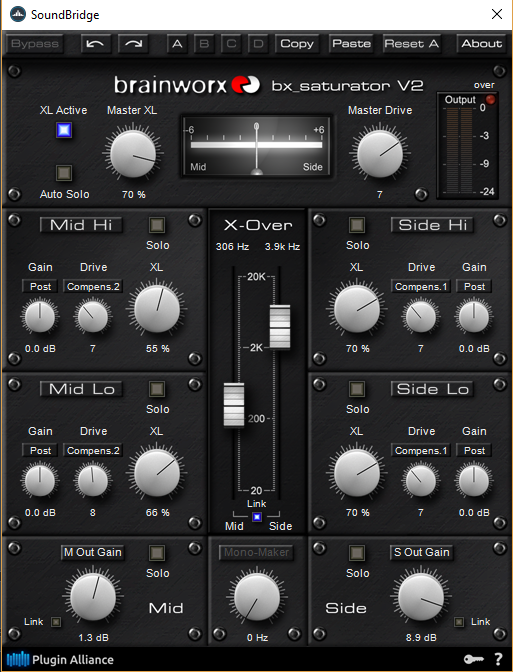 In the center of the plugins interface, we can see the “X-Over” section. This section is in charge of Brainworx patented “True Split“ crossover technology that ensures that Mid and Side channels are perfectly in phase all the time.

With the “ XL“ feature, you can create additional harmonics in order to balance the dynamics of the signal without using compression.

The master drive knob offers distortion, which ranges from subtle to heavy. The extra boost which affects the distortion can be achieved by increasing the section again in the pre-made, while in post mode it can be used to balance the volume of the 4 individual sections (Lo Mid, Hi Mid, Side Lo, Mid Lo).

Furthermore, with the “Mono Maker,“ you can mix your low end to mono while leaving the rest of your mix stereo. Adding a lot of distortion can increase the volume of your mix, so make sure to monitor the meters in the upper right section. It is possible to adjust the output gain for both mono and stereo signal individually, or you can link the two. Finally, the output gain of the S channel even lets you adjust the stereo width.

After introducing you to the basic functions of this awesome plugin, let me demonstrate how it performs on drums, synth bass, and guitar.

Firstly, listen to my drums without and with the plugin processing.

Then, let’s hear the analog synth bass gain without and then with the Bx_saturator processing.

For the end, let’s, check out the short guitar riff.