Before I start, I should disclose that using solely visual clues to help you mix and master will never work out. You could have a waveform that looks similar to your favorite track but sounds like garbage because the compressor so dramatically treated it. What visual clues can do; however, is divulge the next process may exacerbate problems you may not be hearing on your system or that.

All of these clues are geared towards those looking to use compression correctively, in a non-creative way. Meaning, if you’re trying to create an effect or a sound design with a compressor, this is not the article – try Trash Your Sound: Distortion.

You probably have too much post-gain, or, your attack time is too slow.

This is perhaps the most preventable of compression issues. Sometimes you get the ratio and threshold just right, but you come in too hot with the gain; and, sometimes the input is really hot, and your threshold isn’t set low enough to soften it.

If there is clipping in the recording: Have the track re-recorded.

If the clipping is from your compressor: I would recommend resetting the gain to 0 dB on your compressor, rendering the output and taking a look at the compressed waveform. It often helps to separate the compression step from the post-effect gain step. This way, you can see how much headroom you actually have and can make sure the waveform is still healthy before boosting it. By looking at the compressed waveform, you literally see the effect of dynamic range processing. Rendering audio to a new track is a piece of cake in SoundBridge. Simply open the freeze dialogue, enable freeze to “new track”, select the track, and hit OK. Notice how the lower waveform in the picture below looks much denser than the uncompressed and even has gain applied, yet it is not clipping. 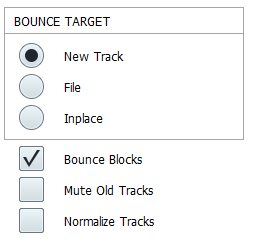 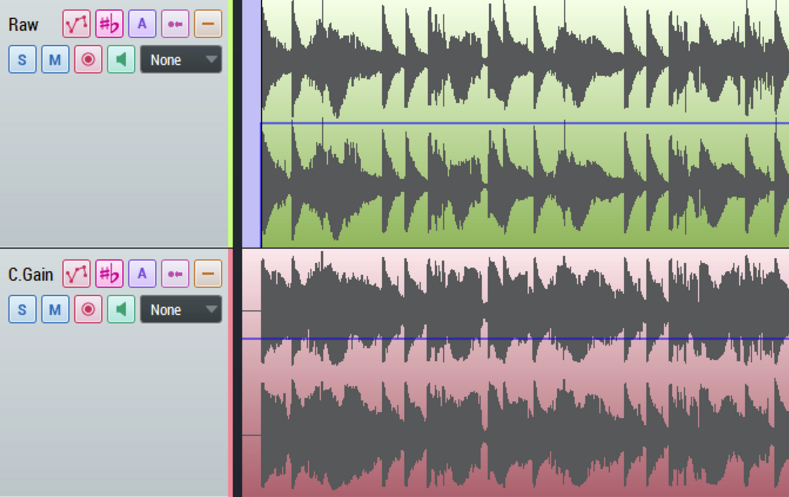 Be careful. The higher the compression ratio, the more squashed the transients above the threshold will be, and the more added content there will be. On the other and, if the ratio is too low, you may not have enough room to get the track to the master level you want. It is up to you and your ears to decide how much of the dynamic range you are willing to sacrifice to make the track louder.

~ Cleaner kick at the cost of a higher noise floor.

Remember, when you turn up the compressed signal you’re weakening the signal-to-noise ratio. Generally speaking, you don’t want to have to do this. It is better to ask for a less dynamic mix than to have to squash all the loud stuff and upward compress the result.

Maybe you need some look-ahead to compensate for latency.

Option 1 (ideal): To preserve the transient of the source, you should first try bringing down the level of the percussive sound and not compressing at all. This way, the peaks come down in the mix but are not timbrally altered by the compressor.

Option 2: Try compressing the percussions individually instead of in a mix. If you choose this option, I would not recommend and further compression on them – give them their signal chain or their master bus.

Option 3: Try making some adjustments to the compressor. Your compressor will need a quick attack like 1 ms to catch the percussions and perhaps some look-ahead time too. Maybe something like 3 ms. I would recommend soloing the sound in question and listening to it in isolation with compression. Find a balance between preserving the character of the sound and making it louder. Notice that the waveform in the image below is rid of those sharp transients you see in the image above, ensuring some needed headroom. This is a healthier waveform but not an ideal fix because it changes the character of the transients of percussive sounds.

~ Improved with a 5 ms look ahead.

3) STUFFED IN A TUBE

Your threshold is too low for the ratio, or, your ratio is too high for the threshold.

You may have gotten your dynamics flattened out, but at the price of a lot of gain reduction and distortion. Bringing the gain back up will exacerbate all added content from the compression, severely weakening the signal-to-noise ratio. If you find yourself in this predicament, you’ll need to go back a step or two.

Option 2: Go back to the compressor and try bringing the threshold up a bit. This means instead of squashing the majority of the signal, you’re only squashing the louder content. If this doesn’t sound clean, try option 3.

Option 3 (ideal): Try using two compressors in serial instead – one to upward compress the softer content followed by another to downward compress the loud peaks. The image below shows how the waveform has transformed after each compression stage. Notice how the third waveform is less dynamic than the first two, has more headroom, and is not clipping. 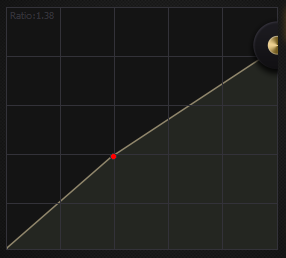 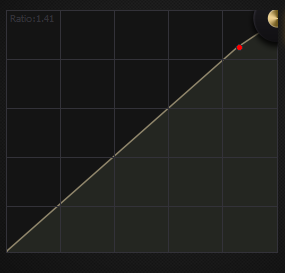 ~ Improved by using Serial Compression instead.

Your release time probably too long.

~ Percussive sounds “swallowing” the rest of the arrangement.

Option 1 (ideal): Ask yourself.. “Do I want to make all this louder, or do I just want the loud stuff to be quieter?”. If the latter is your answer, try using a limiter with a higher threshold and ratio instead of a compressor (they are separate units in SoundBridge). The release time can be a little longer, but it will only affect the top of the waveform.

Option 2: Shorten the release time. Then, listen carefully and estimate for how long the sound(s) you wish to compress is(are) undesirably loud. Try tweaking the release parameter from that point. The image below is the same source with the same threshold and ratio – but a release of only 50 ms.

~ Improved by shortening the release time to 50 ms.