Within the scope of music production, the phase has always been a concept most applicable and best understood in the context of audio recording. Within the sample based community, it is scarcely talked about, yet it remains a quintessential part of getting a full sounding mix. In this article, I will speak of phase within the realm of electronic production as I walk through some techniques that will help you craft a better sounding mix. For more info on phase in acoustics and electronics visit Phase and Phasing.

What is a phase?

A phase is a relationship between the cycles of different periodic waves. A full cycle is broken up into increments from 0 to 360°. When comparing two or more identical waveforms, the difference in their starting positions is measured in degrees. Here are the four most significant phase relationships:

This is the optimal position for reinforcement. Here, both waves are perfectly in phase. This is – most often – the way we like to see similar or identical waves aligned. I will talk about this more in detail a little later.

In this example, the second wave is displaced approximately 90 degrees from the first wave. Relative to the sum of waves above, the sum below seems a little quieter and slightly “sharp” because of the alternating periods of peak alignment and misalignment (this is essentially what “phasing” is).

In the third example, the bottom wave is displaced by 180 degrees compared to the top wave. When we invert the phase of a wave, the sign of all values gets inverted (negative values become positive and vice versa).

This example would be silent because the two waves have completely canceled each other out through destructive interference.

In this relationship pictured below, the bottom wave is shifted 270 degrees relative to the top. Looking from a different perspective, the first wave is shifted 90 degrees from the second one. This means it will sound the same as the 90 degrees example because, without a visual component, all we can sense is the magnitude of the difference in phase positions.

Why is it important?

Phase relationships are important to engineers as well as producers and sound designers. This is because out-of-phase occurs in both acoustic spaces AND in recordings. When two or more sounds exist in the same medium and occur simultaneously, what we hear (the resultant wave), is a complex sum of all waves. When two identical waves occur in phase, they reinforce each other. The peaks and troughs line up. The voltages double and create a twice as loud, fuller sound. This is constructive interference.

On the other hand, if two identical waves are completely out of phase (example 3), they cancel each other out. If you add +1 and -1 you get 0. Furthermore, the positive and negative values summed are always  0. Destructive interference is often the science behind equalization and isolating/removing frequencies.

I hope you’ve gained some visual and auditory understanding of how phase impacts a mix of sounds. Let’s look at how phasing applies to our production.

The phase is most relevant when talking about lower frequency sounds because they have longer wavelengths that have more space and time to interfere with each other. This means, when talking about drums, the phase will be most problematic on your kick.

The previous examples were purely demonstrative. I used identical layers to make the phasing obvious. In practical application, this generally won’t be the case. When layering kicks, since your layers will have different waveforms, it’ll be impossible to superpose them coherently. Nevertheless, it is still possible and crucial to align the first cycle of the wave at the start of each kick layer.

As you can see in the picture, the sample has a margin of space before it kicks in. I’ve placed the marker at the start of the first peak. If I do this to multiple drum layers, the first peaks will create constructive interference and boost the signal at the transient. This will help it cut through the mix.

Shifting waveform layers in degree increments is tedious and not valuable use of time. There is something that you can do to find an optimal phase relationship quickly; samplers like Native Instruments’ Battery give you the ability to invert the polarity of a sample.

The button will look something like this. When two waveforms aren’t identical and don’t mesh, one of the two polarities will sound better on one of the samples. Swapping the polarities of both samples does not affect.

Next, I layered two kicks in Battery 4, bounced them as one kick to audio and then went through the same process with one of the kicks phase-inverted. In this audio example, the first two kicks are the bounces before the phase inversions, and the next two have one of the sample’s phases inverted. Sonically, the difference is not apparent, but if you compare this with visual aids, you’ll understand how severely phase is actually impacting the sound.

It becomes clear when looking at the waveform that the bottom kick has a denser transient and a thinner tail. On the other hand, the top kick has a thinner transient but a more substantial tail. “Which kick is better?” remains a subjective question. The bottom kick would punch through the mix more while staying out of the sub’s way. The top kick is boomier and has more sub-content. This round, low-end presence would – most likely – cause it to interfere with the sub.

If we look at a level meter for each of these samples, we can get more clues as to which kick is louder.

The top kick is hitting just above -1 dB where the bottom kick is hitting about 1 dB lower. The difference in loudness is a result of the inconsistent low-frequency presence. Sub frequencies swallow a lot of headroom, and the boomier kick has more of them. 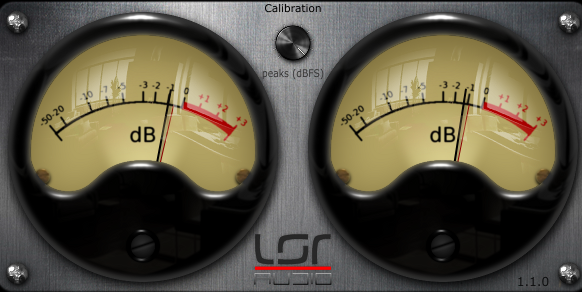 We could boost the bottom kick 1 dB to match the level of the other even though they sound about equal in perceived loudness. The result gives us a clearer and more balanced kick that punches through the mix without interfering with sub frequencies.

Drums are not the only element that we can apply our phase knowledge to. Wavetable synths like NI Massive layer different waveforms to create various sounds. By default, Massive triggers each oscillator at a random phase position. So, this means the phase relationships between oscillators will vary each time you play a note. 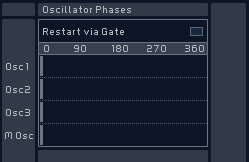 Same patch – with restart and sliders moved to unity

As you can hear, the different phase settings have a certain impact on the tone of the sound, like the difference between “ah” and “oo”. With Restart via Gate on, you can set the start phases in positions that reinforce the sound and makes it more prominent. The patch above is nothing more than three oscillators playing basic waveforms, so the phasing is not very complex. Phase relationships can change over time when you start to add detuned voices and modulation to your patch,

The concepts I have discussed should help you get better mix results. To be sure, I was careful to talk strictly about the phase in the context of sampling and electronic production because there is a lot of substantial content on phasing (like phase-friendly mic placement and reflectivity treatment) already our there. If you are recording guitar or vocal parts, make sure the phases are aligned and the mics are placed in positions conducive to healthy phase relationships. However, this is a tedious task to try to do digitally, one that may require you to go to every note and align them individually.