Most techniques that are used to synthesize sound are based around the source and modify concept. To illustrate my point, one element produces the sound source while another element changes it over time. This concept is more obvious in simpler, commercially successful methods like subtractive and additive synthesis and more abstracted in complex methods like FM and physical modeling.

For the most part, methods of analog synthesis have three main areas. These areas are subtractive, additive, and wavetable. However, producers often combine them.

Typical subtractive methods include a rich source and a filter. The basic idea is to take out (subtract) some content in a harmonious signal such that the output is something unique and new. Furthermore, it is most effective on waveforms with a lot of harmonics like the sawtooth. The filter is usually a low pass with a resonant cutoff. Moving this cutoff produces that characteristic sweep that sort of sounds like owowowowo. Here is a diagram and digital emulation of the technique. 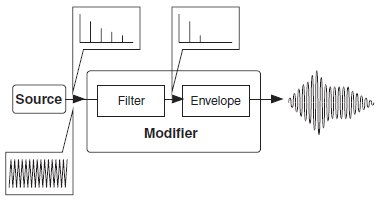 This method combines sine waves to produce rich timbres for the source. When you combine sine waves, they interact with each other to form a composite, often complex, wave. This setup is limited in the analog domain. This is because you can only have so many oscillators running.

This method is a more complex take on subtractive synthesis. You start with a source that has a lot of content and take components out of it using filters. Therefore, in wavetable synthesis, you can start with: sophisticated waveforms, multiple cycles of a waveform, or even a source that periodically alternates between multiple waveforms. Consequently, gritty, hard, sounds are characteristic for this method.

Digital conversion technology extended the boundaries of synthesis ten-fold. With the ability to replace a signal with a stream of numerical values and process them, we can change and affect the source before sending it out to analog again. This is an ever-growing field of sound design. Yet, it has its roots in analog techniques.

The digital age invented additive synthesis in a very significant way – you no longer have the physical limitations on oscillators. With enough memory and RAM, you could – theoretically –  make white noise from scratch. Digital additive synthesis is popular but requires a bit of intellect and basic knowledge of the harmonic series to predict how the wave’s shape is going to evolve when adding content.

For example, Massive is an additive synth, but can also be implemented as a subtractive synth as well as a wavetable. It depends on what modules and types of oscillators you use. Notice in the picture below I have added 3 sine waves together at different frequencies. You can hear the harmonics enter gradually in the audio example. This is an additive technique. 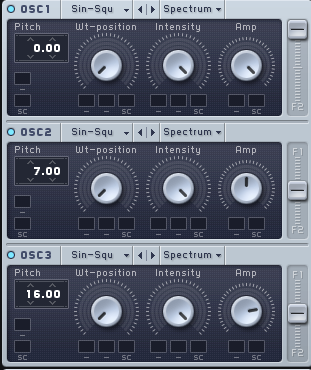 Digital wavetable synthesis is a more complex invention. For example, you can make composite waveforms out of segments, sample recordings, and loop parts of a sample. Here is a wavetable I drew in Absynth.

Frequency Modulation (FM) is how radio works. The input signal (speech and music from the station) is the modifying signal and the super high frequency broadcasting signal used to carry the source is the carrier. So, when that carrier frequency is modulated by the source, it broadcasts that source as well. In frequency modulation sound synthesis, both the modulator and the carrier are at audible frequencies. This induces complex, rapid phase interactions (See blog: Phase and Phasing)  that add content to the signal called sidebands or combination tones and, ultimately, produce a different timbre.

To summarize, the advantage of FM synthesis is the creation of a wide plethora of textures with just one subtle turn of a knob. The disadvantage is that it is difficult to predict and plan out sounds without a lot of practice. (See blog: FM synthesis). In the picture below, I have set up FM8 with an oscillator modulating the carrier at a ratio of 3 to 1. Notice all the components in the spectrum with just 2 elements.

Sample replay is yet another inventive revision of wavetable synthesis. These synths replay complete samples of a sound. However, they allow looping and sustaining of certain parts with MIDI. This is currently a very popular sound creation method but uses a lot of memory and is high in CPU.

This is the melting pot of techniques. It uses replayed samples, wavetables, additive shaping, and filtering. In addition, sounds made using S&S are often loaded into the sound banks of electronic musical instruments and samplers and further affected there. Furthermore, the technique has many pseudonyms such as Hyper Integrated and Expanded Articulation. Absynth is a good example of a synth that deals with samples, synthetics, filters, and effects. With this in ind, check out this sound I made with just one MIDI note and some automation. It involves 3 oscillators, some filtering, looping, and pitch shifting. 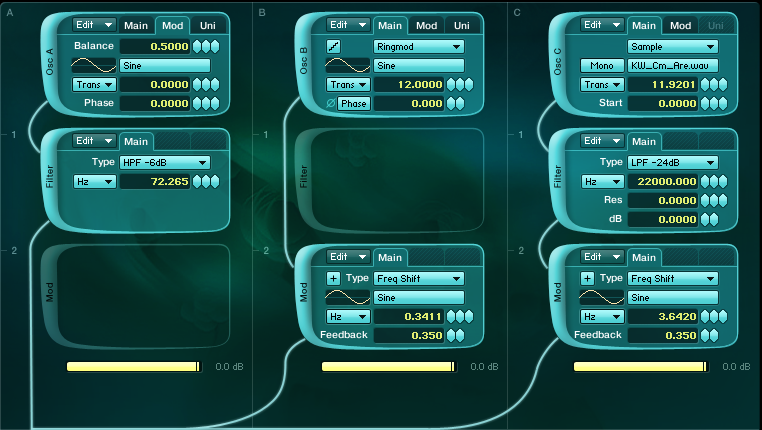